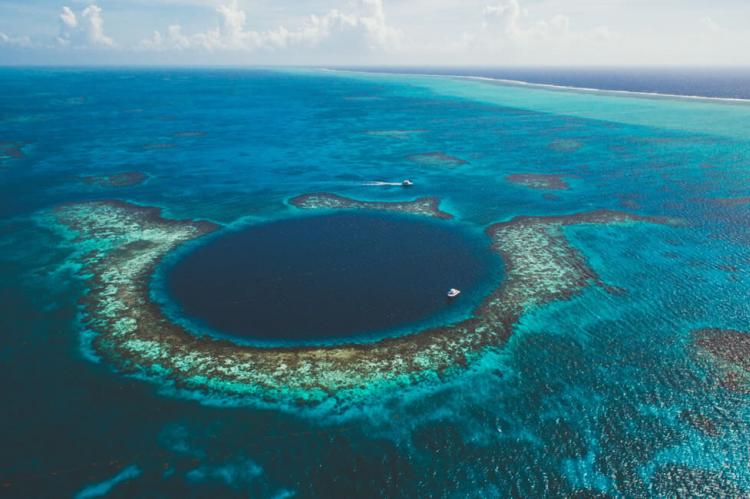 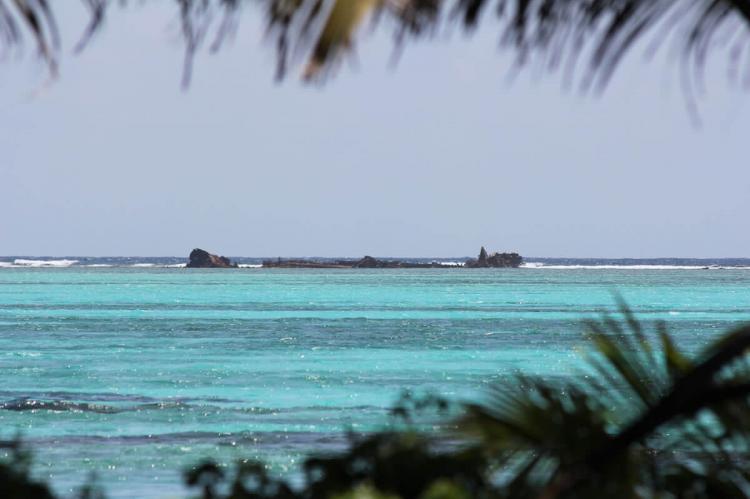 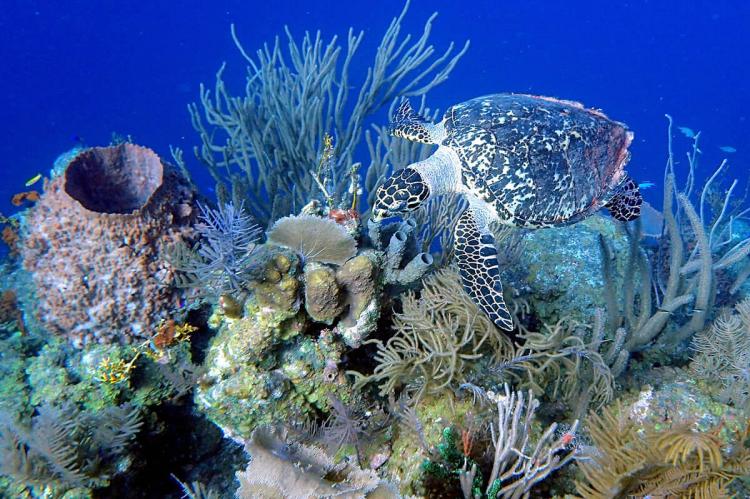 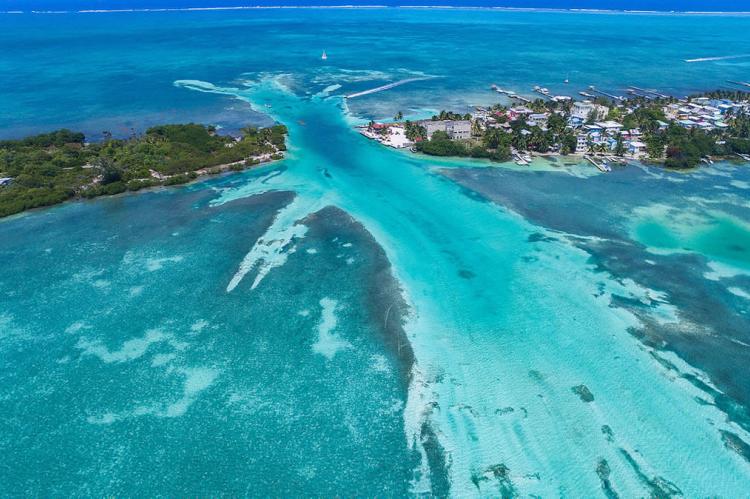 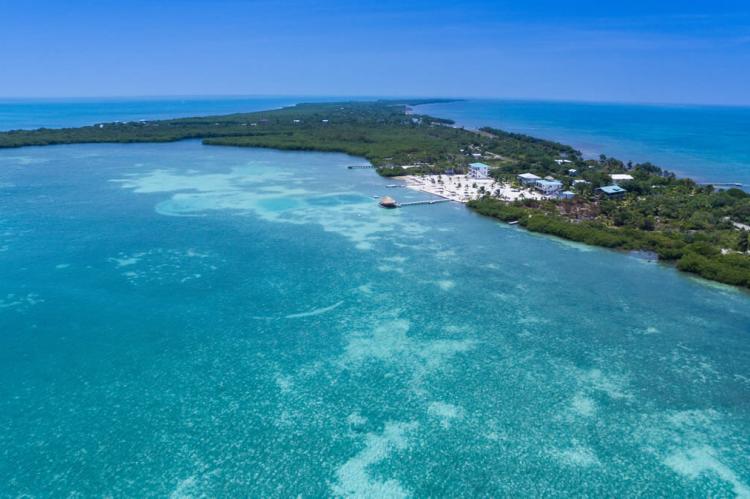 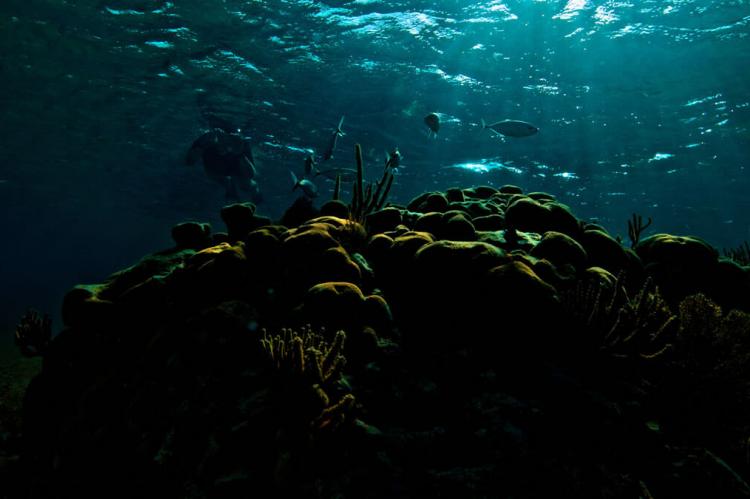 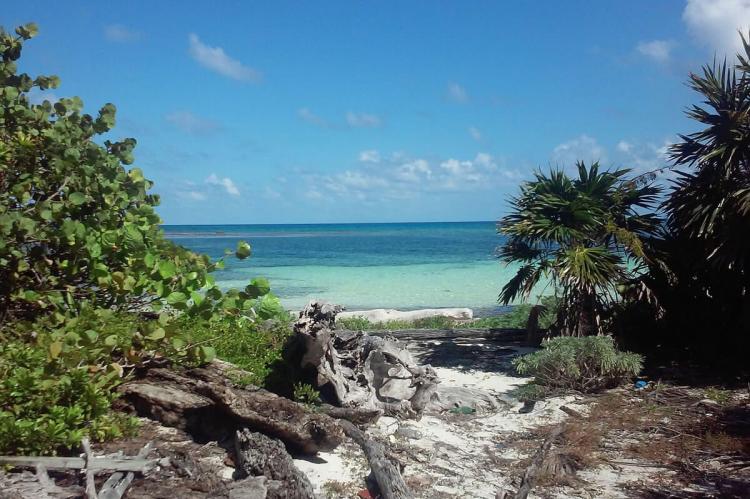 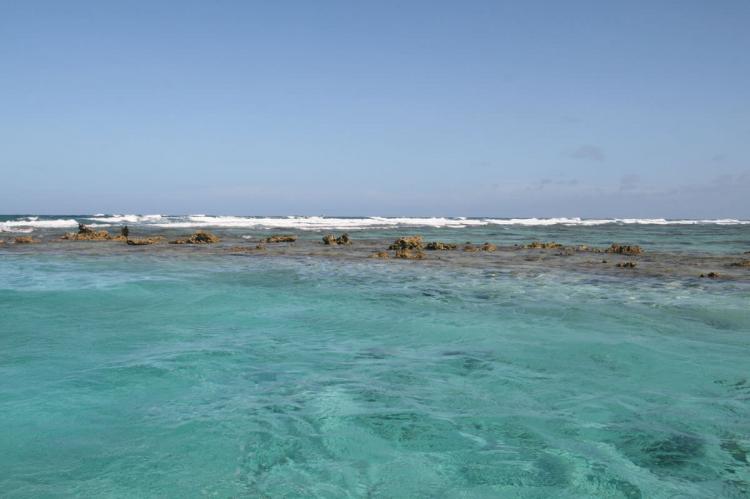 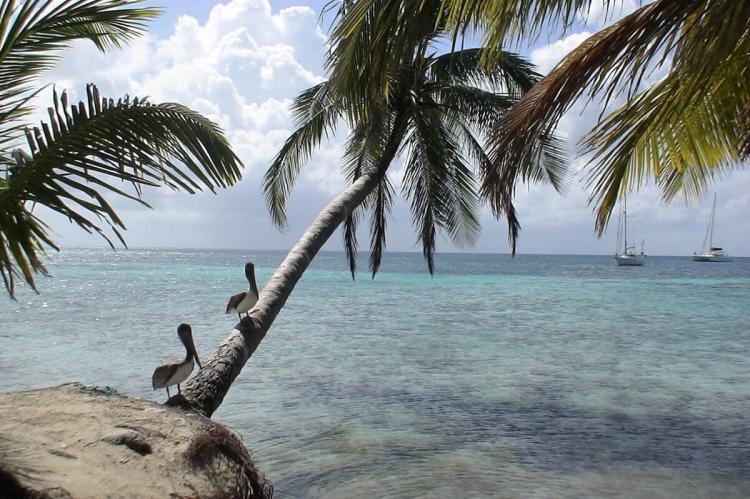 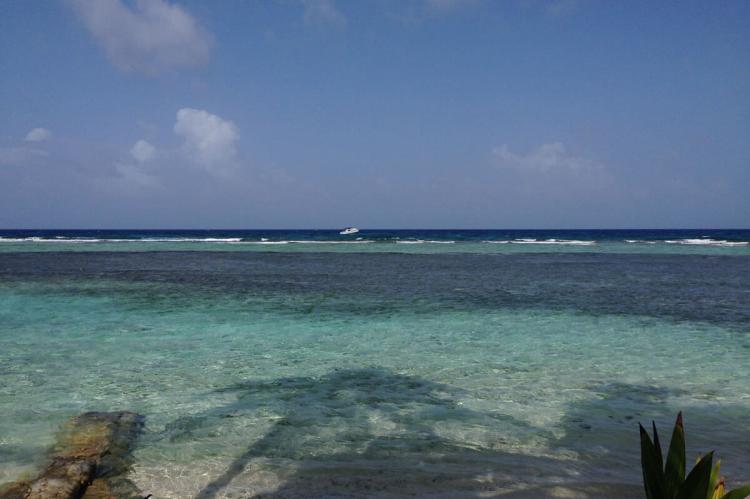 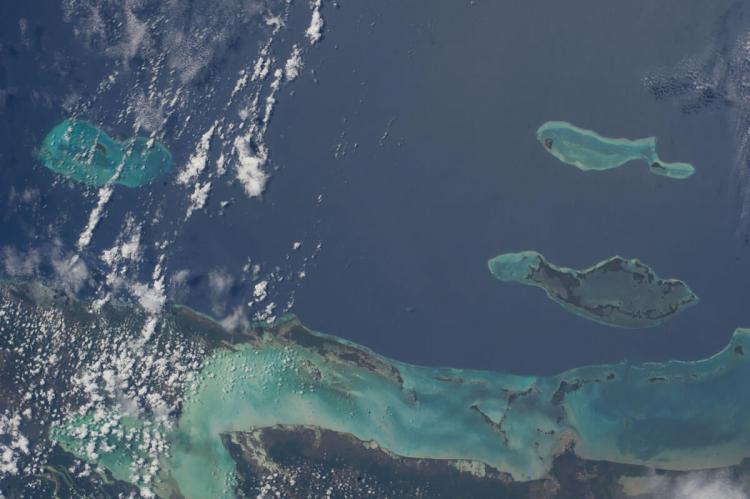 The unique array of reef types within one self-contained area distinguishes the BBRRS from other reef systems. The site is one of the most pristine reef ecosystems in the Western Hemisphere.

Approximately 247 taxa of marine flora have been described within the BBRRS and over 500 fish, 65 sceleritian coral, 45 hydroid and 350 mollusc species have also been identified, in addition to a great diversity of sponges, marine worms and crustaceans.

The Belize Barrier Reef is a 300 km (190 mi) long section of the 900 km (560 mi) Mesoamerican Barrier Reef System, which is continuous from Cancún on the north-eastern tip of the Yucatán Peninsula through the Riviera Maya and up to Honduras, making it the second largest coral reef system in the world after the Great Barrier Reef in Australia.

The coastal area of Belize is an outstanding natural system consisting of the largest barrier reef in the northern hemisphere, offshore atolls, several hundred sand cays, mangrove forests, coastal lagoons and estuaries. The system’s seven sites are a significant habitat for threatened species.

The Belize Barrier Reef is one interconnected system comprised of seven marine protected areas located along the length of the barrier reef, the shelf lagoon and offshore atolls.

It is the largest barrier reef in the Northern hemisphere and represents all the main reef and coastal habitats, including rare littoral forest on sand cayes that are home to endangered flora and fauna.

The reef complex is comprised of approximately 450 sand and mangrove cayes. The seven protected areas that constitute the BBRRS comprise 12% of the entire Reef Complex. The unique array of reef types within one self-contained area distinguishes the BBRRS from other reef systems.

The Belize Barrier Reef is unique in the world for its array of reef types contained in a relatively small area. As the longest barrier reef in the Northern and Western Hemispheres and distinctive on account of its size, array of reef types and the luxuriance of corals thriving in a pristine condition it provides a classic example of the evolutionary history of reefs and reef systems.

The rise and fall of sea level over the millennia, coupled with natural karst topography and clear waters, results in a diverse submarine seascape of patch reefs, fringing reefs, faros, pinnacle reefs, barrier reefs as well as off-shelf atolls, rare deep water coral reefs and other unique geological features such as the Blue Hole and Rocky Point where the barrier reef touches the shore.

Outside of the Belize Barrier Reef complex, the property contains three atolls: Turneffe Island, Lighthouse Reef and Glover’s Reef. The Barrier Reef and atolls exhibit some of the best reef growth in the Caribbean.

Home to a diverse array of top predators, on land, sea and in the air, the jaguars of Bacalar Chico, the great hammerheads of the Blue Hole, and the ospreys of Glovers Reef are a testament to the property’s importance and its ecological integrity.

The Belize Barrier Reef Reserve System is one interconnected system comprised of seven marine protected areas located along the length of the barrier reef, the shelf lagoon and offshore atolls.

Bacalar Chico National Park and Marine Reserve is located on the northern part of Ambergris Caye. It exhibits a high degree of diversity of habitats, encompassing swamps, grasslands, and various tropical forest assemblages including a medium semi-deciduous forest and a rare littoral, or beach, forest.

Marine habitats include extensive tracts of mangrove and sea grass beds, patch and barrier reef, and the largest lagoon on the island of Ambergris caye, Laguna de Cantena.

Within the park, all six species of cats native to Belize have been recorded, including the jaguar and puma. The forests are also home to a population of the endangered White-lipped Peccary.

The mangroves and sea grass beds are home to manatees and crocodiles. Near Rocky Point lies the largest nesting beach for loggerhead and green sea turtles in Belize, and one of the largest for hawksbill turtles.

The Great Blue Hole is a giant submarine sinkhole off the coast of Belize which lies near the center of Lighthouse Reef and is part of the larger Belize Barrier Reef Reserve System.

The hole is circular in shape, over 300 m (984 ft) across and 108 m (354 ft) deep. It was formed during several episodes of quaternary glaciation when sea levels were much lower.

It is a popular spot among recreational scuba divers who are lured by the opportunity to dive in sometimes crystal-clear water and meet several species of fish, including Midnight Parrotfish, Caribbean reef shark, and other juvenile fish species.

Half Moon Caye Natural Monument was the first nature reserve to have been established in Belize under the National Park Systems Act in 1981 and first marine protected area in Central America.

The caye is located about 50 miles (80 km) south-east of Belize City at the southeast corner of the Lighthouse Reef Atoll, which is the outermost coral atoll of Belize's three atolls.

The Half Moon Caye Wall is a well known dive spot called the “6,000 feet of vertical abyss”. Within this structure, divers will be able to see a diversity of marine life including corals, garden eels, sponge formations, eagle rays, sea turtles and groupers.

The littoral forest, composed primarily of the orange-flowered siricote tree, provides an endangered and fragile habitat that supports one of the only viable breeding grounds for the red-footed booby colony in the western Caribbean.

The booby colony supports the forest’s stability by providing guano as fertilizer. It is also a habitat tor the endemic Island leaf-toed gecko (also known as the Belize Atoll gecko) and Allison's anole lizard.

The southeastern part of the island serves annually as a sea turtle nesting ground from May to November for the loggerhead, hawksbill and green turtles: all endangered species.

South Water Caye Marine Reserve is the largest marine reserve in the Stann Creek district of Belize. It is located approximately 15 miles southeast of Dangriga town. It was established in 1996 and covers 47,702 hectares (117,870 acres) of mangrove and coastal ecosystems.

It includes the crown reserve of Man of War Caye, a nesting site for the brown booby and magnificent frigatebird. The reserve includes a mosaic of coastal and marine habitats including rare littoral forests, mangroves, seagrass beds, and a diversity of coral reef types.

Glover’s Reef Marine Reserve is a partially submerged atoll located off the southern coast of Belize, approximately 45 kilometers from the mainland. It forms part of the outermost boundary of the Belize Barrier Reef, and is one of its three atolls.

The oval-shaped atoll is 32 km (20 mi) long and 12 km (7.5 mi) wide. The interior lagoon is dotted with around 850 reef patches and pinnacles rising to the surface.

A large spawning site for the endangered Nassau grouper (Epinephelus striatus) is located at the northeastern end of the atoll. It has been identified as one of only two viable sites remaining for the species, of nine originally known locations.

In 2002, it was declared a special marine reserve, permanently closed to fishing.

Laughing Bird Caye National Park is an island located 11 miles off the coast of Placencia Village in the Stann Creek District of Belize on the western side of Victoria Channel.

It is a long island that sits on an unusually long narrow ridge of reef called a faro. A faro is an angular atoll on a continental shelf, which is also called a shelf atoll.

Similar to other atolls, a faro has a steep drop off and has a central lagoon enclosed in the reef. This Laughing Bird Faro is separated from the mainland and the barrier reef by deep channels all around the faro.

Due to the uniqueness of the Caye, the Faro, and the abundant and diverse marine habitats and life found there, the Caye was declared a protected area in 1981.

Sapodilla Cayes Marine Reserve is an uninhabited atoll in the Gulf of Honduras. The marine reserve covers an area of approximately 125 square kilometers and includes fourteen sand and mangrove cayes along the southernmost tip of the Belize Barrier Reef, nearly 40 miles due east of Punta Gorda.

The outer portion of the reserve is characterized by shallow water reefs which occur as a fringe around the cayes. The depth of water over these fringing reefs is often less then 15 feet, and some of them are exposed at low tides.

The drop off east of the islands is gently sloping, in contrast to the near vertical walls further north and surrounding the outer coral atolls. The outer reefs support a wide variety of fish.

Often, large schools of jacks or spadefish will feed just off the outer slope. Nearer the bottom, angelfish, parrotfish and snappers begin to dominate. The waters are often spectacularly clear as water from the Caribbean washes over and through the reef cuts.

The lagoon area is characterized by silt, sand and shallow seagrass beds. Some of the most pristine reefs of lettuce coral carpet the ridges which jut into the lagoon from the barrier reef. As the depth increases, the lettuce coral gives way to more coral diversity, and more sponge and algae species.