The Caribbean Sea and Caribbean Basin are a body of water and suboceanic basin of the western Atlantic Ocean. The entire area of the Caribbean Sea, the numerous islands of the West Indies and adjacent coasts, are collectively known as the Caribbean. 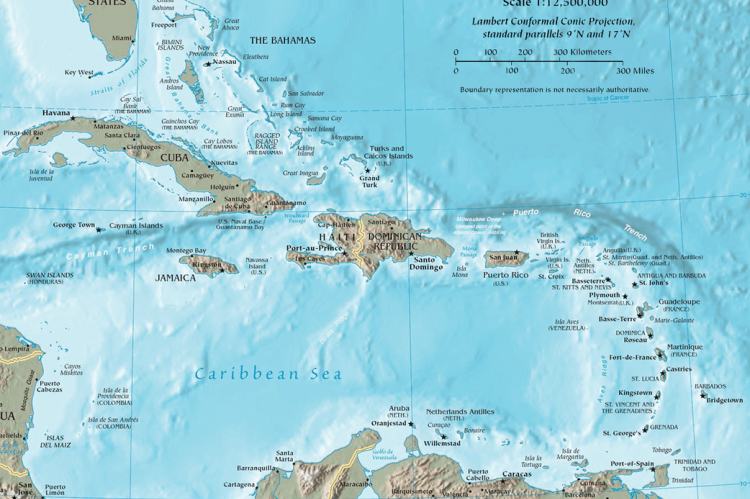 The Caribbean Sea is a body of water and suboceanic basin of the western Atlantic Ocean, located in the tropics of the Western Hemisphere. It is an oceanic sea largely situated on the Caribbean Plate.

The entire area of the Caribbean Sea, the numerous islands of the West Indies and adjacent coasts, are collectively known as the Caribbean.

The area is bounded by Mexico and Central America to the west and southwest, to the north by the Greater Antilles, to the east by the Lesser Antilles, and to the south by the north coast of South America. The Caribbean Sea covers an area of approximately 2,754,000 sq km (1,063,000 sq mi).

The Caribbean Sea is divided into five submarine basins, each roughly elliptical in shape, which are separated from one another by submerged ridges and rises:

Because of its physical-chemical conditions, the Caribbean Sea has large areas of coral reef and seagrass pasture. The sea has the world's second biggest barrier reef, the Mesoamerican Barrier Reef. It runs 1,000 km (620 mi) along the coasts of Mexico, Belize, Guatemala and Honduras.

The climate of the Caribbean is driven by the low latitude and tropical ocean currents that run through it. The principle ocean current is the North Equatorial Current, which enters the region from the tropical Atlantic. The climate of the area is tropical, varying from tropical rain forest in some areas to tropical savanna in others. There are also some locations that have arid climates.

The region has a high level of biodiversity and many species are endemic to the Caribbean. The vegetation of the region is mostly tropical but differences in topography, soil and climatic conditions increase species diversity. In shallow water flora and fauna is concentrated around coral reefs where there is little variation in water temperature, purity and salinity. Leeward side of lagoons provide areas of growth for sea grasses.

There are 90 species of mammals in the Caribbean including sperm whales, humpback whales and dolphins. There are 500 species of reptiles (94% of which are endemic).