Situated primarily in southeastern Venezuela, the Guayanan Highlands moist forest ecoregion is distinct from other ecoregions in Amazonia due to its montane physiography. It hosts vast expanses of tall primary rain forest and open, treeless savannas interrupted by gallery forests. 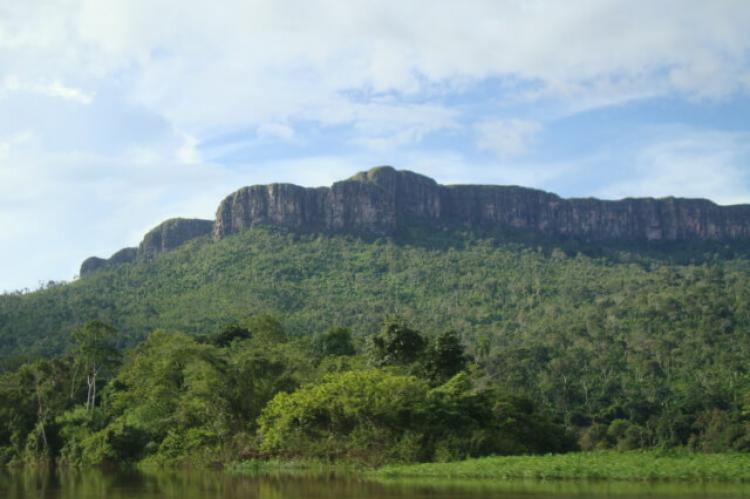 The Guayanan Highlands moist forest ecoregion is distinct from other ecoregions in Amazonia due to its montane physiography. It hosts vast expanses of tall primary rain forest and open, treeless or nearly treeless savannas interrupted by gallery forests.

Portions of the Guayanan Highlands moist forest ecoregion lie in the northernmost tip of Brazil, with small slivers in western Guayana and eastern Colombia.

Most of this ecoregion lies within the eastern portion of the Orinoco Basin which drains into the Caribbean Sea from Venezuela. Another portion drains into the Amazon Basin.

The major rivers entering the Orinoco Basin from this ecoregion are the Orinoco headwaters, the Ventuari, Caroní, Paragua, and Caura in Venezuela. In the southern potions, the Rio Uraricuera and Rio Branco (in Brazil) drain into the Amazon.

The Guayanan Highlands moist forest ecoregion sits upon the Guiana Shield which underlies the northern region of South America. It consists of a rock basement with a variety of igneous and metamorphic rocks formed during different geological events.

The upland terraces and mountains of the Guiana Shield are remnants of highly weathered and ancient parent material consisting mostly of quartzitic or sandstone rocks, although granitic rock types persist in some areas.

The lowland plains emerged only recently from lacustrine and marine environments. The soils are generally sandy and poor in nutrients.

The seasonal climate is humid to sub-humid with 2,000 to 2,400 mm (78 to 95 in) of rainfall distributed evenly though the year. The average annual temperature is approximately 24° C.

Ambitious Plan to Save the Spectacular Migration of the Monarch Butterfly
Oct 2, 2020 - 19:59
END_OF_DOCUMENT_TOKEN_TO_BE_REPLACED