The Gulf of Darién is the southernmost extension of the Caribbean Sea. The Pan-American Highway is a network of roads, stretching from Prudhoe Bay, Alaska, to the lower reaches of South America. It is interrupted between Panama and Colombia by the Darién Gap.

The port city of Turbo, Colombia is located on its southeastern shores and the Atrato River, which flows north through Colombia, forms a large swampy delta in the extreme south. 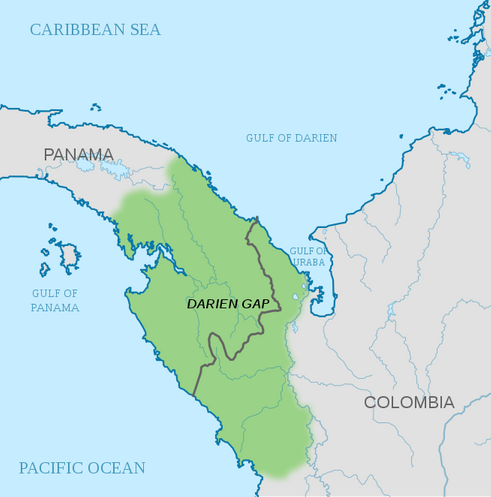 The Darién Gap is a break across the North and South American continents within Central America, consisting of a large watershed, forest and mountains in the northern portion of Colombia's Chocó Department and Panama's Darién Province.

The geography of the Darién Gap on the Colombian side is dominated primarily by the river delta of the Atrato River, which creates a flat marshland at least 80 km (50 mi) wide. The Serranía del Baudó range extends along Colombia's Pacific coast and into Panama.

The Panamanian side, in stark contrast, is a mountainous rain forest, with terrain reaching from 60 m (197 ft) in the valley floors to 1,845 m (6,053 ft) at the tallest peak (Cerro Tacarcuna, in the Serranía del Darién).

The Pan-American Highway is a roadway, or network of roads, stretching from Prudhoe Bay, Alaska, in North America to the lower reaches of South America. It links almost all of the Pacific coastal countries of the Americas in a connected highway system.

The Pan-American Highway is the world's longest "motorable road." However, because of the Darién Gap, it is not possible to cross between South America and Central America with conventional highway vehicles. Without a suitable all-terrain vehicle, the only way to safely navigate this stretch is by sea.

The Pan-American Highway is interrupted between Panama and Colombia by a 106 km (66 mi) stretch of marshland known as the Darién Gap. The highway terminates at Turbo, Colombia and Yaviza, Panama. Because of swamps, marshes and rivers, construction is prohibitive.

West and north of the Darién Gap, this roadway is also known as the Inter-American Highway through Central America and Mexico. There it splits into several spurs leading to the Mexico–United States border.

The Pan-American Highway passes through many diverse climates and ecological types – ranging from dense jungles to arid deserts and barren tundra. Some areas are fully passable only during the dry season and in many regions driving is occasionally hazardous. 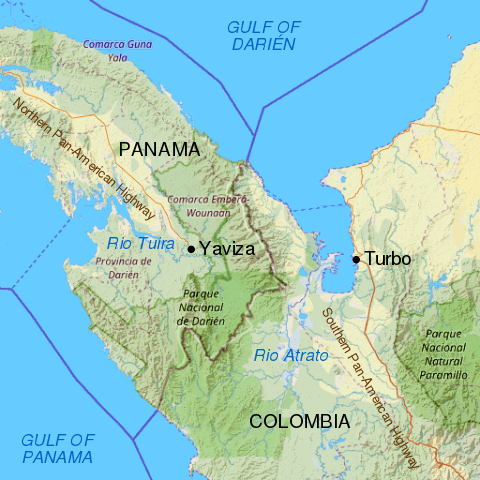 Map of the Darién Gap and the break in the Pan-American Highway between Yaviza, Panama and Turbo, Colombia