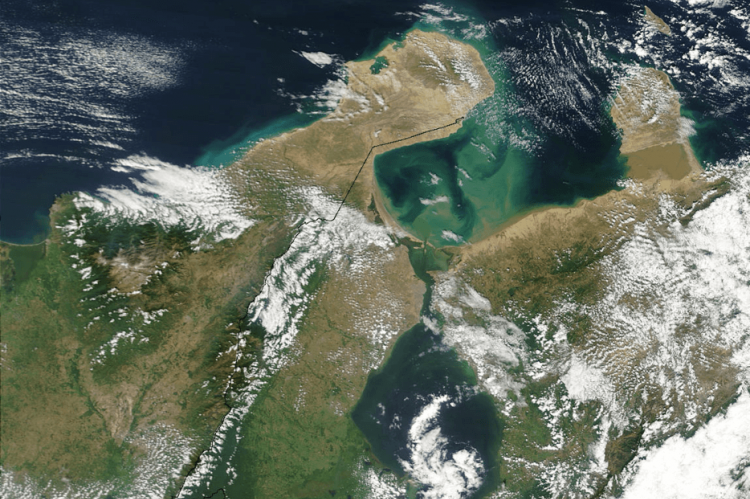 The Gulf of Venezuela is an inlet of the Caribbean Sea bounded by Venezuela and Colombia. The Gulf is located in the north of South America, between Paraguaná Peninsula of Falcón State to the east in Venezuela and Guajira Peninsula in Colombia to the west.

The gulf is surrounded by lowlands with little or no cultivation. It is a shipping route for the petroleum-producing Lake Maracaibo region. It is connected in the south to Lake Maracaibo through an artificial navigation canal.

Colombia and Venezuela have had a longstanding dispute over control of the gulf that has not been resolved, despite the decades-long negotiations conducted by a bilateral commission.

The Guajira Peninsula is located in northern Colombia and northwestern Venezuela. It is the northernmost peninsula in South America and has an area of 25,000 sq km (9,700 sq mi).

It is bounded by the Caribbean Sea to the north and west, the Gulf of Venezuela to the southeast, and the Sierra Nevada de Santa Marta and Sierra de Perijá to the south.

Much of the peninsula lies in northeastern Colombia; the rest is in northwestern Venezuela, where it is known as La Goajira Peninsula.

The region receives the flow of the trade winds from the northern hemisphere. The northeastern coast of Venezuela and the Antilles have Guajira-Barranquilla xeric scrub.

The trade winds cause a resurgence of the deep littoral waters and make the sea more rich in living species on the western side of the peninsula.

The northeastern flank of the Sierra Nevada de Santa Marta mountain range acts as a barrier that generates abundant rainfall in its steppes, forming the headwaters of the Ranchería River, the only major river in the area.

Climate and vegetation varies from south to north, presenting hyper-humid jungle weather in the southern part (with 3000 mm or 120 in of rainfall a year) to the desertic areas in the north (300 mm or 12 in a year).

The peninsula is inhabited mainly by members of the native tribe of the Wayuu, who use the plains to raise cattle, sheep, goats and horses. The descendants of Spanish colonists settled in the southeastern part of the peninsula (sometimes referred to as the Padilla Province).

This area has more fertile land due to the proximity to other river basins, such as the Cesar River basin. It has been developed for large plantations of cotton and sorghum, and for cattle ranching.

Lake Maracaibo is a large brackish tidal bay (or tidal estuary) and an inlet of the Caribbean Sea, lying in the Maracaibo Basin of northwestern Venezuela. It is connected to the Gulf of Venezuela by Tablazo Strait. It is sometimes considered a lake rather than a bay or lagoon.

Lake Maracaibo is fed by numerous rivers, the largest being the Catatumbo. The water in the southern portion of the lake is fresh but a stronger tidal influence makes the northern waters somewhat brackish. The lake is quite shallow except toward the south and it is surrounded by swampy lowlands.

The lake is one of the world’s richest and most centrally located petroleum-producing regions. The lake acts as a major shipping route to the ports of Maracaibo and Cabimas.