Huacachina is a village built around a small desert lagoon. This natural oasis is surrounded by sand dunes in what is often referred to as the "Ica Desert." The city of Ica lies along the desert coast of southern Peru. Ica, as well as Huacachina, is famous for its Pisco (brandy). 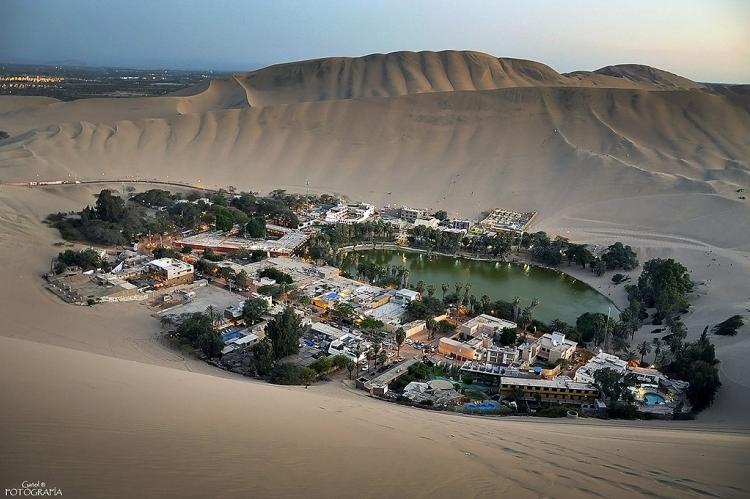 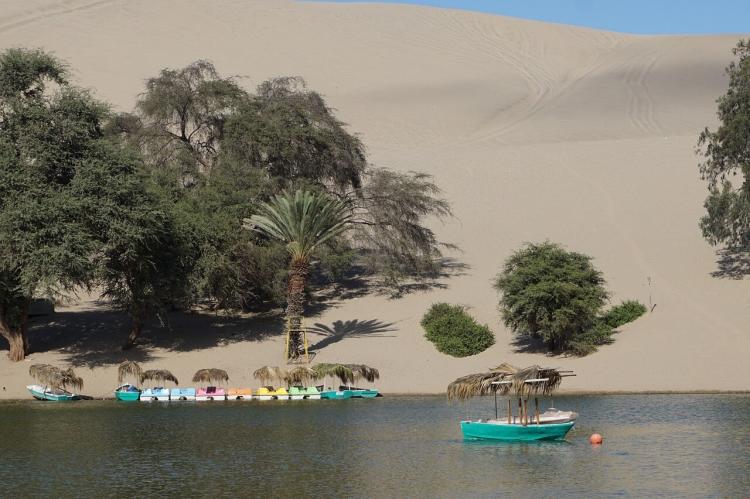 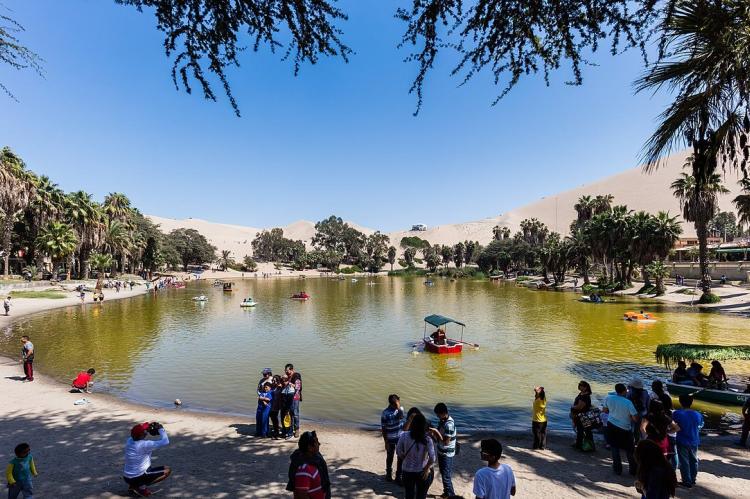 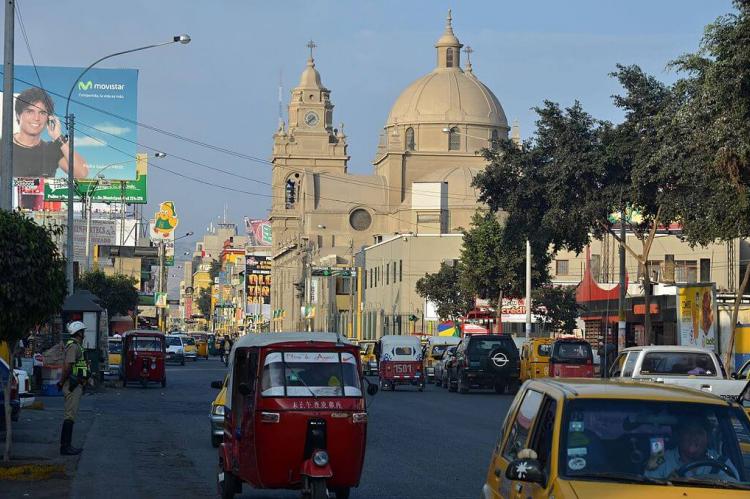 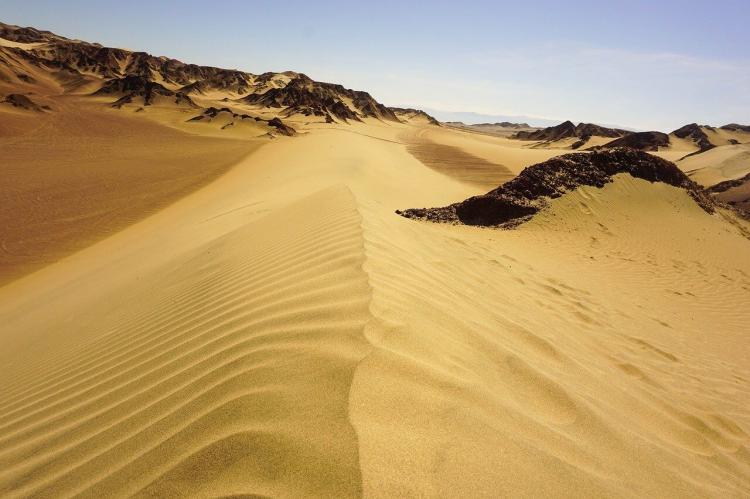 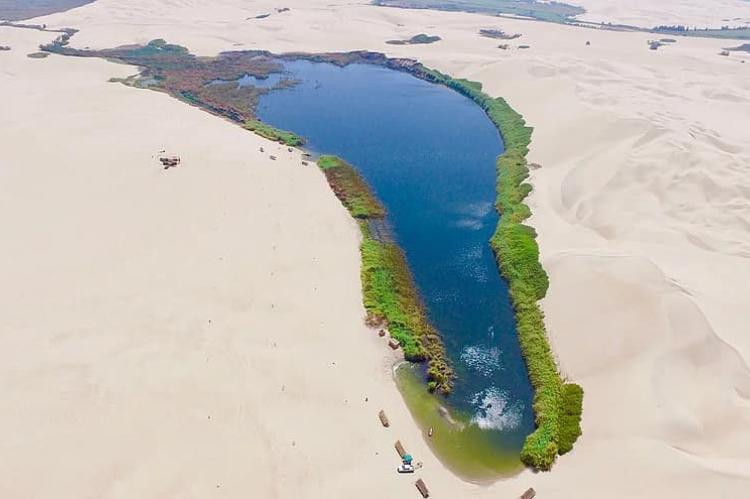 Huacachina is a village built around a small desert lagoon. This natural oasis is surrounded by sand dunes, in what is often referred to as the "Ica Desert," in southwestern Peru.

The tiny town lies approximately 300 km (186 mi) south of Lima and about 5 km (3 mi) from the regional capital of Ica, on the northern border of the Atacama Desert.

According to local legends, the water and mud of the lagoon is therapeutic. Both locals and tourists often bathe in the waters, or cover themselves with the mud, in an attempt to cure ailments such as arthritis, rheumatism, asthma and bronchitis.

The town of Huacachina began in the 1940's when Peru’s financial elite built holiday homes to take advantage of the lagoon's supposed healing properties. It fell out of favor in the 1950's but saw a revival in the 1990's as entrepreneurial locals took advantage of its tourism potential.

Huacachina today, has a population of around 100 permanent inhabitants but it hosts thousands of tourists each year. An antique image of the town is featured on Peru's 50 soles bill. Most of the village buildings are reminiscent of an earlier Peru but they now have become cafes, hostels and restaurants.

The lake was created by natural seepage from the underground aquifers but the increase in well-drilling started to threaten that supply in the early 2000's. To compensate for this loss and to preserve the oasis as a destination for tourists, local business groups began pumping water into the lake in 2015.

This small lake is filled with life, from its palm and carob trees to the birds that find refuge on its water, its fish, and the elusive creatures that inhabit the surrounding sand dunes. Its rich biodiversity is now protected by the Regional Conservation Area established to include Huacachina and the surrounding subtropical desert.

Ica is the capital of the Department of Ica in southern Peru. While the area was long inhabited by varying cultures of indigenous peoples, the Spanish conquistador Jerónimo Luis de Cabrera claimed its founding in 1563.

The city is located approximately 300 km (186 miles) south of Lima. Further south along the Pan-American Highway lies the city of Nazca. Ica's population (as of the 2017 census) is over 280,000.

Ica lies within a wide expanse of high plains that border the Andean foothills to the east. A town (originally called Valverde), established nearby in 1563, was moved to the present site of Ica after being destroyed by an earthquake in 1569. It was officially renamed San Jerónimo de Ica in 1640.

The city is the site of the Museo Regional de Ica, a regional museum with exhibits ranging from prehistoric artifacts to the Spanish colonial era.

The city of Ica lies about 48 km (30 mi) from the Pacific Ocean, along the desert coast of southern Peru. This extremely arid and intensively irrigated coastal valley of the Ica River is located in what is often referred to as the "Ica Desert."

Ica, as well as the town of Huacachina, are famous for Pisco (both a brandy and a cocktail) and the associated grape vineyards. Pisco is the national drink of Peru and Ica is often called the home of Pisco. The region has long been known for the cultivation and processing of cotton and grapes.