The Lesser Antilles mangrove ecoregion is comprised of a chain of islands at the southeastern edge of the Caribbean Sea from Anguilla in the north to Grenada in the south. The largest areas of mangrove are found on Antigua and Barbuda, Guadeloupe, Martinique and the USVI. 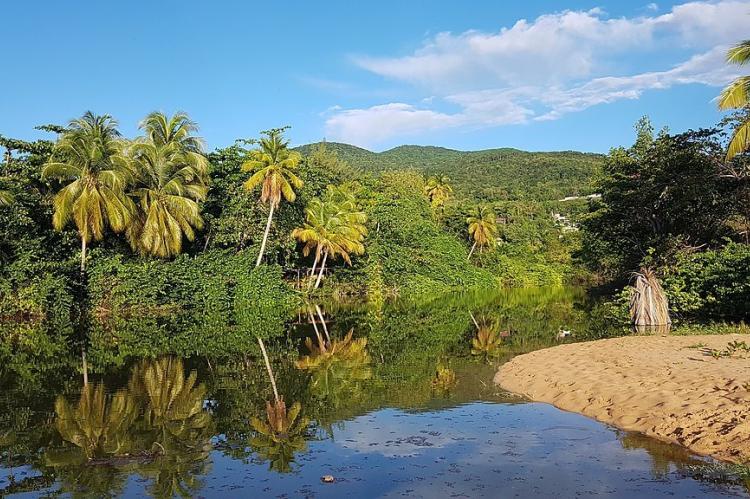 The Lesser Antilles mangrove ecoregion is comprised of a chain of islands at the southeastern edge of the Caribbean Sea from Sombrero and Anguilla in the north, to Grenada in the south.

An inner arc is of more recent volcanic origin and of higher elevation up to 1397 on Martinique, while the outer arc consists of limestone on top of an eroded igneous rock layer, where elevation is much lower.

The small islands of the Lesser Antilles have less species diversity than the larger islands of the Greater Antilles but nonetheless have high levels of endemism. They also have a great diversity of habitats associated with environmental conditions related to differences in climate, elevation, rainfall, and salinity found in the different islands.

The total area of mangrove cover on the Lesser Antilles is estimated at 20,636 ha (51,000 acres), which is distributed among 263 different sites. The largest areas of mangrove are found on Antigua and Barbuda, Guadeloupe, Martinique and the U.S. Virgin Islands.

There are a total of approximately 29 protected areas among all the islands, 15 of which are found on St. Lucia.

Ten different types of mangrove communities have been identified, depending on the dominant mangrove species and whether they occur in estuarine areas, as fringe on an open coast, in depressions or basins, or as scrub vegetation.

The Lesser Antilles mangroves are also found in association with other types of habitats as part of broader coastal wetland systems, with conditions that range from freshwater and brackish to hypersaline, and associated with marshes, swamp forest, littoral woodland, and dunes, and influenced by both land drainage and tidal flushing.

Overall biodiversity is higher on the larger islands in the southern part of the chain, but endemism is greater in the northern islands that are more isolated from the mainland.

Mammals such as West Indian manatee (Trichecus manatus) utilize mangroves. The calving grounds of the humpback whales (Megaptera novaeangliae) are in the Grenadines and between Antigua and Anguilla.