The Orinoco wetlands ecoregion is located in northeastern Venezuela, within the northern Orinoco Delta. The ecoregion consists of several large and small patches of flooded grasslands, which occur in a habitat mosaic with swamp forests and mangroves. 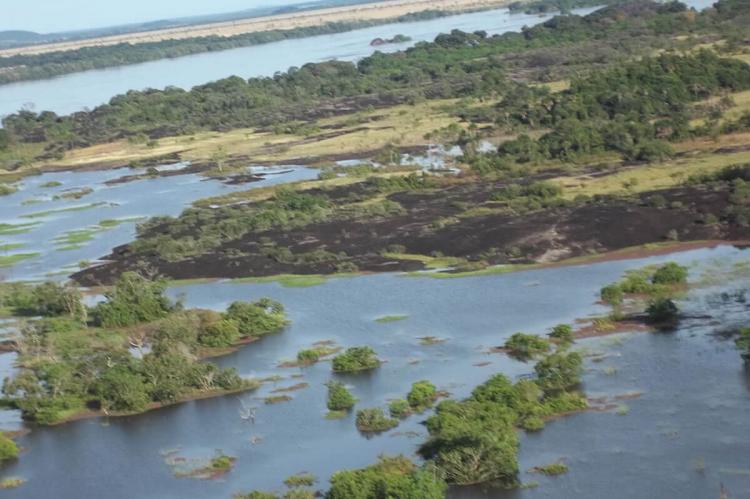 The Orinoco wetlands ecoregion is located in northeastern Venezuela, within the northern Orinoco Delta. The delta has been formed by the sediment deposited by the Orinoco River through thousands of years.

The ecoregion consists of several large and small patches of flooded grasslands, which occur in a habitat mosaic with swamp forests and mangroves.

The Orinoco wetlands are flooded grassland occurring in seven distinct patches, which are embedded in a mosaic of mangroves, swamp forest, moist forest and llanos.

The blocks of flooded grassland occur north of the main flow of the Orinoco River, along the Boca Grande and San Juan Rivers, and within the alluvial fan of the Orinoco (Amacuro) delta.

The core portion of the Orinoco wetlands ecoregion occurs near Tucupita, along the Manamo River, which diverges from the Orinoco near Barrancas to form the western edge of the delta. The next largest patch occurs along the Canal Macarao. Others patches occur along the coast, between the mangrove and swamp forests.

The Orinoco wetlands are both globally important and a critical habitat to a number of endangered species. Despite its importance, relatively little is know about the region.

Threats to the area are increasing as water diversion and damming, oil drilling, and human populations increase. The Delta del Orinoco Biosphere Reserve is the largest protected area within the delta region.

Floodplains of large rivers, such as the Orinoco, are among the most productive ecosystems. Very little research has been conducted in the wetlands of the Orinoco Delta (Delta Amacuro) and species compositions are doubtlessly influenced by the surrounding terra firma moist forests, swamp forests and mangroves.

Climate in this region is tropical and wet. Precipitation varies throughout the region and fluctuates between 1,000 and 2,000 mm annually. Rainfall is irregular and the wet season begins in April/May and usually last through December with a brief pause in July.

The terrain is flat, mostly about 1 m (3 ft 3 in) above sea level but rising to 9 m (30 ft) in levees along the coast. Soils are almost all alluvial deposits, carried from the Andes Mountains far to the west. The 360 km (220 mi) coastline of the delta moves east into the Atlantic Ocean by about 40 m (130 ft) annually.

The delta region has many large and small distributary rivers and streams, permanent wetlands and marshes, oxbow lakes, levees and alluvial plains. The region is sparsely inhabited apart from the small city of Tucupita on the edge of the region and small communities of Warao people along the rivers.

The patches of wetlands are scattered through a landscape of swamp forests, mangroves, and llanos. Their central sections hold tropical tall flooded grasslands that contain very few shrubs or trees.

There are patches of palms among the grasses that include açaí palm (Euterpe oleracea), Manicaria saccifera, Attalea cuatrecasana and species of the Attalea and Trithrinax genera. In some areas there are stands of Mauritia flexuosa.

Around the fringes, the habitat holds plants from the surrounding mangroves, swamp forest and lowland forest. The grasslands are drier in the west and hold evergreen broadleaf trees.

The monodominant stands of morichi palm (Mauritia flexosa) provide important food to a great number of species, including numerous primates, parrots, and rodents, and also provides nesting habitat for many bird species.