Stretching across Brazil, Bolivia and Paraguay, the Pantanal is a natural region encompassing the world's largest tropical wetland area. Although not as well known as the Amazon Rainforest to its north, this gigantic seasonal floodplain is also home to a staggering variety of plants and wildlife. 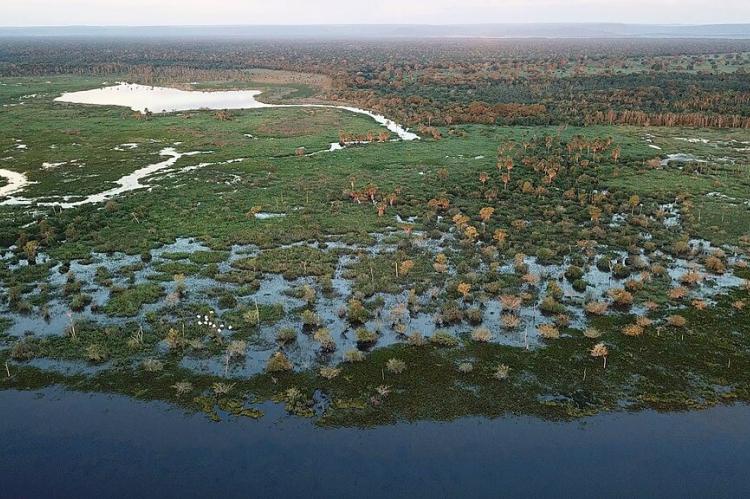 The Pantanal is a natural region stretching across Brazil, Bolivia and Paraguay, encompassing the world's largest tropical wetland area. Although not as well known as the Amazon Rainforest to its north, this gigantic seasonal floodplain is also home to a staggering variety of plants and wildlife.

The Pantanal region sprawls over an area estimated at between 140,000 and 195,000 sq km (54,000 and 75,000 sq mi). It is located mostly within the Brazilian state of Mato Grosso do Sul, but it extends into Mato Grosso and portions of Bolivia and Paraguay.

UNESCO recognizes the Pantanal Conservation Area as a World Heritage site which comprises a cluster of four contiguous protected areas: the Pantanal Matogrossense National Park and the Special Reserves of Acurizal, Penha and Doroche.

A portion of the Pantanal in Brazil has been protected as the Pantanal Matogrossense National Park. In addition, the Pantanal Biosphere Reserve comprises the States of Mato Grosso, Matto Grosso do Sul and a small portion of Goiás State.

The Cerrado savannas lie to the north, east and southeast. Various subregional ecosystems exist, each with distinct hydrological, geological and ecological characteristics; up to 12 of them have been defined.

The Pantanal is a huge, gently-sloped basin that receives runoff from the upland areas (the Planalto highlands) and slowly releases the water through the Paraguay River and tributaries.

Each year torrential rains fill the Pantanal’s giant basin, creating a vast flooded landscape. When the downpour subsides, water slowly drains into the Paraguay River, leaving behind fish- and snail-filled pools that attract huge flocks of egrets, storks, and spoonbills.

Roughly 80% of the Pantanal floodplains are submerged during the rainy seasons, nurturing a biologically diverse collection of aquatic plants and helping to support a dense array of animal species. This pristine landscape is brimming with the greatest concentration of wildlife in South America.

The natural region includes essential sanctuaries for migratory birds, critical nursery grounds for aquatic life, and refuges for such creatures as the yacare caiman, deer, and Pantanal jaguar.

The Pantanal ecosystem is thought to be home to 1000 bird species, 400 fish species, 300 mammalian species, 480 reptile species and over 9000 subspecies of invertebrates.

Among the rarest animals to inhabit these wetlands are the marsh deer (Blastocerus dichotomus) and the giant river otter (Pteroneura brasiliensis).

Parts of the Pantanal are also home to the following endangered or threatened species: the hyacinth macaw (Anodorhyncus hyacinthinus) (a bird endangered due to smuggling), the crowned solitary eagle, the maned wolf (Chrysocyon brachyurus), the bush dog (Speothos venaticus), the South American tapir (Tapirus terrestris) and the giant anteater (Myrmecophaga tridactyla).

Common species include the capybara (Hydrochoerus hydrochaeris), Ocelot (Leopardus pardalis) and the yacare caiman (Caiman yacare). According to 1996 data, there were 10 million caimans in the Pantanal, making it the highest concentration of crocodilians in the World.

The Pantanal is home to one of the largest and healthiest jaguar (Panthera onca) populations on Earth.

In addition to the caiman, some of the reptiles that inhabit this region are the yellow anaconda (Eunectes notaeus), the gold tegu (Tupinambis teguixin), the red-footed tortoise (Geochelone carbonaria) and the green iguana (Iguana iguana).