The Ría Lagartos Biosphere Reserve features a variety of mangroves, small estuaries, coastal lagoons, marshes and savannah. Located at the eastern end of the Yucatán Peninsula, it is home to a variety of species, a substantial number of which are rare, vulnerable and endangered. 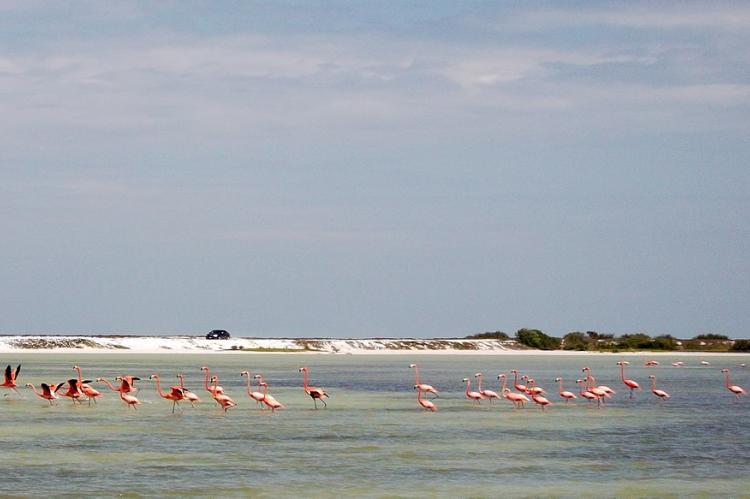 The Ría Lagartos Biosphere Reserve encompasses fundamental wetlands recognized by the Ramsar Convention, located in the eastern end of the Yucatán Peninsula in Mexico.

The Ría Lagartos Biosphere Reserve features a presents a rich diversity of landscapes and ecosystems:

The savanna ecosystem is represented by tular vegetation, grasslands and reed beds that are the main nesting sites for marshland and sea birds.

The area is fundamental for the conservation of a number of species. In the past decade, the Biosphere Reserve has managed to stabilize the number of various endangered species.

It is also an important resting place for migrating birds, like the black-necked stilt (Himantopus mexicanus), who spends the winters in the region.

In recent years, the vegetation here has been strongly affected by human activities, particularly by agriculture and livestock raising practices that cause the destruction of vast surfaces of vegetation. It has also been affected by natural catastrophes like the hurricanes that regularly hit this region and the subsequent forest fires.

The area has long been an ecotourism destination, particularly related to the population of Caribbean flamingos and sea turtle nesting. The last decade has seen a 300% increase in tourism services, including hotels, restaurants as well as handicraft production.

On the other hand, it has traditional fishing and salt mining activities, which have been gradually adjusting to sustainable practices. It also has very limited agricultural activities, in which a pre-Hispanic technique called 'milpa', consisting of slash and burn, is still present. The 'milpas' produce mostly corn, beans, pumpkins and peppers.