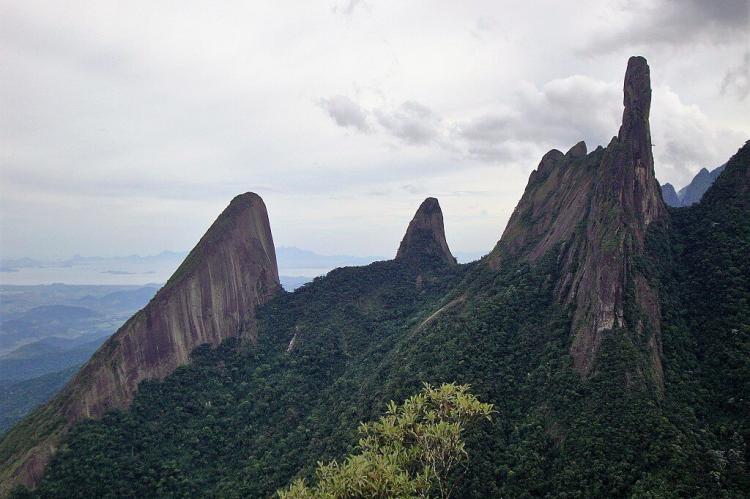 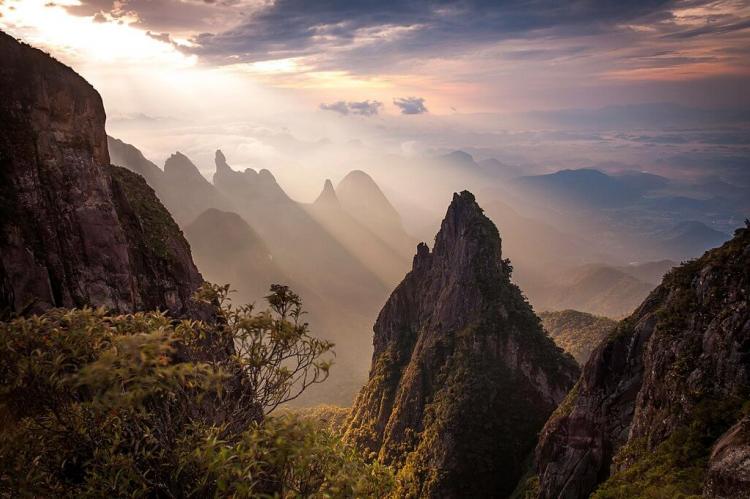 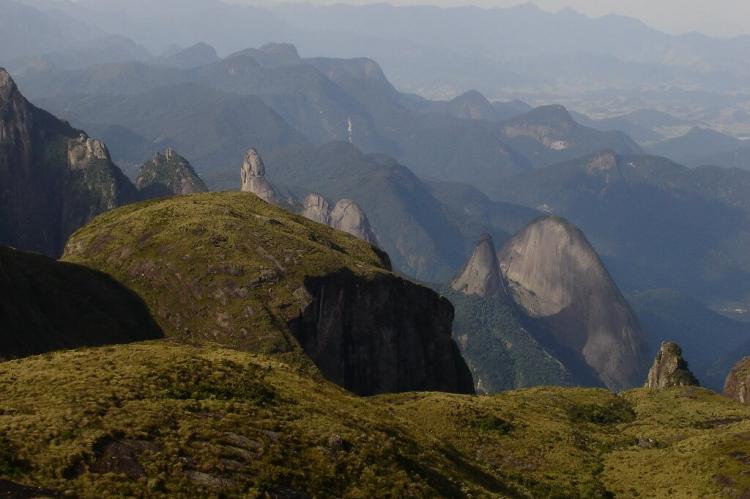 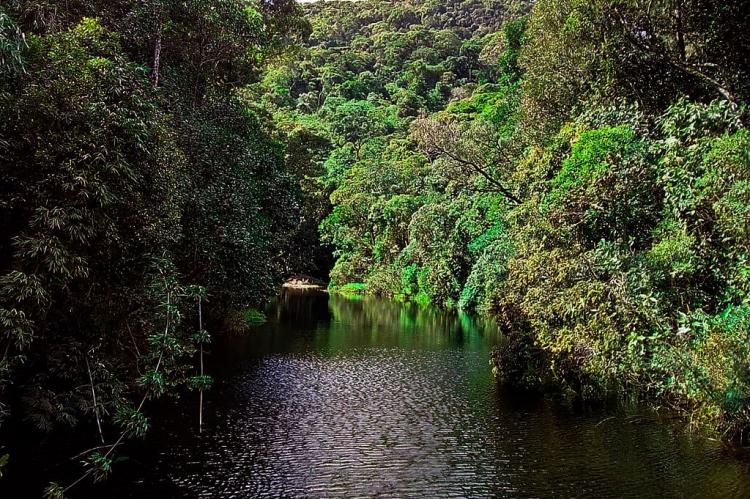 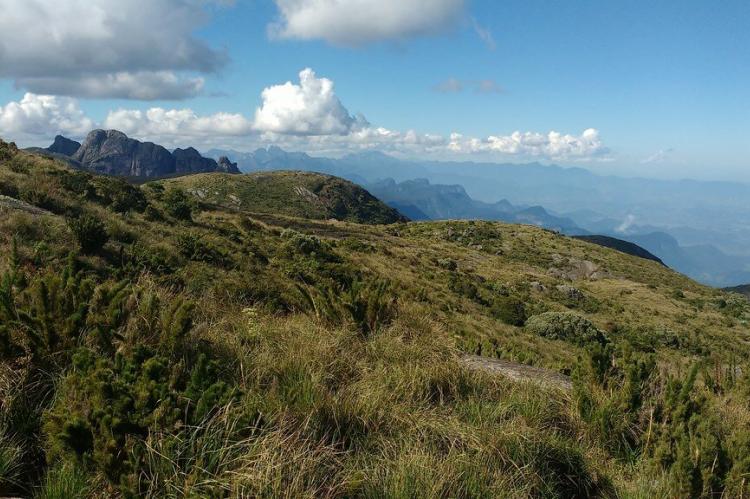 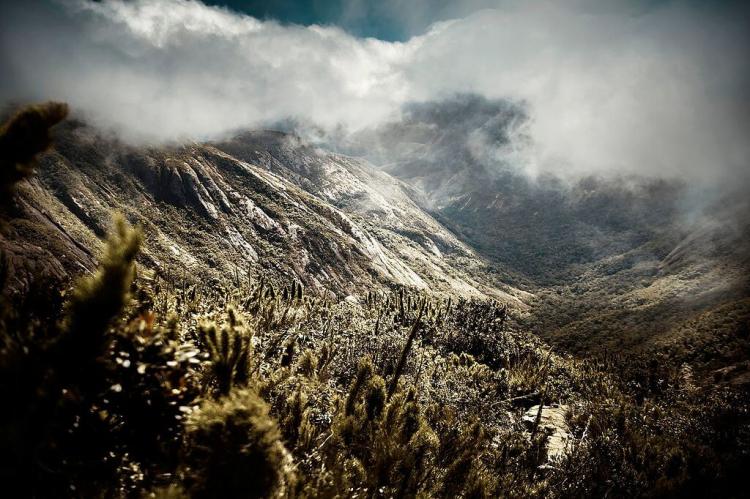 The Serra dos Órgãos ("Organ Range") is a mountain range in the state of Rio de Janeiro that is part of the larger Serra do Mar system of mountain ranges. The range overlooks Guanabara Bay in southeastern Brazil.

The origin of the unusual name is credited to early Portuguese settlers who thought the ensemble of the hilltops resembled the organ pipes in European cathedrals.

Covering an area of approximately 20,000 ha (49,400 acres), the range is an escarpment on the northern edge of the Guanabara Graben (valley or depression) between the cities of Petrópolis and Teresópolis.

The Dedo de Deus (God's Finger) and Escalavrado, along with the nearby peaks with steep rock walls, are dramatic features that can be seen on a clear day from Rio de Janeiro, which is 50 km (31 mi) away.

The mountains consist of granitic gneisses of the Neoproterozoic era. The region is structurally complex with considerable faulting combined with erosion.

The ridge containing the God's Finger and other towers is unusual in being sustained by a thick dike of Cambrian granite that is more resistant to erosion than the surrounding Neoproterozoic orthogneisses. The formation of the rocks may have occurred around 620 million years ago.

Serra dos Órgãos National Park is located in the state of Rio de Janeiro, Brazil. It protects the Serra dos Órgãos mountain range and the water sources in the range. It was created in 1939 as the third national park in Brazil and it was intended to protect the headwater of the rivers that flow in the Fluminense basin along with the unique mountains.

One of the most famous formations in the park is the Dedo de Deus (God's Finger) peak, which resembles a left hand with its index finger pointing towards the sky. It is 1,692 m (5,551 ft) high and can be seen in the background of the state flag of Rio de Janeiro.

Serra dos Órgãos National Park has a tropical (80% to 90% relative humidity) climate caused by moist air from the Atlantic most of the year. Average temperatures range from 13 to 23 °C (55 to 73 °F) but may reach 38 °C (100 °F) and may fall below freezing in the highest parts.

The average rainfall is 1,700 to 3,600 mm (67 to 142 in), with more rain in the summer (December to March) and a dry season in the winter from June to August. The southeast side facing the ocean receives more rain than the northwest side.

Serra dos Órgãos National Park is in the Atlantic Forest biome and due to the high rainfall, it contains rich vegetation, much of it unique to this biome. More than 2,800 species of plant have been recorded including 360 species of orchids and over 100 species of bromeliads.

There are various endemic species. Above 2,000 m (6,600 ft) the vegetation is high montane, with open fields and small woody shrubs. At least 347 species have been found in this environment of which 66 are endemic to this ecosystem.

The park is one of the few natural habitats of species of Schlumbergera which were developed into the colorful "Thanksgiving Cactus" and "Christmas Cactus", widely grown as house plants. 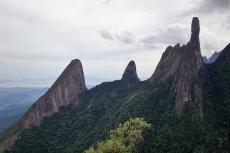 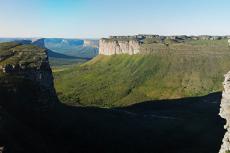