The Sierras Pampeanas (also called Central Sierras) is a geographical region and chain of mountains that rise sharply from the surrounding Pampas region of northwestern Argentina. They run parallel to the Andes, cross into seven Argentine provinces, and may be cataloged into sub-regions. 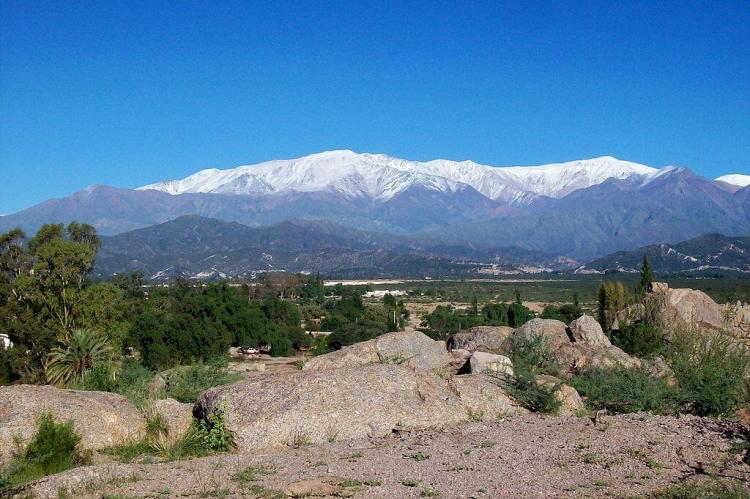 The Sierras Pampeanas (also called Central Sierras) is a geographical region and chain of mountains that rise sharply from the surrounding Pampas region of northwestern Argentina.

The Sierras Pampeanas region may be cataloged into sub-regions:

The highest point of the Sierras Pampeanas is Cerro General Belgrano (6,250 m or 20,500 ft above sea level) in La Rioja, in the Famatina area.

Between the high points are several salt-filled depressions. The Salinas Grandes depression is located in Cordoba, La Rioja, Catamarca and Santiago del Estero.

A characteristic of many of these mountain ranges is their morphological asymmetry: the western slopes are usually steeper than the eastern slopes, thus the former are sometimes called coasts and the latter are called skirts.

Due to erosion and other geologic forces (volcanoes, glaciers, rivers, tectonic etc.), the surface of this area varies widely. It includes cliffs and narrow channels of some rivers; there are abundant caves, grottos and overhangs.

Some mountains are separated by significant open areas (too large to be considered a "valley"); these are called "barreales" (mud-flats) or "pampas" (grassy plains).

This region has a temperate and semi-arid climate, with warm summers and cool winters. The northern east slope is covered by rain forest, due to high humidity in this subtropical zone.

The portions within Córdoba and San Luis enjoy Mediterranean-type climate, with intense summer rainstorms and snowy winters; the vegetation here includes conifer trees. More precipitation falls on the eastern slopes which meet the moist winds from the Atlantic Ocean.

Groundwater is not abundant in most of this area; the eastern slopes show greater population due to the greater runoff water available there. There are short, torrential rivers and many streams and rivulets that carry low flows, with brief and violent floods caused by summer rains. These rivers are used for the production of hydro power.

In the more arid regions (the west faces) grow giant or medium cactus and various shrubs (chilca, tola, etc.) As more rainfall is available, the vegetation is dense with trees such as conifers, alder, deciduous trees including walnut, jacaranda, pisonia, Schinus molle, quebracho, acacia, and flowering plants such as orchids, jasmine and bromeliads.

The Córdoba and San Luis areas have abundant vegetation on the eastern slopes, including carob, "coconuts" (local name of palm trees), garabato blanco (acacia) and willow.

The area boasts a diverse fauna, although several species are moving toward extinction (such as the boa). Among the native animals: puma, brocket deer (in the north), wildcat, fox, armadillo and mule deer; rodents such as the viscacha and guinea pig.

The observed fauna varies according to the combination of three basic natural factors: the arrangement of mountain ranges, altitude and climate.

There are important variances of biome in the Pampas Sierras: semi-arid areas, rain-forest areas, and moderately fertile areas covered with natural forests (especially in Córdoba and San Luis).

In the arid zone of La Rioja and Catamarca are found vicuña and some alpaca. Earlier in the twentieth century jaguar were found in the rain forests. In the eighteenth century there were sightings of spectacled bears.

The avifauna is diverse and relatively abundant in the higher, mostly arid areas. It includes condors and vultures. In the fertile plains of Tucumán previously were found rhea, turkey, parrot, hummingbird, woodpecker and pigeons.