The Southwest Amazon moist forests cover an extensive area of the Upper Amazon Basin. The inaccessibility of this region has kept most of the habitat intact. Also, there are a number of protected areas, which preserve this extremely biologically rich ecoregion. 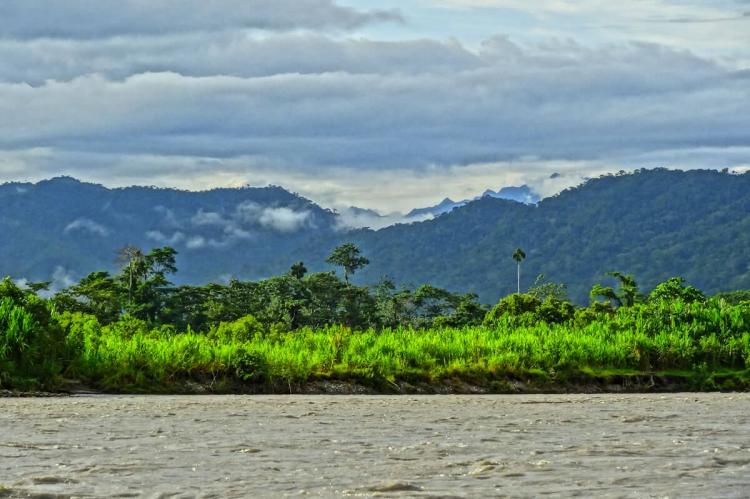 The Southwest Amazon moist forests ecoregion is located in the Upper Amazon basin, characterized by a relatively flat landscape with alluvial plains dissected by undulating hills or high terraces.

The inaccessibility of this region, along with few roads, has kept most of the habitat intact. Also, there are a number of protected areas, which preserve this extremely biologically rich ecoregion.

The region is bisected north to south between Peru and Brazil by the small mountain range Serra do Divisor. Elevations range from 300 m (980 ft) in the west to 100 m (330 ft) on the eastern edge of the region.

Because the Southwest Amazon moist forests ecoregion covers such a vast area, there are climatic, edaphic and floristic differences within it. Generally, the wetter and less seasonal northern forests (3,000 mm (120 in) of rain annually) share only 44 percent of the tree species with forests in the slightly drier, more seasonal southern region. This region receives from 1,500 to 2,100 mm (59 to 83 in) of rain annually. Temperatures over the year range from 22 to 27 °C (72 to 81 °F).

Distinctive about this region is the diversity of habitats created by edaphic, topographic and climatic variability. Habitat heterogeneity, along with a complex geological and climatic history has led to a high cumulative biotic richness. Many widespread Amazonian mammals and reptiles find a home in this region.

Much of the natural habitat of the Southwest Amazon moist forest region remains intact, protected by sheer inaccessibility. Manú National Park, a World Heritage Site, protects pristine lowland forest in southern Peru, a large part of which falls into this ecoregion.

The nearby Tambopata National Reserve protects seven major forest types. This reserve offers refuge to game species that have been over-hunted in other areas such as tapirs, spider monkeys, jaguars, capybaras, white-lipped peccaries, monkeys, caimans and river turtles.

The Manuripi Heath National Reserve is located in the southernmost area of this region in Bolivia covering 18,900 sq km (7,300 sq mi) of dense tropical forest.