The Tehuacán-Cuicatlán Valley is a semi-arid zone with the richest biodiversity in North America, hosting the densest forests of columnar cacti in the world. Archaeological evidence demonstrates the early domestication of crops and an exceptional water management system of canals, wells, aqueducts and dams. 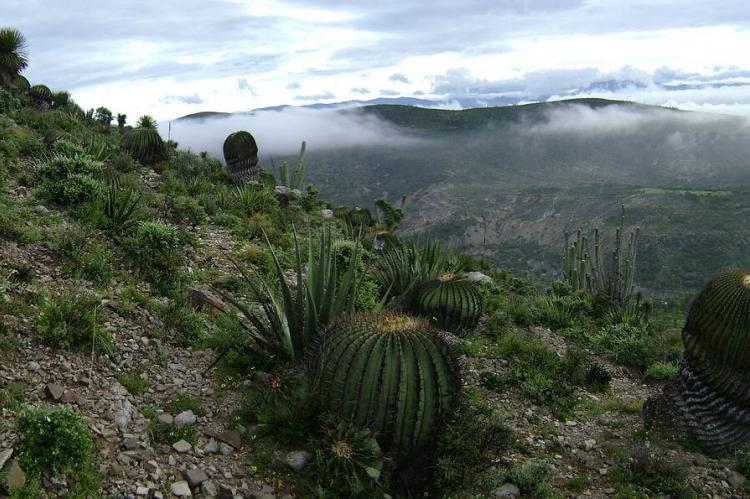 The "Tehuacán-Cuicatlán: originary habitat of Mesoamerica" is located in central southern Mexico, in the southeast of the State of Puebla and the north of the State of Oaxaca.

The entire property is located within the Tehuacán-Cuicatlán Biosphere Reserve.

The Tehuacán-Cuicatlán Valley, part of the Mesoamerican region, is located in an arid / semi-arid zone with the richest biodiversity in all of North America. The vast biodiversity of the Tehuacán-Cuicatlán Valley, combined with the desert environment, gave rise to one of the largest and best documented sequence of human adaptations that took place in the area for over 12,000 years.

Archaeological remains demonstrate technological developments and the early domestication of crops. The valley presents an exceptional water management system of canals, wells, aqueducts and dams – the oldest in the continent – which has allowed for the emergence of agricultural settlements.

Of the 36 plant communities, 15 different xeric shrublands are exclusive to the Tehuacán- Cuicatlán Valley. The valley includes representatives of a remarkable 70% of worldwide flora families and includes over 3,000 species of vascular plants of which 10% are endemic to the Valley.

It is also a global center of agrobiodiversity and diversification for numerous groups of plants, in which the cacti stand out, with 28 genera and 86 species of which 21 are endemic. The valley harbors the densest forests of columnar cacti in the world, shaping a unique landscape that also includes agaves, yuccas and oaks.

The property exhibits impressively high levels of faunal diversity, including very high levels of endemism among mammals, birds, amphibians and fish. It also hosts an unusually high number of threatened species with some 38 listed under the IUCN Red List of Threatened Species.

The property is one of the richest protected areas in Mexico in terms of terrestrial mammals (134 species registered, two of them endemic to the Valley).

The Tehuacán-Cuicatlán Valley is part of the Balsas Region and Interior Oaxaca Endemic Bird Area (EBA). There are 353 bird species recorded, of which nine are endemic to Mexico. The property has eight known roosting areas of the threatened Green Macaw including a breeding colony.