The Valongo Wharf Archaeological Site encompasses the entirety of Jornal do Comércio Square. It is in the former harbor area of Rio de Janeiro in which the old stone wharf was built for the landing of enslaved Africans reaching the South American continent from 1811 onward. 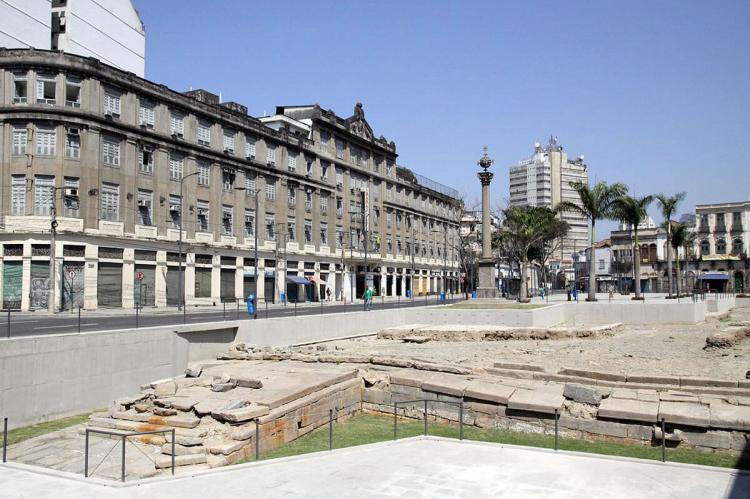 The Valongo Wharf Archaeological Site is located in central Rio de Janeiro and encompasses the entirety of Jornal do Comércio Square.

The Valongo Wharf is an old dock located in the port area of Rio de Janeiro, between the current Coelho e Castro and Sacadura Cabral streets. Built in 1811, it was the site of landing and trading of enslaved Africans until 1831, with the blockade of Africa banning the Atlantic slave trade to Brazil.

During the twenty years of its operation, between 500,000 and 1,000,000 slaves landed at Valongo. Brazil received approximately 4,900,000 slaves through the Atlantic trade.

In 1843, the wharf was renovated for the landing of Princess Teresa Cristina of Bourbon-Two Sicilies, who was to marry the emperor D. Pedro II. The wharf was then called Cais da Imperatriz (Empress Wharf).

Between 1850 and 1920, the area around the old pier became a space occupied by black slaves or freedmen of several nations - an area that Heitor dos Prazeres called Pequena África (Little Africa).

In physical terms, the property consists of several archaeological layers. The lowest of these with floor pavings in pé de moleque style represents the remains of the Valongo Wharf. Later, more dominant layers relate to the Empress' Wharf, constructed in 1843.

The property’s characteristic is that it is a beach that was covered with extensive paving made of hewn stones of different sizes, forms and functions, with a ramp and steps leading down to the sea. It was built in an apparently simple process, not on a landfill, as was customary but directly on the sand of the beach, following its natural contours.

In addition to the Wharf, the site includes remnants of the Pretos Novos Cemetery, part of the so-called Valongo Garden, built in a wide urban reform of Rio de Janeiro in the first decade of the 20th century as well as the Pedra do Sal, a symbolic location considered the birthplace of samba, a Brazilian music genre and rhythm of African origins.

Its surroundings include a set of port buildings currently undergoing renovation, most notably the building of the Former Dom Pedro II Docks.