The Yucatán Peninsula is the exposed portion of the larger Yucatán Platform and lies between the Gulf of Mexico and the Caribbean Sea. It includes the Mexican states of Campeche, Quintana Roo and Yucatán as well as parts of Belize and Guatemala. 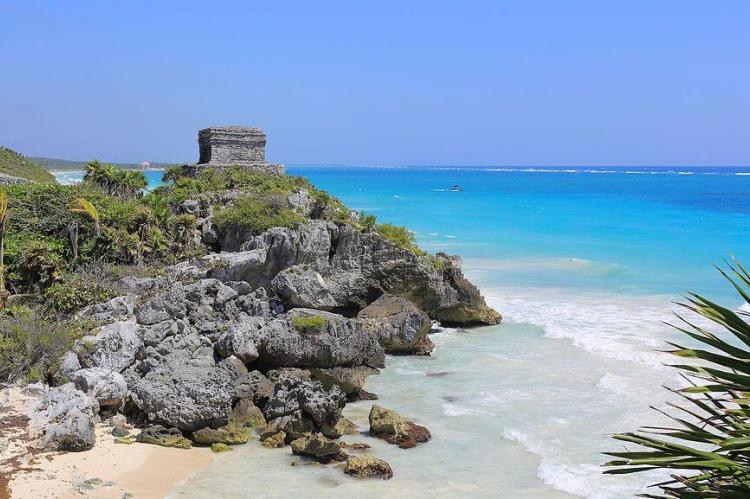 The Yucatán Peninsula lies between the Gulf of Mexico to the west and north, with the Caribbean Sea to the east. It encompasses approximately 197,600 sq km (76,300 sq mi).

The peninsula is approximately 320 km (200 mi) across and has a coastline of about 1,100 km (700 mi). It includes the Mexican states of Campeche, Quintana Roo and Yucatán; in the south, it includes large parts of Belize and Guatemala.

The low northern coast is sandy and semi-barren. The eastern coast consists of bluffs, indented with bays and bordered by several islands; the largest and most developed are Cozumel and Isla Mujeres. Many excellent beaches are found on the eastern coast, including Cancun, which has become a major resort area.

The peninsula is almost wholly composed of beds of coralline and porous limestone rocks, forming a low tableland that rises gradually toward the south. It is covered with a layer of thin, dry soil, formed through a slow weathering of the coral rocks. Where the rocky surface is perforated, there are natural sinkholes and caverns.

Due to the extreme karst nature of the whole peninsula, the northern half is devoid of rivers. Where lakes and swamps are present, the water is marshy and generally unpotable.

The thousands of sinkholes known as cenotes throughout the region provide access to the groundwater system. The cenotes have long been relied on by ancient and contemporary Maya people.

Many archaeological sites are found in the Yucatán, including Chichén Itzá and Uxmal (designated UNESCO World Heritage sites), as well as Tulum in Mexico.

Short and tall tropical jungles are the predominant natural vegetation types of the Yucatán Peninsula. The boundaries between northern Guatemala, Mexico, and western Belize are still occupied by the largest continuous tracts of tropical rain forest in Central America.

Like much of the Caribbean, the peninsula lies within the Atlantic Hurricane Belt, and with its almost uniformly flat terrain it is vulnerable to these large storms coming from the east. Strong storms called nortes can quickly descend on the Yucatán Peninsula any time of year. Although these storms pummel the area with heavy rains and high winds, they tend to be short-lived. 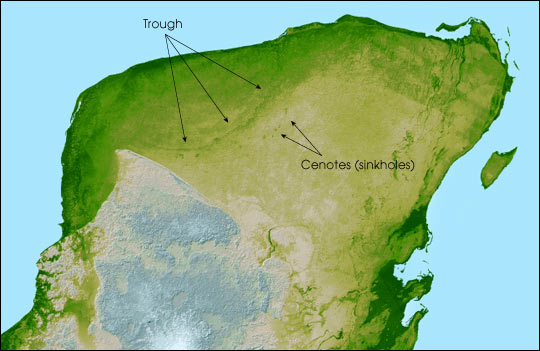 The majority of the population in the Yucatán consists of Maya and mestizos. Corn (maize), sugarcane, tobacco, cotton, coffee, and henequen (for sisal hemp) are cultivated throughout the peninsula. Oil has been discovered in several parts of the Yucatán.

It is believed that the mass extinction of the dinosaurs was caused by an asteroid impact in the Caribbean. Scientists have discovered the large Chicxulub Crater just off the coast of the Yucatan Peninsula and that, along with impact shocks shown on the Yucatan's rocks, is likely to be evidence showing where the asteroid hit.