The Serra do Mar coastal forests ecoregion covers a 1000-km long by 100-km wide strip along the Atlantic coast of southeastern Brazil. The ecoregion represents the largest continuous block of montane Atlantic forest and a remarkable center of endemism in South America. 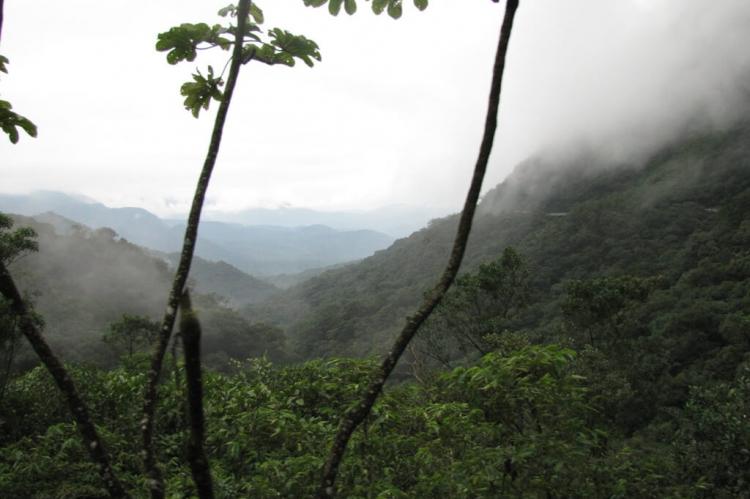 The Serra do Mar coastal forests ecoregion covers a 1000-km (620-mi) long by 100-km (62-mi) wide strip along the Atlantic coast of southeastern Brazil. It is an ecoregion of the tropical moist forests biome and of the South American Atlantic Forest biome.

The Serra do Mar coastal forests represent the largest continuous block of montane Atlantic forest and one of the more remarkable centers of endemism in South America.

The Serra do Mar mountain range defines this ecoregion with montane forests of Bromeliaceae, Myrtaceae, Melastomataceae and Lauraceae species.

This ecoregion contains outstanding biodiversity in endemism and species richness of flora, mammal, bird, and herpetofauna. More than half of the original forest has been altered; urban development and tourism constitute the main threats to this ecoregion.

The climate is subtropical with high levels of annual rainfall that ranges from 1,400 - 4,000 mm (55 - 157 in) without a dry period. Moisture-laden clouds from the Atlantic Ocean keep the forest wet year-round and most tree species are evergreen. Largely a lush, tropical rain forest, Serra do Mar is referred to as part of the Atlantic Forest or Mata Atlântica.

The Serra do Mar remains an eco-rich region containing numerous endemic (found nowhere else) species, many of which are threatened with extinction. In excess of half of the tree species and 92% of the amphibians are endemic to this forest.

Approximately 40% of Serra do Mar’s vascular plants and as many as 60% of its vertebrates are endemic to the forest. More than 140 threatened terrestrial species common to Brazil are found in the Atlantic Forest.

New species are continually found here; in fact, more than 1,000 new ﬂowering plants were discovered in the Serra do Mar between 1990 and 2006.

Among the local plants are ﬂowering Cassia (Cassia ﬁstula); Tibouchina — a genus of about 350 species of neotropical plants in the Melastomataceae family — orchids (Orchidaceae); a family of monocot ﬂowering plants called Bromeliaceae; many local varieties of the myrtle (Myrtaceae) family; and true laurel (Lauraceae).

The Serra do Mar forest is home to approximately 350 recorded bird species and it is an important breeding ground for harpy eagle (Harpia harpyja), red-tailed Amazon (Amazona brasiliensis) and black-fronted piping guan (Pipile jacutinga), among many others.

Many endemic species are so rare that their conservation status remains unknown, such as the oﬃcially data-deﬁcient Ihering's three-striped opossum (Monodelphis iheringi).

The primary ongoing threats to this ecoregion are urban development and tourism infrastructure. Seventy percent of the original forest has already been altered by settlement and agriculture and approximately one-half is currently in protected areas.