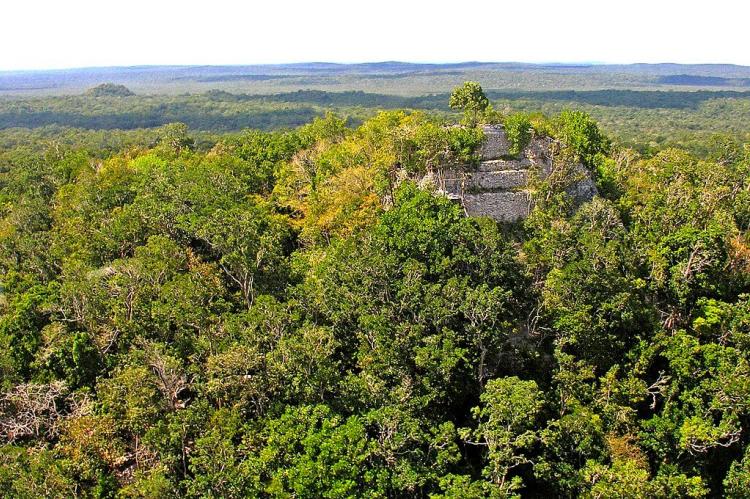 The Maya region is the largest in Mesoamerica. As such, it encompasses a vast and varied landscape within present-day Guatemala, Belize and Mexico, from the mountainous regions of the Sierra Madre to the semi-arid plains of northern Yucatán.

Geologically, the Maya region consists of a limestone plateau that rises slightly toward the south, ending where the mountainous zone interrupts the plain.

Climate in the Maya region can vary tremendously, as the low-lying areas are particularly susceptible to the hurricanes and tropical storms that frequent the Caribbean.

The southern Maya highlands include all elevated terrain in Guatemala and the Chiapas highlands. The Sierra Madre mountains are volcanic. Tajumulco Volcano, at an elevation of 4,220 m (13,845 ft), is the highest point in Central America.

The highlands of Guatemala have a total of 37 volcanoes, four of which are active: Pacaya, Santiaguito, Fuego and Tacaná. Earthquakes are frequent and flooding accompanied by mudslides can occur.

The southern (or central) Maya lowlands lie just north of the highlands. The area incorporates the Petén of northern Guatemala and Belize as well as the southern portions of the Mexican states of Campeche and Quintana Roo.

The southern lowlands receive much more rainfall than the highlands and contains tropical as well as sub-tropical climate zones.

The northern Maya lowlands cover the remainder of the Yucatán Peninsula, including the Puuc hills. With the exception of the Puuc hills, which range from central and southern Yucatán into the northern parts of Campeche, there is little topographic variation in the lowlands.

The climate of the northern Maya lowlands can vary greatly. The northwestern part of the peninsula is considered semi-arid and one of the driest in the Maya region, while the northeast receives a greater amount of rainfall.

There is an overall lack of surface water in the northern lowlands, though cenotes are common and provide a source of water. Generally, the water table (or aquifer) is not particularly deep and the excavation of wells is possible once the bedrock cap is pierced.