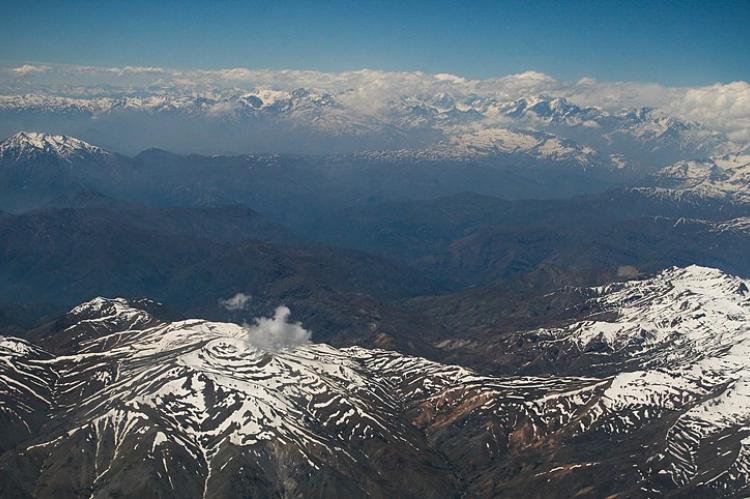 The Nazca Plate (or Nasca* Plate), named after the Nazca region of southern Peru, is an oceanic tectonic plate in the southeastern Pacific Ocean off the west coast of South America.

It is bounded on the west by the Pacific Plate and to the south by the Antarctic Plate through the East Pacific Rise and the Chile Rise respectively.

A triple junction, the Chile Triple Junction, occurs on the seafloor of the Pacific Ocean off Taitao and Tres Montes Peninsula at the southern coast of Chile. Here the three tectonic plates meet: the Nazca Plate, the South American Plate and the Antarctic Plate.

The Nazca Plate is being subducted beneath most of the west coast of South America at a rapid rate of 80 - 100 mm (3 - 4 in) per year. The ongoing subduction, along the Peru–Chile Trench, is largely responsible for the Andes Mountains and its movement over several hotspots has created some volcanic islands.

This active convergent margin is the longest subduction zone in the world, stretching some 7500 km. It produced the largest earthquake ever recorded on earth, the M 9.5 Great Chilean Earthquake (Valdivia Earthquake) on May 22, 1960.

Nazca is a relatively young plate both in terms of the age of its rocks and its existence as an independent plate having been formed from the breakup of the Farallon Plate about 23 million years ago. The oldest rocks of the plate are about 50 million years old.

The Galápagos hotspot is a volcanic hotspot responsible for the creation of the Galápagos Islands as well as three major aseismic ridge systems which are on two tectonic plates.

The Galapagos Rise is a divergent boundary located between the South American coast and the triple junction of the Nazca Plate, the Cocos Plate and the Pacific Plate.

The volcanically active Galapagos Islands exist on the Galápagos hotspot above the Galapagos Rise. The Galapagos Microplate is a small separate plate on the rise just to the southeast of the triple junction.

* "Nazca" and "Nasca" are commonly used interchangeably, but generally Nasca is used to refer to the period and culture that inhabited this area, while Nazca is used to describe the elements, such as the region, town and river.