The Atacama Desert is located in northern Chile between Argentina on the west and the Pacific Ocean on the east. Sparsely populated and containing considerable mineral resources, the Atacama Desert is one of the driest places in the world and one the top three tourist destinations in Chile. 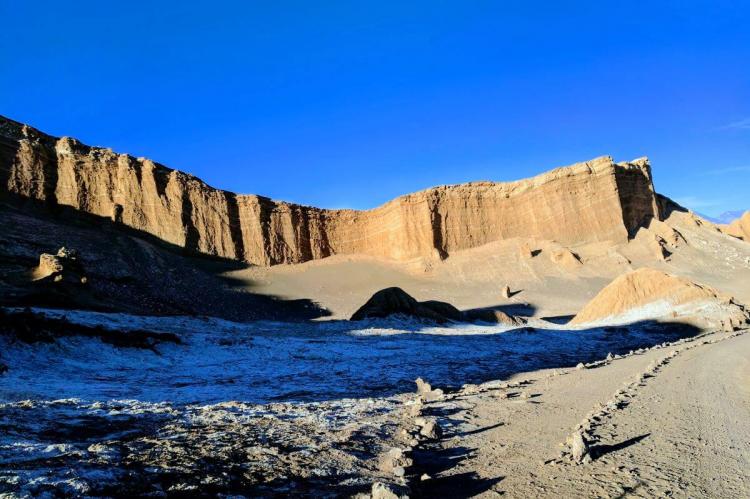 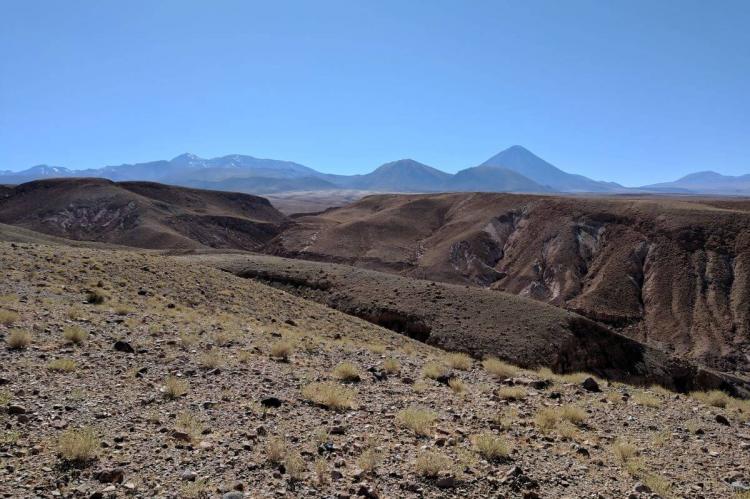 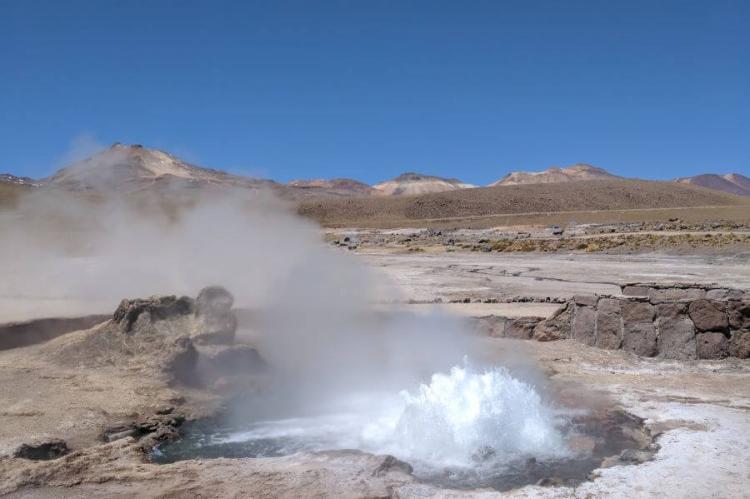 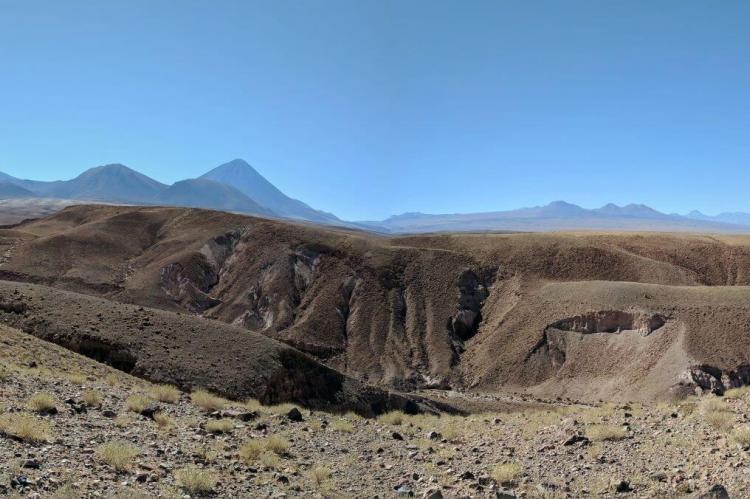 The original inhabitants of this area, the Diaguitas and Changos, valued its mineral wealth. The desert has rich deposits of copper and other minerals as well as the world's largest natural supply of sodium nitrate (Chile saltpeter), which was mined on a large scale until the early 1940's.

The Atacama border dispute over these resources between Chile and Bolivia began in the 19th century and resulted in the War of the Pacific. Since the 19th century, iron, copper, silver and gold have brought prosperity.

The desert is littered with about 170 abandoned nitrate (or "saltpeter") mining towns, almost all of which were shut down decades after the invention of synthetic nitrate in Germany in the first decade of the 20th century.

Most towns are, today, located along the Pacific coast. In interior areas, oases and some valleys have been populated for millennia and were the location of the most advanced pre-Columbian societies found in Chile.

The Chinchorro culture developed in the Atacama Desert area from 7,000 to 1,500 BCE. These peoples were sedentary fishermen inhabiting mostly coastal areas.

Before the Inca empire and prior to the arrival of the Spanish, the extremely arid interior was inhabited primarily by the Atacameño tribe. They are noted for building fortified towns called pucarás.

The coastal cities originated in the 16th, 17th, and 18th centuries during the time of the Spanish Empire, when they emerged as shipping ports for silver produced in Potosí and other mining centers. During the 19th century, the desert came under control of Bolivia, Chile, and Peru.

With the discovery of sodium nitrate deposits and as a result of unclear borders, the area soon became a zone of conflict and resulted in the War of the Pacific. Chile annexed most of the desert, and cities along the coast developed into international ports, hosting many Chilean workers who migrated there.

With the guano and saltpeter booms of the 19th century, the population grew immensely, mostly as a result of immigration from central Chile.

In the 20th century, the nitrate industry declined and at the same time, the largely male population of the desert became increasingly problematic for the Chilean state. Miners and mining companies came into conflict and protests spread throughout the region.

San Pedro de Atacama, at about 2,400 m (8,000 ft) elevation, is like many of the small towns. The town's church was built by the Spanish in 1577. Most people who go to tour the sites in the desert stay in the town of San Pedro de Atacama.

The Atacama Desert is in the top three tourist locations in Chile.

The Atacama Desert ecoregion is located in northern Chile between Argentina on the west and the Pacific Ocean on the east. Running east from the Pacific Ocean to the Andes Mountains — an extremely arid, almost barren, landscape predominates — due to the fact that in many areas rainfall has never been recorded.

Despite the aridity of this desert, some cacti (Eulychnia), perennials (Nolana) and mesquite (Prosopis) occur in basins where occasional water accumulation occurs.

Relatively few animal species have adapted to this arid environment and therefore, faunal diversity and density is extremely low. Even bacteria are scarce, and in many portions of the desert insects and fungi are absent.

The intrinsic value of the Atacama Desert's plant and animal communities lies in the unique nature of their composition, the high levels of endemism and some species' remarkable adaptations for survival in some of the planet's most demanding conditions.

The Atacama Desert is one of the driest places in the world as well as the only true desert to receive less precipitation than the polar deserts. According to estimates, the Atacama Desert occupies 105,000 sq km (41,000 sq mi), or 128,000 sq km 2 (49,000 sq mi) if the barren lower slopes of the Andes are included.

Although the almost total lack of precipitation is the most prominent characteristic of the Atacama Desert, exceptions may occur.

Most of the desert is composed of stony terrain, salt lakes (salares), sand, and felsic lava that flows towards the Andes. The desert owes its extreme aridity to a constant temperature inversion due to the cool north-flowing Humboldt ocean current, and to the presence of the strong Pacific anticyclone.

The most arid region of the Atacama Desert is situated between two mountain chains (the Andes and the Chilean Coast Range) of sufficient height to prevent moisture advection from either the Pacific or the Atlantic Oceans, a two-sided rain shadow.

The Atacama Desert may be the oldest desert on earth, and has experienced extreme hyperaridity for at least 3 million years, making it the oldest continuously arid region on earth.

The Atacama is so arid that many mountains higher than 6,000 m (20,000 ft) are completely free of glaciers. Only the highest peaks (such as Ojos del Salado, Monte Pissis, and Llullaillaco) have some permanent snow coverage.

In spite of the geographic and climatic conditions of the desert, a rich variety of flora has evolved there. Over 500 species have been gathered within the border of this desert. These species are characterized by their extraordinary ability to adapt to this extreme environment.

Most common species are the herbs and flowers such as thyme, llareta, and saltgrass (Distichlis spicata), and where humidity is sufficient, trees such as the chañar (Geoffroea decorticans), the pimiento tree, and the leafy algarrobo (Prosopis chilensis).

The desert is also home to cacti, succulents, and other plants that thrive in a dry climate. Cactus species here include the candelabro (Browningia candelaris) and cardon (Echinopsis atacamensis), which can reach a height of 7 m (23 ft) and a diameter of 70 cm (28 in).

The Atacama Desert flowering desierto florido can be seen from September to November in years with sufficient precipitation.

The climate of the Atacama Desert limits the number of animals living permanently in this extreme ecosystem. Some parts of the desert are so arid, no plant or animal life can survive.

Outside of these extreme areas, sand-colored grasshoppers blend with pebbles on the desert floor, and beetles and their larvae provide a valuable food source in the lomas (hills). Desert wasps and butterflies can be found during the warm and humid season, especially on the lomas. Red scorpions also live in the desert.

Birds are probably the largest animal group in the Atacama. Humboldt penguins live year-round along the coast, nesting in desert cliffs overlooking the ocean. On salt flats both near the Pacific and inland, Andean flamingos flock to eat algae.

Other birds (including species of hummingbirds and sparrows) visit the lomas seasonally to feed on insects, nectar, seeds, and flowers. The lomas help sustain several threatened species, such as the endangered Chilean woodstar.

Because of the desert's extreme aridity, only a few specially adapted mammal species live in the Atacama, such as Darwin's leaf-eared mouse. The less arid parts of the desert are inhabited by the South American gray fox and the viscacha (a relative of the chinchilla).

Larger animals, such as guanacos and vicuñas, graze in areas where grass grows, mainly because it is seasonally irrigated by melted snow. Vicuñas need to remain near a steady water supply, while guanacos can roam into more arid areas and survive longer without fresh water. Seals and sea lions often gather along the coast.