Bahuaja-Sonene National Park of Peru is part of the largest multinational tropical protected area in the world. It protects an area comprised of tropical rain forest, savanna, flooded grasslands, hills and mountains; harboring some of the wildest and least impacted habitats in the world. 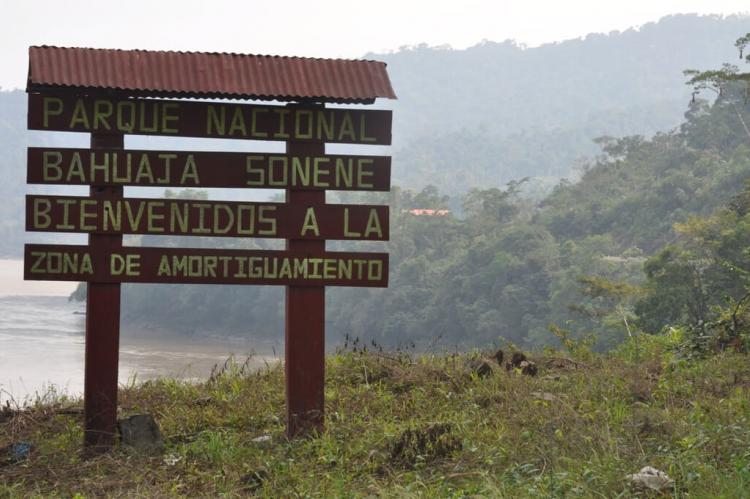 Bahuaja-Sonene National Park is a protected area of Peru, located in the departments of Madre de Dios and Puno. Declared in 1996, the National Park covers 1,091,416 ha (2,696,947 acres or 4,214 square mi). The area harbors some of the wildest and least impacted habitats in the world.

The National Park protects an area comprised of tropical rain forest, savanna and intermittently flooded grasslands similar to the Pantanal of Brazil, as well as hills and mountains with elevations ranging from 500 m (1,640 ft) to 2,450 m (8,038 ft).

The main rivers in the area include the Heath, the Tambopata and the Candamo. Bahuaja-Sonene National Park gets its name from the Ese-Eja native Amazonian words for "Tambopata" (Bahuaja) and "Heath" (Sonene).

Pampas del Heath National Sanctuary, a tropical savanna nested in lowland Amazon rain forest, is shared by Peru and Bolivia and lies to the northeast of the two parks. These are part of a chain of protected areas in southern Peru and south-central Bolivia, constituting the largest multinational tropical protected area in the world.

The Heath River, which originates in Lake Titicaca in the Peru-Bolivia high Andes, separates the Bahuaja-Sonene and Madidi National Parks and constitute the border between the two countries.

The area of Bahuaja-Sonene is the ancestral land of the Ese'eja indigenous group. Living in small communities, they cultivated manioc (yuca), foraged for wild fruits and plants in the forest and hunted for wild animals such as tapirs, deer and game birds. Their descendants still reside here.

Avafauna found inside the park include: the white-tailed goldenthroat, the Neotropic cormorant, the blue-and-yellow macaw, the harpy eagle, the white-throated toucan, the horned curassow, the great egret, the scarlet macaw, the bat falcon, the jabiru, the swallow-tailed hummingbird, etc.

Fauna found in the park include: the giant otter, the Giant anteater (Myrmecophaga tridactyla), the South American tapir, the marsh deer, the jaguar, the maned wolf, the puma, the bush dog, etc.