Sumidero Canyon is located in the state of Chiapas, in southern Mexico. The Grijalva River runs through the canyon, cutting spectacular walls which exhibit numerous small caves, rock formations and waterfalls. The canyon is surrounded by the Sumidero Canyon National Park. 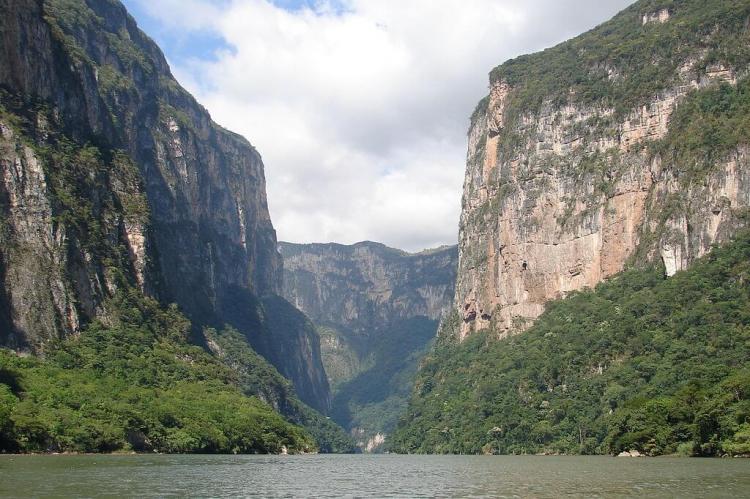 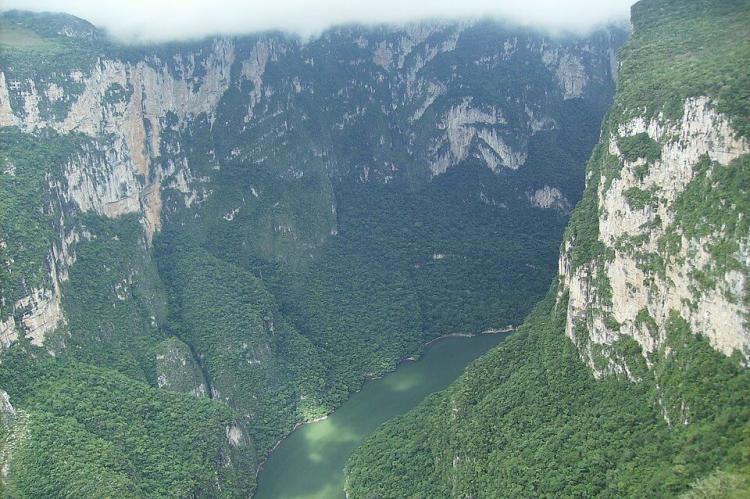 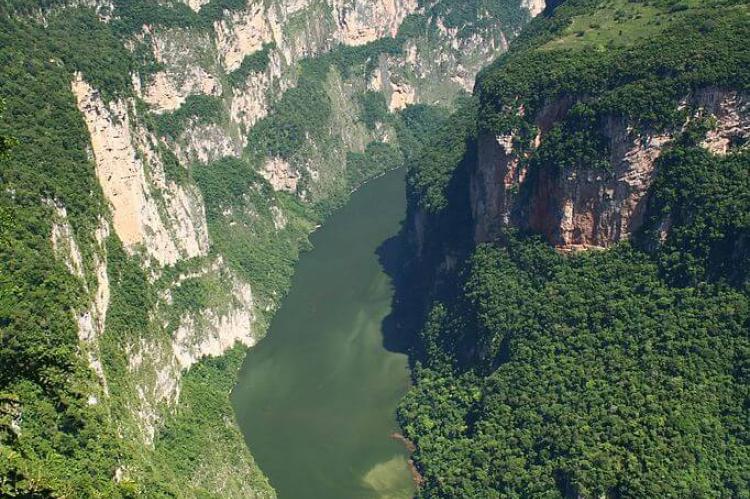 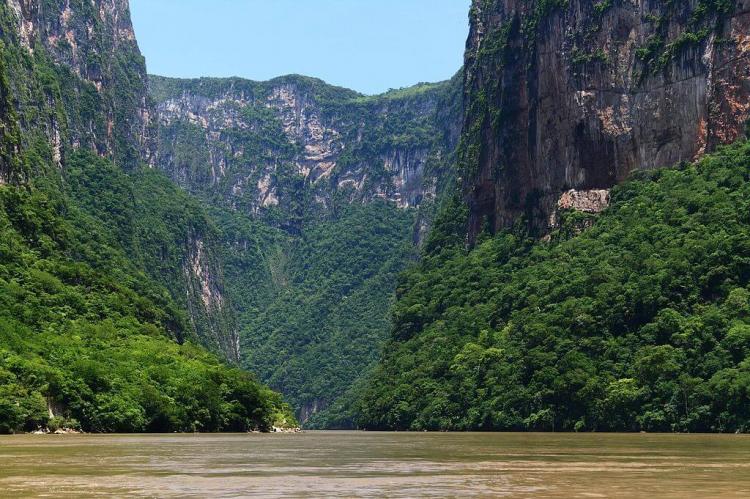 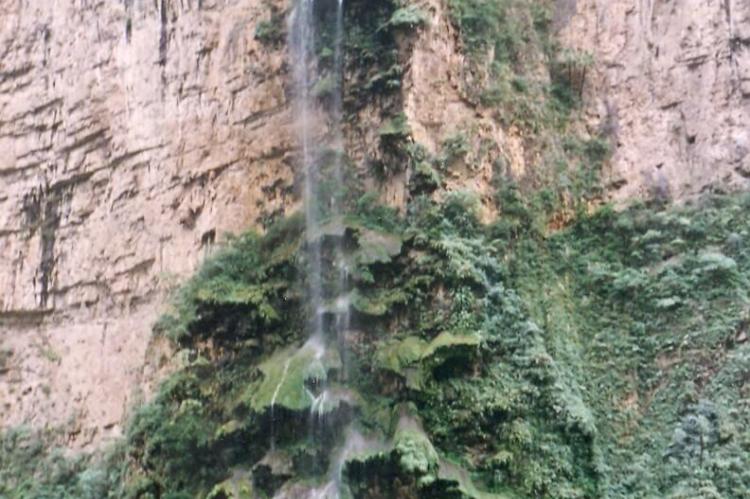 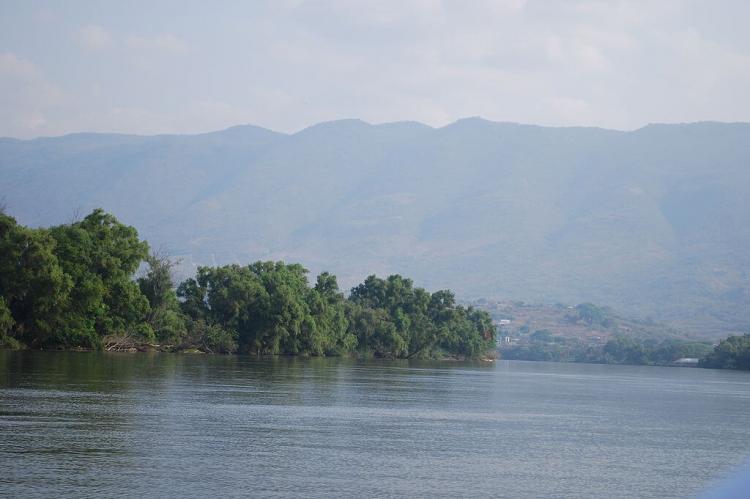 Sumidero Canyon is located along the Grijalva River, just north of the city of Chiapa de Corzo, in the state of Chiapas in southern Mexico. A crack in the area's crust and subsequent erosion by the river created the canyon.

At the north end of the canyon is the Chicoasén Dam and its artificial reservoir, one of several on the Grijalva River, which is important for water storage and the generation of hydroelectric power in the region.

The canyon proper is characterized by vertical walls which reach as high as 1,000 m (3,300 ft), with the river turning up to 90 degrees during the 13 km (8 mi) length of the narrow passage.

The best known of the area's caves is the Cueva de Colores ("Cave of Colors"). This cave gets its name from the filtration of magnesium, potassium and other minerals which form colors on the walls, especially shades of pink.

Sumidero Canyon is the second most visited site in Chiapas, after Palenque. The scenery of the canyon has become a major tourist attraction for the state, with developments for ecotourism and extreme sports. The navigable part of the Grijalva River is mostly used to ferry visitors into the canyon area.

The Grijalva River, formerly known as the Tabasco River, is a 480 km (300 mi) long river in southeastern Mexico. The river is named after Juan de Grijalva, a Spanish conquistador who explored the area in 1518.

The river rises in the Chiapas highlands and flows from Chiapas to the state of Tabasco through the Sumidero Canyon into the Bay of Campeche on the Gulf of Mexico. The river's drainage basin is 134,400 sq km (51,900 sq mi) in size.

Sumidero Canyon National Park is a federally protected natural area of Mexico, administered by CONAMP, which extends for 21,789 ha (53,840 acres) over four municipalities of the state of Chiapas.

Most of the vegetation in the park is a low to medium height deciduous rain forest, with small areas of mixed pine-oak forest and grassland.

Under the tree cover, there is significant plant diversity, including palms and araceas. Epiphytes (air plants) are abundant as well, along with orchids, Bromeliaceae and cactus. Cactus are primarily found on the vertical walls of the canyon and belong to the Acanthocereus family.

Pine-oak forests exist in the northwest of the park in the highest altitudes, covering about 87 ha (210 acres). They are part of the same type of forest found in the Soyaló region it is adjacent to. They are found at an altitude of 1,200 m (3,900 ft) asl and above in areas that receive precipitation of about 1,500 mm (59 in) annually.

The most common species is the oak Quercus conspersa, often found mixed with the two kinds of rain forest found in the park. Air plants are common here as well as bromeliads, orchids and plants from the Maxillaria, Lycaste, Cattleya and Laelia groups.

Throughout the history of the area, especially since it was definitively explored in the 1960's, the area's wildlife diversity has been severely negatively impacted by human encroachment in the form of settlements, agriculture and hunting. However, since Sumidero Canyon National Park was established in the 1980's, wildlife diversity has increased.

According to a CONANP study in 2007, there are 12 species of reptile here under protection, including the river crocodile (Crocodylus acutus), and one threatened species, the Yucatán banded gecko (Coleonyx elegans).

Birds are the most common type of animal in the park, with about 195 species documented. Six of these species are threatened and 17 are subject to special protection. One threatened bird species in the park is the great curassow (Crax rubra).

Relatively abundant species include Actitus macularia, Dendrocygna autumnalis, Egretta caerulea, Egretta thula, Tachybaptus dominicus and Coragyps atratus, all of which are associated with bodies of water.

There have been 53 species of mammals detected recently in the park, of which two are considered threatened, two in danger and two subject to special protection.