Saba National Marine Park encompasses the waters and sea bed encircling the Caribbean island of Saba, from the high water mark to 200 feet in depth. In total, the marine park covers approximately 5 square miles and is managed by the Saba Conservation Foundation. 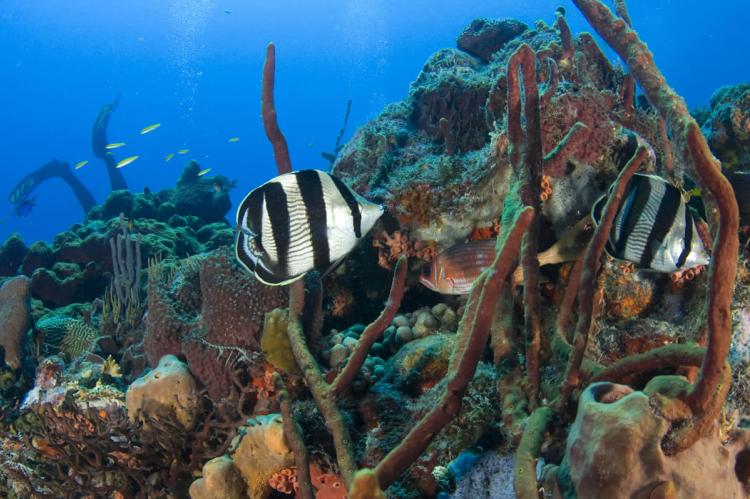 Saba National Marine Park encompasses the waters and sea bed encircling the Caribbean island of Saba, from the high water mark to 200 ft (60 m) deep. The marine park is managed by the Saba Conservation Foundation.

Saba is an island in the Caribbean Sea and is the smallest special municipality of the Netherlands, with a land area of only 13 sq km (5 sq mi). Together with Bonaire and Sint Eustatius it forms the BES islands (Caribbean Netherlands).

At the time of the Saba National Marine Park's creation in 1987, the government passed the Marine Environment Ordinance to protect the coral reefs and other marine life within the park, not to repair a damaged environment.

Being one of the few self-sustaining marine parks in the world, the Saba National Marine Park raises revenue through visitor fees, souvenir sales and donations. Access to the park is free for all residents of Saba.

A number of regulations are designed to ensure that the park's thriving aquatic life remains healthy. Zones divide the area according to acceptable uses. Commercial fishing is forbidden in certain places to prevent overfishing.

The zoning plan divides the park in four management zones for various recreational and commercial uses: a recreational zone, a no-take zone, a multi-purpose zone and a mooring zone. Approximately one-third of the Park is zoned primarily for diving.

As a result of restrictions on fishing and anchoring, the Saba National Marine Park is home to healthy corals and an abundance of fish. There are still large groupers, snappers, grunts, hinds and coneys that are in healthier populations than many other locations in the Caribbean.

Most coral formations found in the park can be categorized as "coral encrusted boulders;" these boulders are volcanic in origin.

Also formed by past volcanic activity are the marine park’s spectacular underwater pinnacles, coral encrusted volcanic structures rising out of the sea floor 100 m (330 ft) below. The pinnacles are covered with corals and sponges and attract sharks, tuna, foraging sea turtles and an abundance of reef fish.