The stone spheres of Costa Rica are an assortment of over 300 petrospheres, located on the Diquís Delta. The Pre-Columbian Chiefdom Settlements with Stone Spheres of the Diquís are physical evidence of pre-Columbian hierarchical societies. 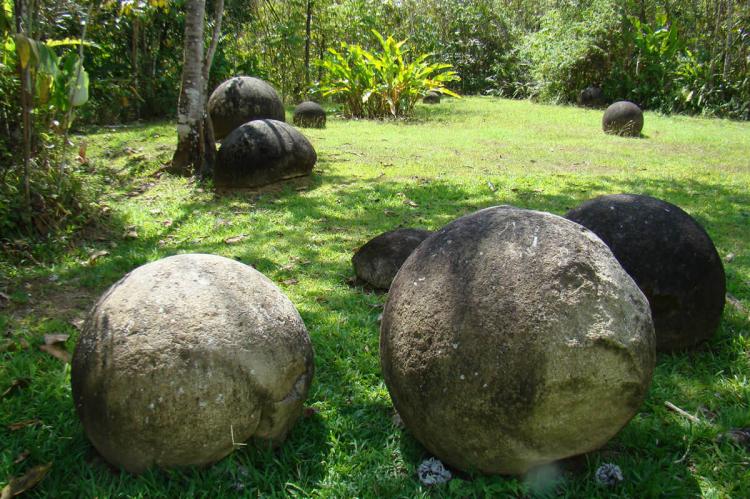 The stone spheres of Costa Rica are an assortment of over three hundred petrospheres, located on the Diquís Delta and Isla del Caño in Costa Rica. Locally, they are known as bolas de piedra ("stone balls").

The spheres are attributed to the extinct Diquís culture. They are the best-known stone sculptures of the Isthmo-Colombian ;area. They are thought to have been placed in lines along the approach to the houses of chiefs, but their exact significance remains uncertain.

The Palmar Sur Archaeological Excavations are a series of excavations of a site located in the southern portion of the country, known as the Diquís Delta. The site is located on approximately 10 ha (25 acres) of property that was previously owned by the United Fruit Company in the alluvial plain of the Térraba River.

Pre-Columbian Chiefdom Settlements with Stone Spheres of the Diquís

The Pre-Columbian Chiefdom Settlements with Stone Spheres of the Diquís, a World Heritage Site located in southern Costa Rica, illustrate the physical evidence of pre-Columbian hierarchical societies. The exceptional stone spheres continue to leave researchers speculating about the method and tools of their production.

The Stone Spheres of the Diquís range in size from a few centimeters to over 2 m (6.6 ft) in diameter and weigh up to 15 tons. Most are sculpted from gabbro, the coarse-grained equivalent of basalt. There are a dozen or so made from shell-rich limestone and another dozen made from a sandstone.

They appear to have been made by hammering natural boulders with other rocks, then polishing with sand. The degree of finishing and precision of working varies considerably.

The four sites contain artificial mounds, paved areas and burial sites and are considered unique examples of the complex social, economic and political systems of the period AD 500–1500.

The artificial mounds, paved areas, burial sites and, most significantly, a collection of stone spheres between 0.7 m and 2.57 m (27 to 100 in) in diameter, whose meaning, use and production remain largely a mystery. The spheres are distinctive for their perfection, number, size and density, and placement in original locations.

Their preservation from the looting that befell the vast majority of archaeological sites in Costa Rica has been attributed to the thick layers of sediment that kept them buried for centuries.