The Curutchet House of La Plata, Argentina, was chosen by UNESCO from the work of Le Corbusier as an outstanding contribution to the Modern Movement: a testimonial to the invention of a new architectural language that made a break with the past. 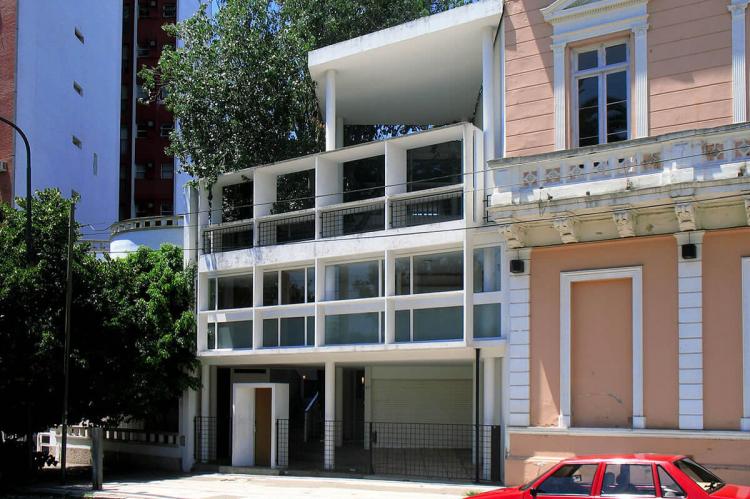 The Architectural Work of Le Corbusier, an Outstanding Contribution to the Modern Movement

Chosen from the work of Le Corbusier, 17 sites spread over seven countries, are recognized by UNESCO as World Heritage Sites: a testimonial to the invention of a new architectural language that made a break with the past.

They were built over a period of a half-century, in the course of what Le Corbusier described as "patient research."

These masterpieces of creative genius also attest to the internationalization of the architectural practice across the planet.

The Curutchet House, La Plata, Argentina, was commissioned by Dr. Pedro Domingo Curutchet, a surgeon, in 1948 and included a small medical office on the ground floor. Construction began in 1949 under the supervision of Amancio Williams and was completed in 1953.

The house of Dr Curutchet reflects the solutions that the Modern Movement sought to apply during the 20th century to the challenges of inventing new architectural techniques to respond to the needs of society.

The house consists of four main levels with a courtyard between the house and the clinic. The building faces the Paseo del Bosque park. The main facade incorporates a brise soleil.

Inside the house, the marvelous architecture can be seen. There is a tree inside the house i.e. the care was taken while designing that the tree will retain and still not disturb the beauty of the house.

The terrace, folding wooden curtains, inclined stair design, wardrobes, and kitchen were designed during 1949-1953 and are the same that are used in present-day modern designs.

The Curutchet House exemplifies Le Corbusier's five points of architecture and incorporates a ramp and a spiral staircase.

The house represents a landmark in Corbusier own trajectory because it exemplifies how cultural and historical characteristics of architecture (the elements of the traditional Latin American courtyard house) can be rewritten using Corbusier's five points of modern architecture.

Dr. Curutchet's house is also one of the very few buildings that Corbusier built attached to pre-existing buildings and perfectly responding to a historical context.

With this house Corbusier proved, more than with any of his other projects, that modern architecture could in fact be in a harmonious dialogue with traditional architecture.