Founded by the Portuguese in 1549 as the first capital of Brazil, Salvador de Bahia is one of the oldest colonial cities in the Americas. The Historic Center is distinguished by its religious, civil and military colonial architecture dating from the 17th to the 19th centuries. 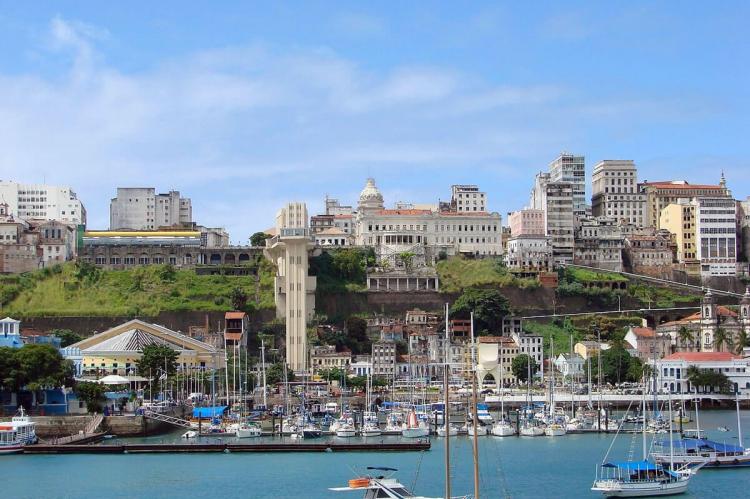 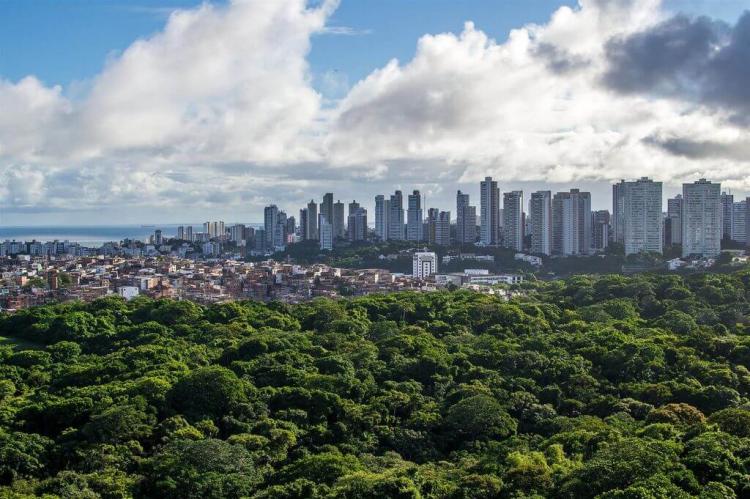 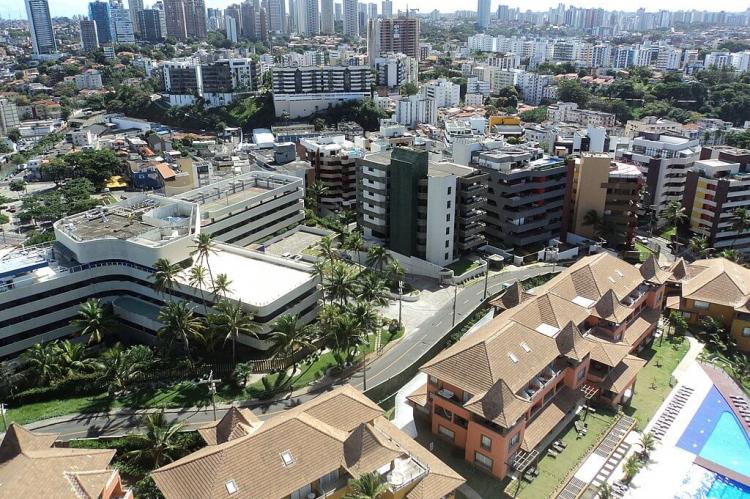 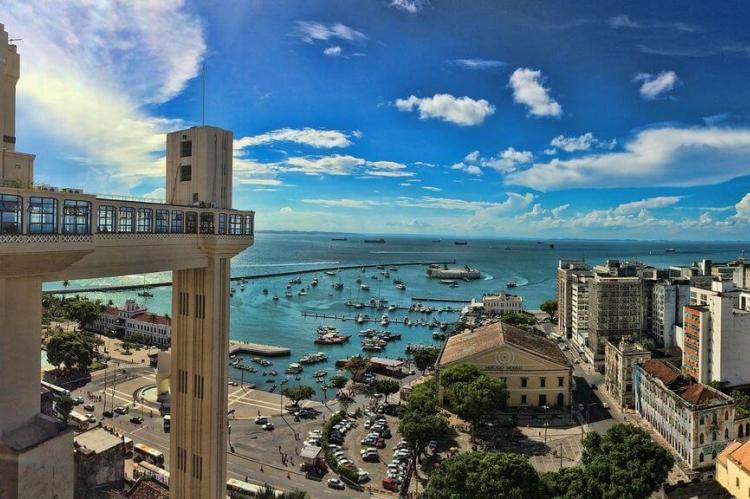 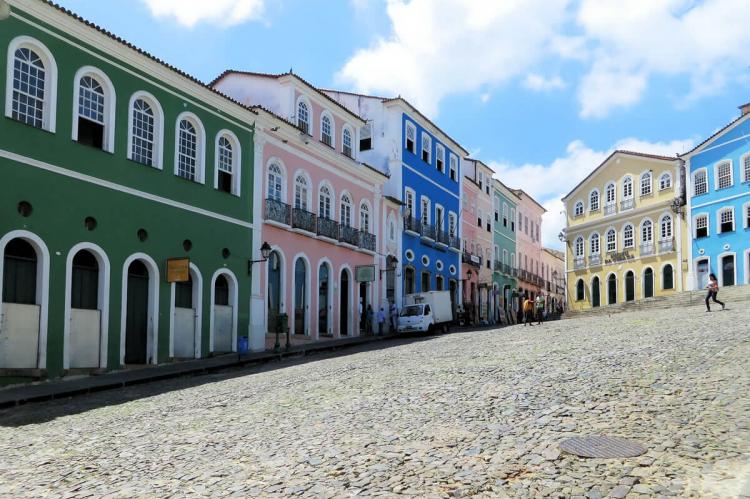 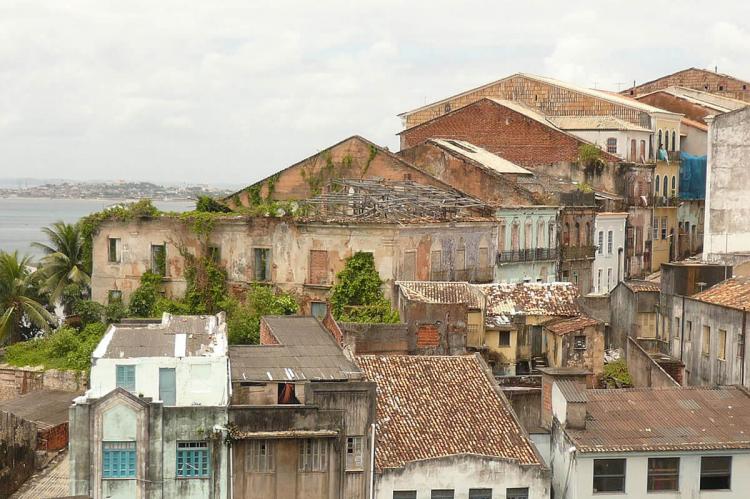 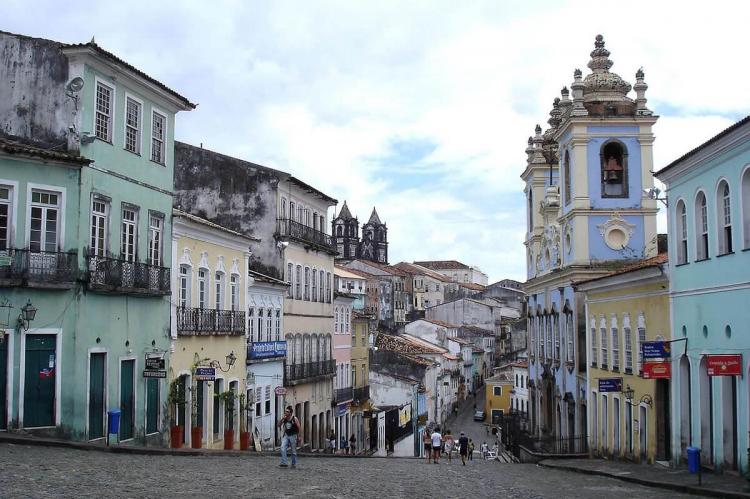 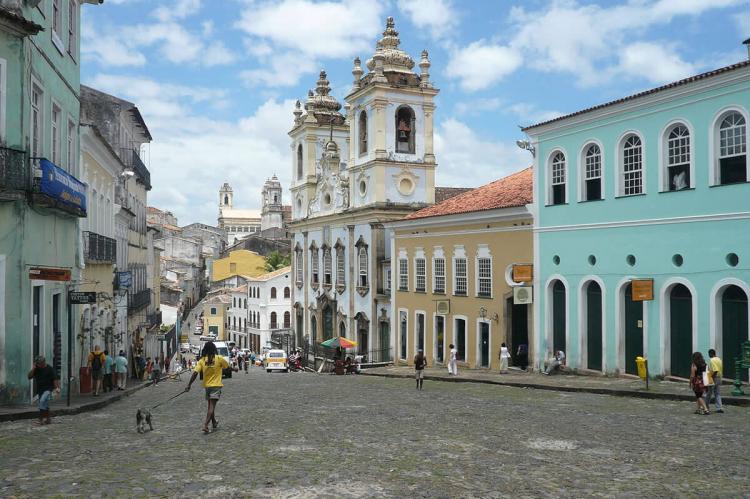 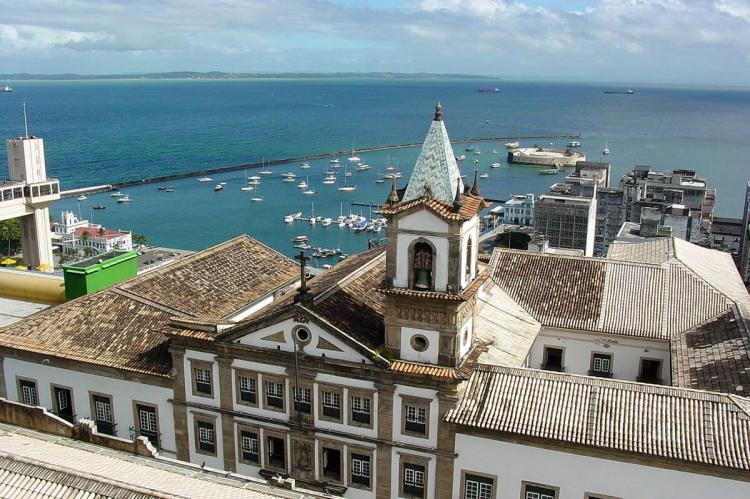 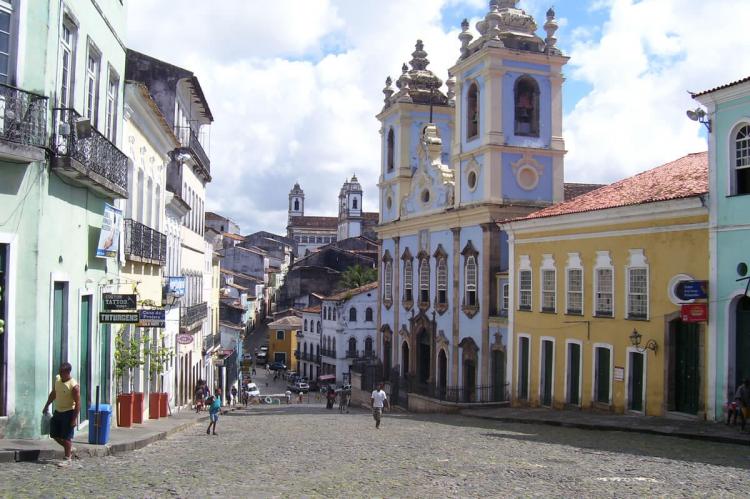 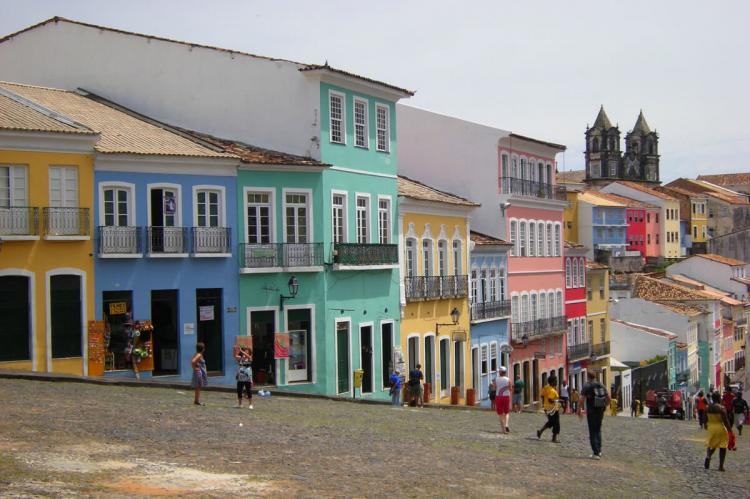 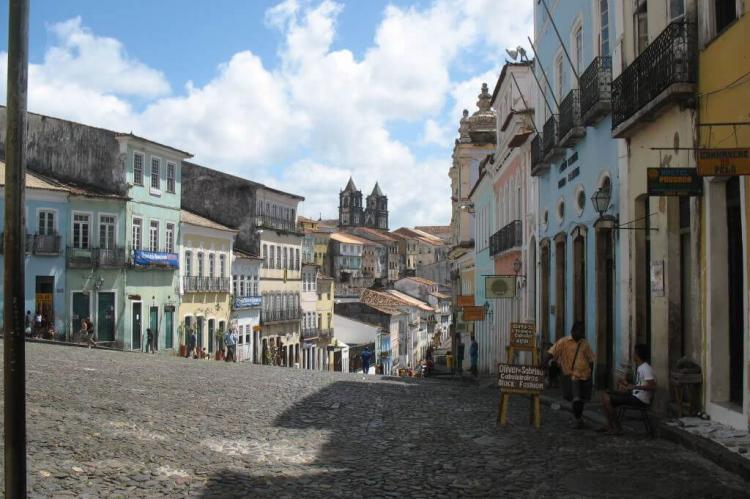 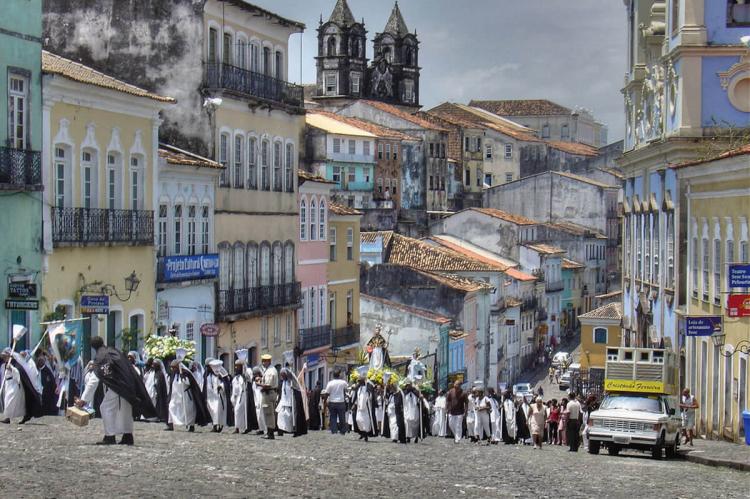 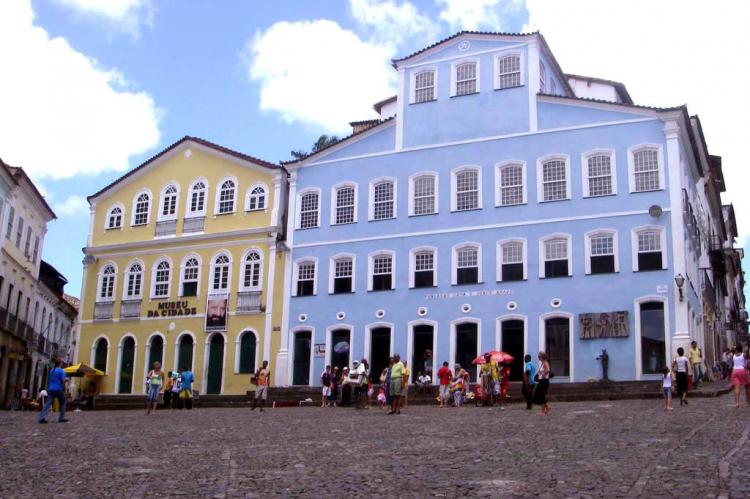 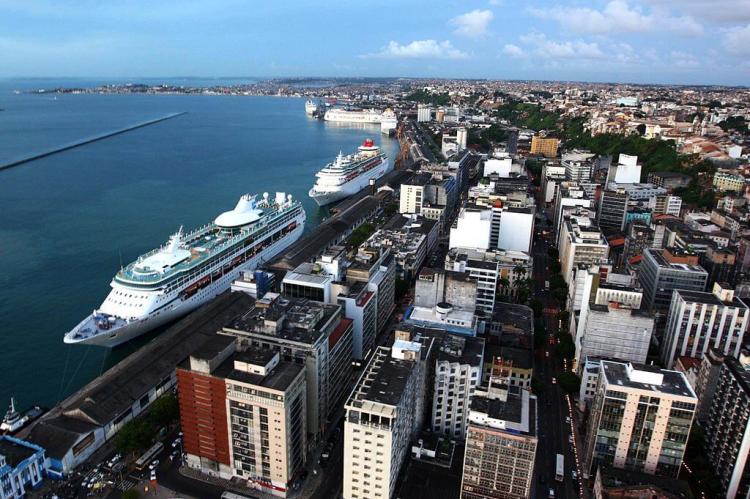 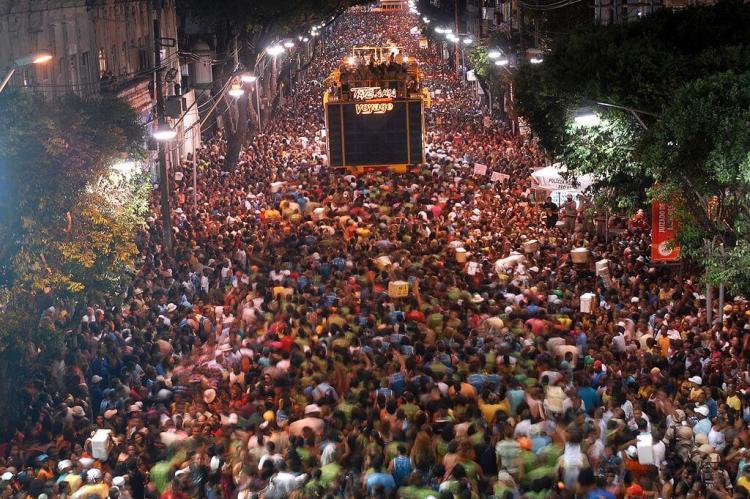 Salvador (São Salvador da Bahia de Todos os Santos), is the capital of the Brazilian state of Bahia. The city is noted for its cuisine, music, dance and architecture.

Founded by the Portuguese in 1549 as the first capital of Brazil, Salvador is one of the oldest colonial cities in the Americas. A sharp escarpment divides its Lower Town (Cidade Baixa) from its Upper Town (Cidade Alta) by some 85 m (278 ft).

The Elevador Lacerda, Brazil's first urban elevator, has connected Lower Town and Upper Town since 1873. A hydraulic elevator at first, it was converted to electrical operation in 1906. Its two towers were renovated in 1930, in an Art Deco style. The elevator has four lifts, carrying 27 passengers each on a 30-second ride.

With 2.9 million people (2017), Salvador is the largest city in the Northeast Region and the 4th largest in the country, after São Paulo, Rio de Janeiro and Brasília.

Salvador de Bahia has a trade-wind tropical rain forest climate characterized by high temperatures, high humidity and rainfall in each month of the year, without a marked dry season. Temperatures are relatively consistent, showing little variance throughout the course of the year.

Salvador is the second most popular tourist destination in Brazil, after Rio de Janeiro. Tourism and cultural activity are important generators of employment and income, boosting the arts and the preservation of artistic and cultural heritage. Porto da Barra Beach in Barra has been named one of the best beaches in the world.

The Bahian Carnival (Carnaval) is the largest party on the planet. Its dimensions are gigantic. For an entire week, almost 4 million people celebrate throughout 25 km (16 mi) of streets, avenues and squares. The celebration involves the participation of over 100,000 people and, on average, 800,000+ visitors converge on the city.

Salvador's historical and cultural aspects were inherited by the intermarriage of such ethnic groups as Native-Indian, African and European. This mixture can be seen in the religion, cuisine, cultural manifestations, and custom of Bahia's people. African cultural practices are particularly celebrated.

Salvador's population is the result of 500 years of interracial marriage. The majority of the population has African, European and Native American roots. The African ancestry of the city is from Angola, Benin, Congo, Ethiopia, Nigeria, Senegal and Mozambique.

According to an autosomal DNA study from 2015, the ancestral heritage of the population of Salvador was estimated to be 50.8% African, 42.9% European and 6.4% Native American.

Salvador de Bahia forms the heart of the Recôncavo, Bahia's rich agricultural and industrial maritime district, and continues to be a major Brazilian port. Its metropolitan area, housing approximately 3,900,000 people (2018) forms the wealthiest one in Brazil's Northeast Region (2015).

Economically, Salvador is one of Brazil's more important cities. Since its founding the city has been one of Brazil's most prominent ports and international trading centers. Boasting a large oil refinery, a petrochemical plant and other important industries, the city has made great strides in reducing its historical dependence on agriculture for its prosperity.

The Historic Center of Salvador de Bahia is a UNESCO World Heritage site. The city center is a defensive, administrative and residential neighborhood perched atop an 85 m (278 ft) high escarpment.

This densely built colonial city par excellence of the Brazilian northeast is distinguished by its religious, civil and military colonial architecture dating from the 17th to the 19th centuries.

Founded in 1549 on a small peninsula that separates Todos os Santos Bay from the Atlantic Ocean on the northeast coast of Brazil, Salvador became Portuguese America’s first capital and remained so until 1763. Its founding and historic role as colonial capital associate it with the theme of world exploration.

Salvador de Bahia was also (from 1558) the first slave market in the New World, with slaves arriving to work on the sugar plantations.

As the first capital of Brazil, Salvador witnessed the blending of European, African and Amerindian cultures. Echoes of this multicultural past survive to the present day in the historic center's rich tangible and intangible heritage.

Salvador de Bahia is also notable as one of the major points of convergence of European, African and American Indian cultures of the 16th to 18th centuries.

The settlement of Salvador de Bahia, strategically situated overlooking an immense bay on the Brazilian coast, was aimed at centralizing the activities of the metropolis in Portuguese America and facilitating trade with Africa and the Far East.

The city grew quickly, becoming Brazil’s main seaport and an important center of the sugar industry and the slave trade.

The main districts of the Historic Center are:

In addition to major buildings dating to the 17th and 18th centuries — such as Catedral Basílica de Salvador, the churches and convents of São Francisco, São Domingos, Carmo, and Santo Antônio — the Historic Center retains a number of 16th century public spaces:

This World Heritage site also includes baroque palaces, among them the Palácio do Arcebispado, Palácio Saldanha and Palácio Ferrão. There are many streets lined with brightly colored houses, often decorated with fine stuccowork, that are characteristic of the colonial city. 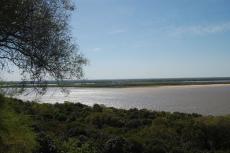 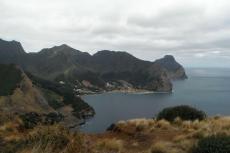 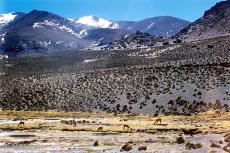