The Templo Mayor was the main temple of the Mexica peoples in their capital city of Tenochtitlan, which is now Mexico City. Construction of the first temple began sometime after 1325 and it was rebuilt six times. The main plaza of Mexico City today was developed to the southwest of this archaeological site. 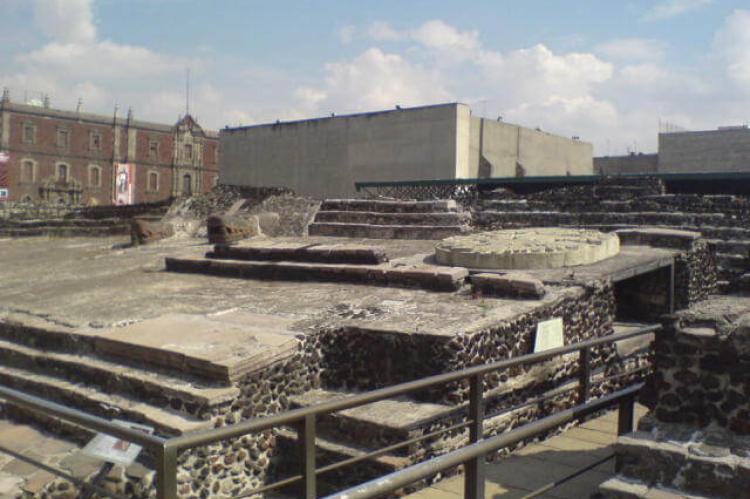 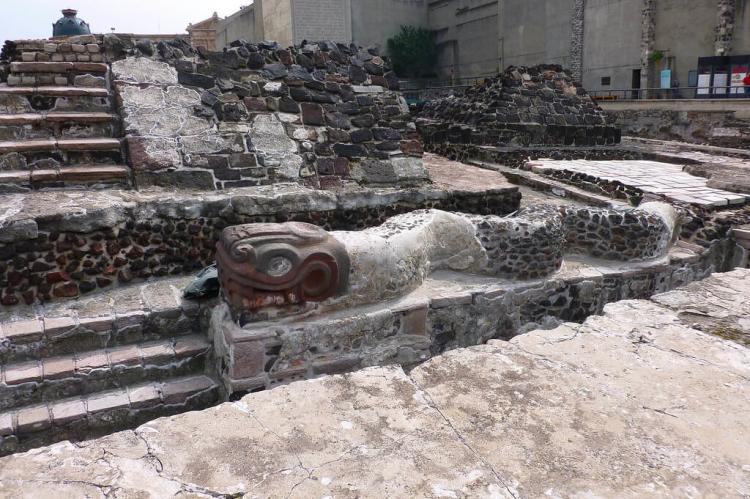 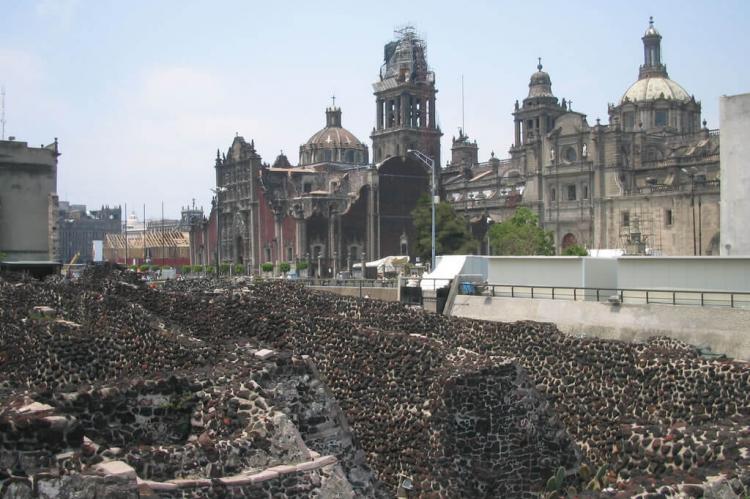 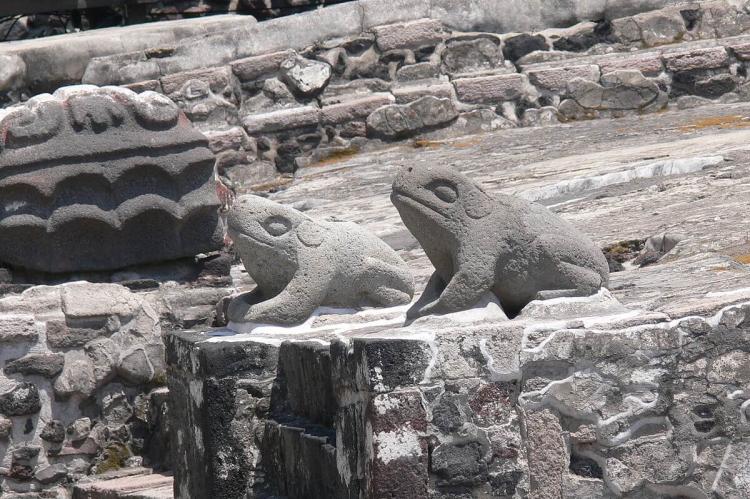 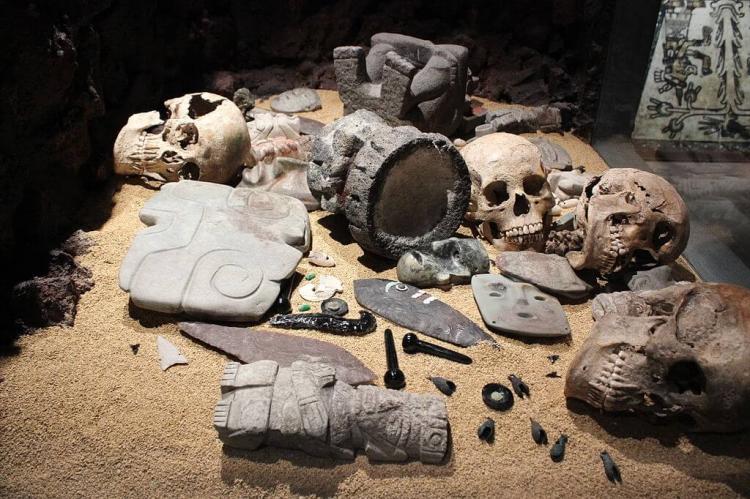 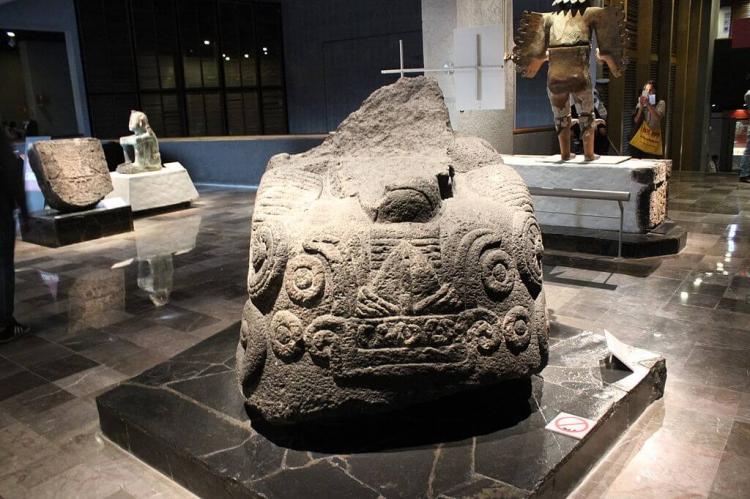 The Templo Mayor ("Greater Temple") was the main temple of the Mexica peoples in their capital city of Tenochtitlan, which is now Mexico City. Its architectural style belongs to the late Postclassic period of Mesoamerica.

The Zócalo, or main plaza of Mexico City today, was developed to the southwest of this archaeological site, which is located in the block between Seminario and Justo Sierra streets. The site is part of the Centro Histórico: Historic Center of Mexico City.

The Templo Mayor was called the Huēyi Teōcalli in the Nahuatl language. It was dedicated simultaneously to Huitzilopochtli, god of war, and Tlaloc, god of rain and agriculture, each of which had a shrine at the top of the pyramid with separate staircases. The spire in the center was devoted to Quetzalcoatl in his form as the wind god, Ehecatl.

The Great Temple devoted to Huitzilopochtli and Tlaloc, measuring approximately 100 by 80 m (328 by 262 ft) at its base, is dominated the Sacred Precinct. Construction of the first temple began sometime after 1325, and it was rebuilt six times. The temple was destroyed by the Spanish in 1521 to make way for the new cathedral.

After the destruction of Tenochtitlan, the Templo Mayor, like most of the rest of the city, was taken apart and the area redeveloped by new structures of the Spanish colonial city. In the first decades of the 20th century, Manuel Gamio found part of the southwest corner of the temple and his finds were put on public display.

The push to fully excavate the site did not come until late in the 20th century. On 21 February 1978, workers for the electric company were digging at a place in the city then popularly known as the "island of the dogs". It was so named because it was slightly elevated over the rest of the neighborhood and, during flooding, street dogs would congregate there.

From 1978 to 1982, specialists directed by archaeologist Eduardo Matos Moctezuma worked on the project to excavate the Temple. Initial excavations found that many of the artifacts were in good enough condition to study. Efforts coalesced into the Templo Mayor Project, which was authorized by presidential decree.

The excavated site consists of two parts: the temple itself, exposed and labeled to show its various stages of development, along with some other associated buildings, and the museum, built to house the smaller and more fragile objects.

Aztec temples were typically expanded by building over prior ones, using the bulk of the former as a base for the latter, as later rulers sought to expand the temple to reflect the growing greatness of the city of Tenochtitlan. Therefore, digging down through this temple takes us back in time.

The first temple was begun by the Aztecs the year after they founded the city, and the temple was rebuilt six times. All seven stages of the Templo Mayor, except the first, have been excavated and assigned to the reigns of the emperors who were responsible for them.

Construction of the first Templo Mayor began sometime after 1325. This first temple is only known through historical records, because the high water table of the old lake bed prevents excavation.

According to these records, the first pyramid was built with earth and perishable wood, which may not have survived to the present time.

The second temple was built during the reigns of Acamapichtli, Huitzilihuitl and Chimalpopoca between 1375 and 1427. The upper part of this temple has been excavated, exposing two stone shrines covered in stucco on the north side. A chacmool was uncovered as well. On the south side, there is a sacrificial stone called a "téchcatl" and a sculpted face.

The third temple was built between 1427 and 1440 during the reign of Itzcoatl. A staircase with eight stone standard-bearers is from this stage bearing the glyph with the year Four-Reed (1431). These standard bearers act as "divine warriors" guarding the access to the upper shrines.

The fourth temple was constructed between 1440 and 1481 during the reigns of Moctezuma I and Axayacatl. This stage is considered to have the richest of the architectural decorations as well as sculptures.

Most offerings from the excavations are from this time. The great platform was decorated with serpents and braziers, some of which are in the form of monkeys and some in the form of Tlaloc.

The fifth temple (1481–1486) is dated during the short reign of Tizoc. During these five years, the platform was recovered in stucco and the ceremonial plaza was paved.

The sixth temple was built during the reign of Ahuizotl. He finished some of the updates made by Tizoc and made his own; as shown on the carvings of the "commemoration stone of the huei teocalli", showing the two tlatoqueh celebrating the opening of the temple during the last day of the month Panquetzaliztli, dedicated to Huitzilopochtli; day 7 acatl of the year 8 acatl (Dec 19th, 1487).

The Sacred Precinct was walled off and this wall was decorated with serpent heads. He built three shrines and the House of the Eagle Warriors.

The seventh and last temple is what Hernán Cortés and his men saw when they arrived to Tenochtitlan in 1519. Very little of this layer remains because of the destruction the Spaniards wrought when they conquered the city. Only a platform to the north and a section of paving in the courtyard on the south side can still be seen.