Alberto Manuel Brenes Biological Reserve is a nature reserve in the central part of Costa Rica. It is part of the Arenal Tilaran Conservation Area which protects tropical forest area near San Ramon. 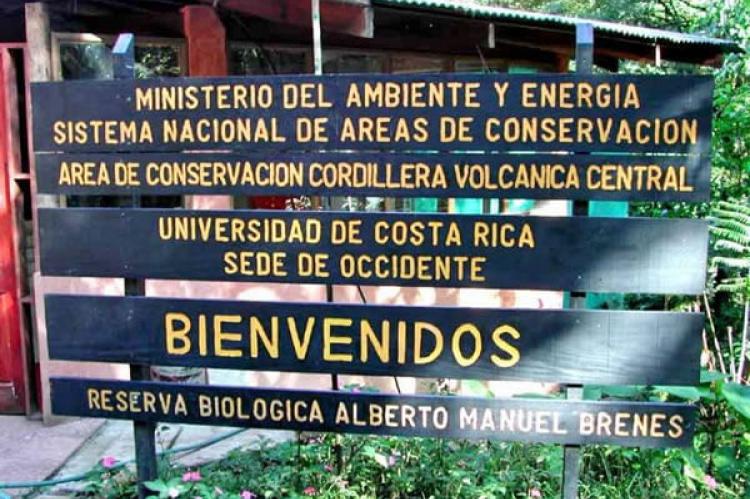 Alberto Manuel Brenes Biological Reserve is a nature reserve in the central part of Costa Rica. It is part of the Arenal Tilaran Conservation Area; which protects tropical forest area near San Ramon. 99.6% of its territory lies in the canton of San Ramon (Los Angeles and Zapotal Districts) in the province of Alajuela and the remaining 0.4% in the canton of Montes de Oro (Union District) province of Puntarenas.

Finally, on August 20, 1993 it was officially published in the government gazette as the Alberto Manuel Brenes Biological Reserve. The reserve operates under the direction of the University of Costa Rica and the Ministry of Environment, Energy and Telecommunications (MINAET).

Flora: Many species of the families Rubiaceae and Heliconiaceae understorey stand throughout the year for its showy flowering. They draw attention the three strata present at the site, which highlight dosel (canopy) species reaching heights of 114 - 147 feet (35 - 45 m), including Elaegia uxpanamensis and Ocotea Morae; as well as the palmito (Iriartea deltoid) and several species of fig trees (Ficus spp.). In the reserve it has been collected a large number of endemic species.

The forests of the Alberto Manuel Brenes Biological Reserve have high biological diversity; there have been cataloged more than 50 species as endemic, so far, to Costa Rica. They have been also collected at least 15 plant species that are new records for science, as is the case of Ticodendron incognitum giving rise to the Ticodendraceae family, discovered in 1989 by renowned botanist Jorge Gómez Laurito, a researcher at the University from Costa Rica.

Among small mammals it has been registered the presence of tolomuco (Eira barbara), opossum (zorro pelón, Didelphys marsupialis), weasel (Mustela frenata) and several species of squirrels, rats and wild mice. It is estimated that there are about 50 genera and 75 species in the group of bats, where stand the (Platyrhinus vitatus) and white bat (Ectophylla alba).

The group of birds is very diverse. Among the most striking species are the quetzal (Pharomachrus mocinno), the umbrella bird (Cephalopterus glabricollis), the bell bird (Procnias tricarunculata), the white hawk (Pseudastur albicollis) and the goldfinch (Myadestes melanops); as well as several species of trogon, hummingbirds, woodpeckers, flycatchers, kettles and kingfishers, among others.

The herpetofaunal is represented by at least 30 species of amphibians and 36 species of reptiles such as snakes and lizards. Among the snakes the velvet (Bothrops asper), the stone hand (Atropides nummifer), olive ridley (Bothriechis lateralis), the coral (Micrurus nigrocinctus) and bocaracá (Botrhiechis schlegelii). Among non-poisonous snakes they have registered the boa (Boa constrictor), the zopilota (Clelia clelia) and false coral, among others.