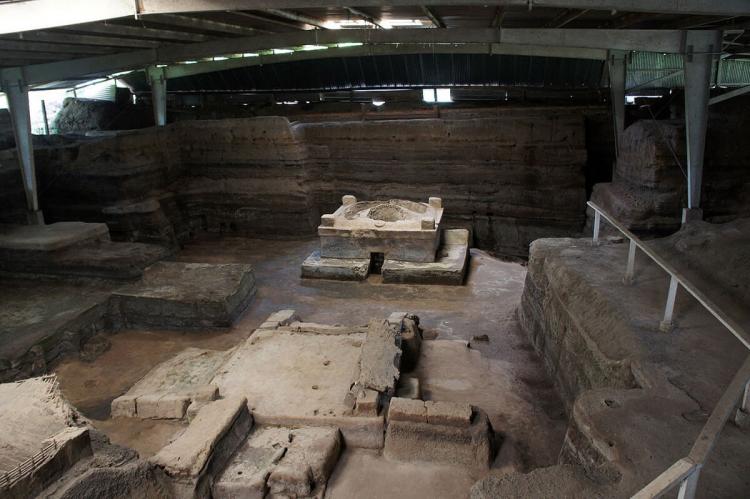 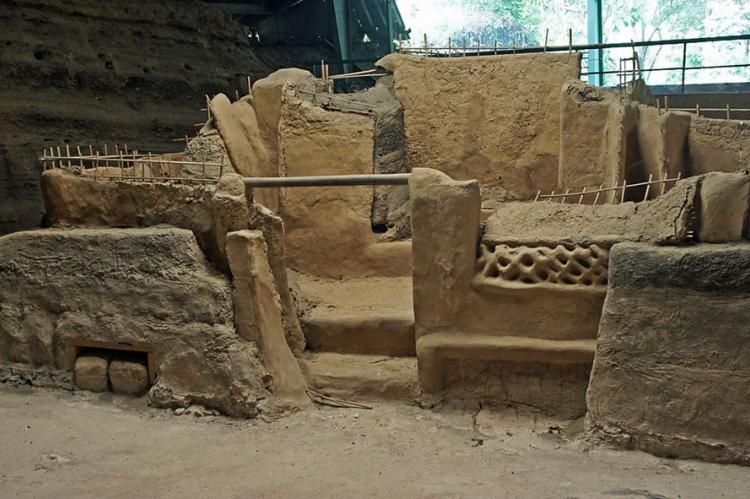 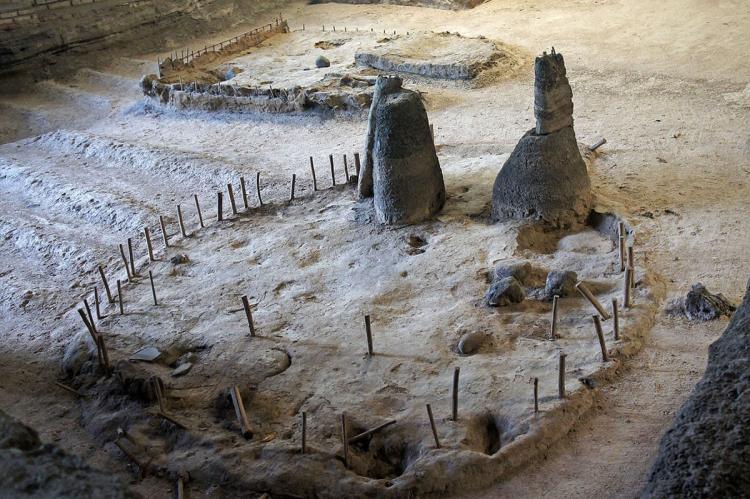 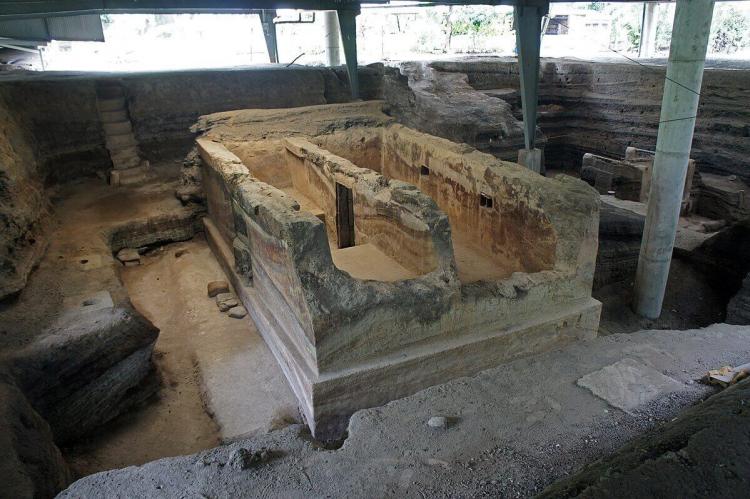 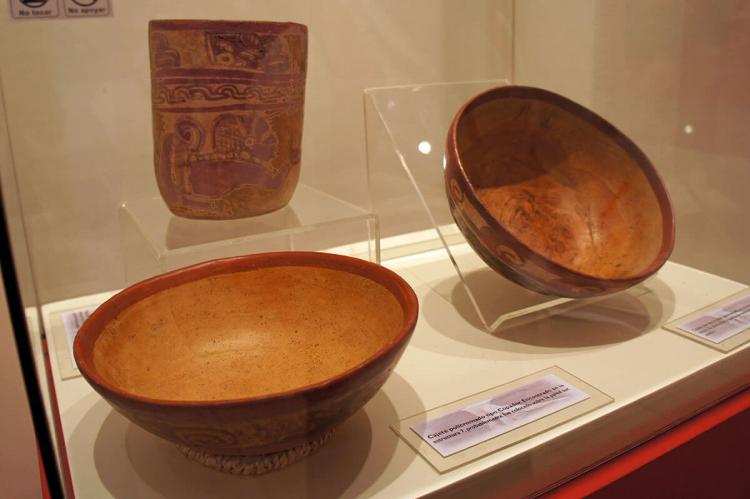 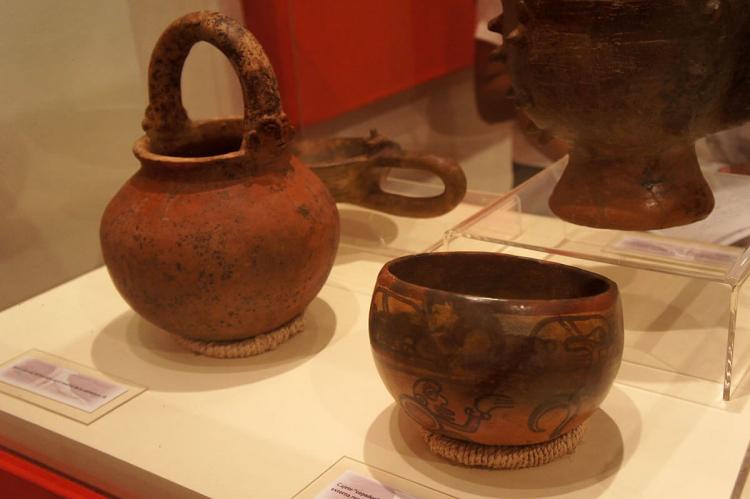 Joya de Cerén is an archaeological site located in the Department of La Libertad, El Salvador. The World Heritage Site contains the remains of a pre-Hispanic farming village that was covered by a volcanic eruption in the seventh century AD. It is often referred to as the "Pompeii of the Americas."

The site was discovered during the construction of grain-storage silos in 1976, when a clay-built structure was exposed by a bulldozer. Excavations were resumed in 1989 and been continuing since that time.

Around AD 500, the central and western parts of the territory of the modern Republic of El Salvador were buried beneath thick layers of volcanic ash from the Ilopango volcano.

The area was abandoned until the ash layer had weathered into fertile soil and the Joya de Cerén settlement was founded. Around AD 590, it was destroyed by the eruption of the Loma Caldera.

The eruption was phreatomagmatic in nature, depositing alternating units of "muddy" pyroclastic surge beds and lapilli, pumice and volcanic bombs.

The eruption began with earth tremors and possible steam explosions, giving enough warning to allow the inhabitants of the nearby village to flee but violent enough that they left behind many of their most valuable personal items.

The circumstances of the volcanic event led to the remarkable preservation of architecture and the artifacts of ancient inhabitants in their original positions of storage and use, forming a time capsule of unprecedented scientific value that can be appreciated in present times.

Underneath the layers of volcanic ash, the best preserved example of a pre-Hispanic village in Mesoamerica can be found, with architectural remains, grouped into compounds that include civic, religious and household buildings.

To date, a total of 18 structures have been identified and 10 have been completely or partially excavated. All structures are made of earth and important features like thatch roofs and artifacts found in-situ have been recovered.

The excavated structures include a large community (public) building on the side of a plaza, two houses of habitation that were part of domiciles, three storehouses (one was in the process of being remodeled), one kitchen, and a sweat bath.

On the northeast side of the plaza there is a religious building devoted to communal festivities and one where a shaman practiced. Rammed earth construction was used for the public buildings and the sauna, and wattle and daub (which is highly earthquake resistant) for household structures.

The degree of preservation also applies to organic materials, from garden tools and bean-filled pots to sleeping mats, animal remains and religious items that normally deteriorate in tropical conditions and were part of the subsistence and daily life of the inhabitants. These have been preserved as carbonized materials or as casts in the ash deposits.

Several cultivated fields and other vegetation has also been uncovered. These include fields containing young and mature maize plants, a garden with a variety of herbs and a henequen (agave) garden. Various fruit trees, including guava and cacao, have also been found.

Although large numbers of archaeological investigations have been carried out in Mesoamerica during the history of archaeology, most researchers have focused in understanding the life of rulers and elite of these settlements.

The scientific study of Joya de Cerén has provided detailed information about the activities of ancient Mesoamerican farmers, becoming a unique example that illustrates the daily life of the Maya agriculturalists that inhabited the area.

All of these cultural materials found in such a special context have provided information about their function and meanings. As a whole, they have also provided information of the relation between the village itself and other settlements in the region which were part of a complex social interaction.

This exceptional site also provides unique evidence of the characteristics that illustrate the continuity in ways of life and facilitates the understanding of the relationship between present people and past activities and beliefs.

The Joya de Cerén archaeological site also constitutes a cultural symbol in El Salvador, where the past is linked to the present and plays an important role in human development of the region.

The conservation and presentation of its significance and its values contributes to the cultural identity and sense of belonging generated by this cultural heritage.