The Yucatán moist forests are an ecoregion of the tropical and subtropical moist broadleaf forests biome. The ecoregion covers a 26,900 sq mi area of the Yucatán Peninsula in southern Mexico, extending into northern Guatemala and northern Belize. 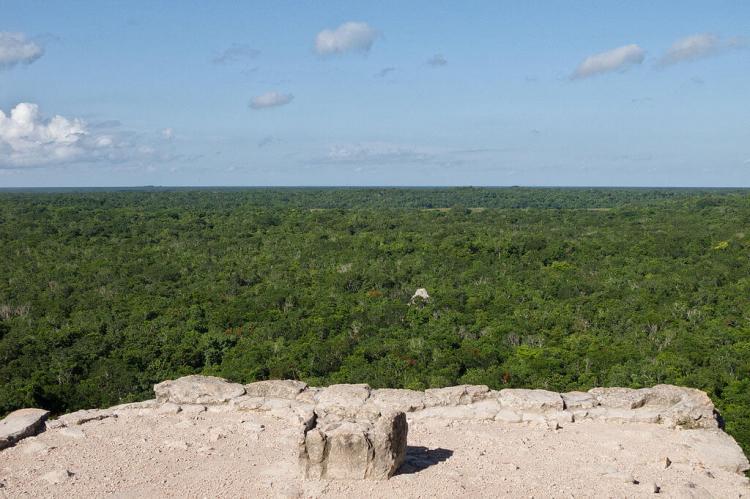 The Yucatán moist forests are an ecoregion of the tropical and subtropical moist broadleaf forests biome. The ecoregion covers an area of 69,700 sq km (26,900 sq mi) of the Yucatán Peninsula in southern Mexico, extending into northern Guatemala and northern Belize.

These moist forests on the Yucatán Peninsula of southeastern Mexico, and slightly beyond, are characterized by a tropical humid climate with little topographic relief.

The Yucatán forests form a biological corridor that allows the exchange of species between the drier forests of northern Yucatán and the more humid environments of the southwest and Central America. These forests are home to more than 15 species of amphibians, 40 reptiles, 200 birds and 90 mammals. Though there are few endemic species, biodiversity is high.

On the island of Cozumel, just off the eastern Yucatán, one can find many endemic species, including the Cozumel vireo, thrasher and emerald hummingbird as well as the Cozumel Island raccoon and coati.

The northern portion of the forest is an important area for many interesting bird species, including Caribbean elaenia, migratory species like prairie warblers and peregrine falcons, and species with local distributions like the Caribbean dove, the zenaida dove and the black catbird.

In addition to its rich forests, this ecoregion borders wetlands of great importance such as the Ria Lagartos mangroves and the Sian Ka'an wetlands.

In the tropical, humid climate of the Yucatán Moist Forests, the temperature remains fairly constant throughout the year. Some areas of deep soils called akalché are periodically flooded, providing a source of water for native villagers and wildlife species alike.

Much of this ecoregion lies atop rugged, weathered limestone called karst. Karst forests around the world are noted for having many endemic plant species.

In the warm and humid Yucatán Moist Forests, small spotted cats called margays climb high into the trees. They can actually rotate their rear paws inward so that they can climb down a tree and pounce from this position. They feed on small mammals, lizards and bird eggs.

Other famous felines here include the ocelots that stalk monkeys and birds, jaguarundi that hunt for small rodents and ground nesting birds, and the secretive jaguar. The Mexican black howler monkey is largely restricted to this ecoregion.

The ecoregion is home to an amazing variety of bird species, from black and white owls, King vultures, and ocellated turkeys to harpy eagles, great curassows, scarlet macaws, and Yucatán parrots. The southeastern part of the region, where the land is swampy, is filled with chicle, fiddlewood, and chaca trees. Palms are scattered in the understory.

Almost all the forests in the northern part of the coastal plain have been lost to logging, agriculture, and cattle farming. What's left of these forests continues to be cleared to make roads for expanding human populations in the area.

In addition, game hunting threatens many of the already endangered species here, and illegal trade in wild species is extensive. This area once supported a large human population and extensive agriculture during the Maya period.

Several reserves have provided a degree of protection to the remaining habitat but logging and cattle farming continue to destroy much of these forests.