Caracol State Park is a small state park in the state of Rio Grande do Sul, Brazil. It contains the dramatic Caracol Falls, a major tourist attraction. The waterfall is situated between the pine forest zone of the Brazilian Highlands and the southern coastal Atlantic Forest and has two cascades. 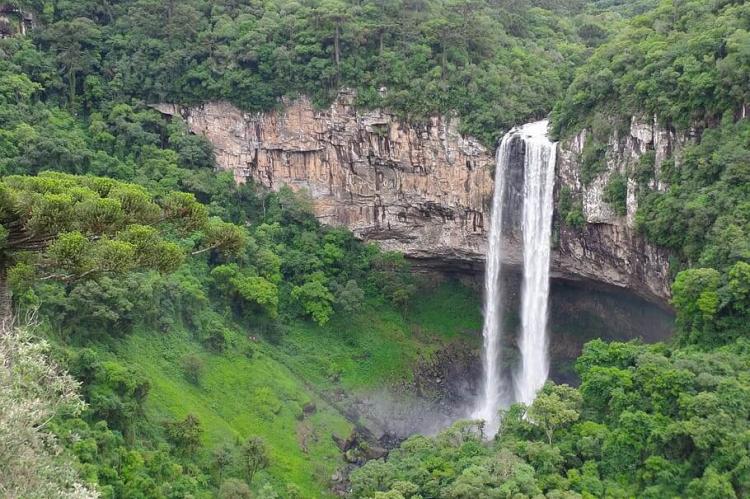 Caracol Falls is located about 7 km (4.3 mi) from Canela, Brazil in Caracol State Park. The 130 m (426 ft) set of waterfalls is formed by the Caracol River and cuts out of basalt cliffs in the Serra Geral mountain range, falling into the Vale da Lageana.

The waterfall is situated between the pine forest zone of the Brazilian Highlands and the southern coastal Atlantic Forest and has two cascades. The upper cascade is located approximately 100 m (328 ft) before the second cascade, which falls over an overhanging cliff ledge.

Caracol Falls is the second most popular natural tourist attraction in Brazil, trailing only Iguazu Falls. There is a nearby 30 m (100 ft) observation tower that offers an elevator and a panoramic view, as well as a cable car that gives tourists an aerial view of the waterfall.

Caracol State Park (Parque Estadual do Caracol) is a small state park in the state of Rio Grande do Sul, Brazil. It contains the dramatic Caracol Falls, a major tourist attraction.

The araucaria forest was devastated by logging from the 1920's to the 1950's, but some specimens with trunks up to 1.5 m (5 ft) in diameter are still found near the edge of the escarpment. The vegetation is now regenerating.

In prehistoric times the region was occupied by the hunter-gatherer Kaingangs. The first European explorers gave the region the name "Canela" from a caneleira (cinnamon) tree under which they made their camp.

The Wassen family of Germany arrived in 1863 and began farming and raising livestock. The natural beauty of the area led to hotels and vacation homes being built, starting in 1900. The resort town of Canela was founded in 1944.

Apart from vacationers, the economy depended on trade in cattle, pigs and their products, which were taken for sale to Porto Alegre and neighboring municipalities. A logging industry developed, exploiting the huge forest of araucaria pines, and accelerated when the railway arrived in 1924.

A pulp mill was built beside a tributary of the Arroio Caracol, which crosses the park, affecting the water quality. This and the destruction of the forests drove the tourists away. Many species of animals were also driven out, including the maned wolf (Chrysocyon brachyurus), which was hunted in the false belief that it killed cattle.

The park receives about 2,500,000 visitors annually. It is the most popular tourist destination in the southern region of Brazil after the Iguaçu National Park.