Iguazú National Park, located in the northeastern tip of Argentina, is situated on a basaltic line spanning the border with Brazil. The semicircular waterfall at the heart of this site is made up of many cascades producing vast sprays of water and is one of the most spectacular waterfalls in the world. 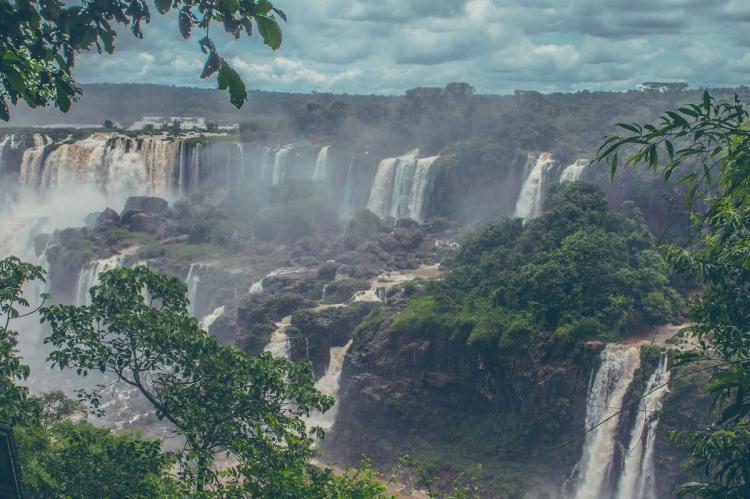 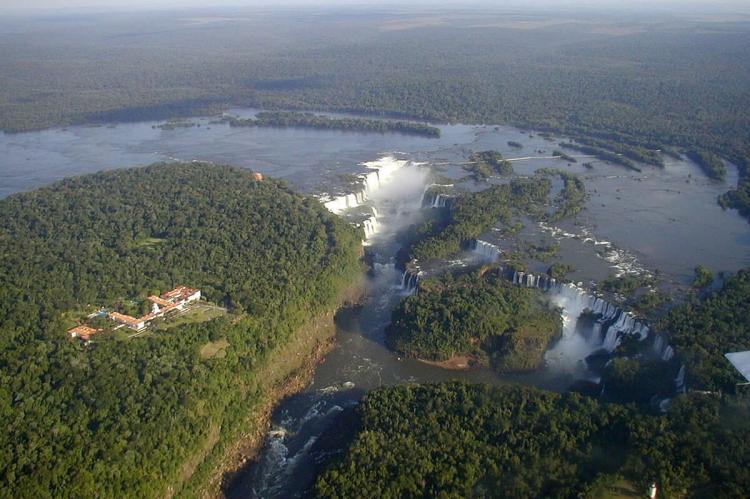 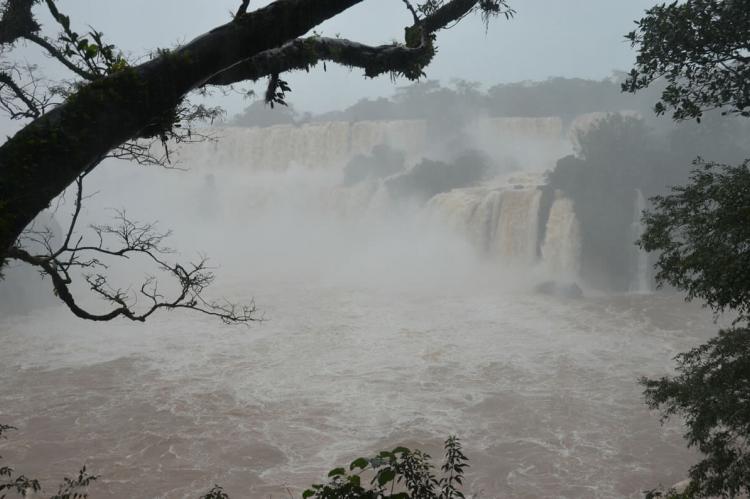 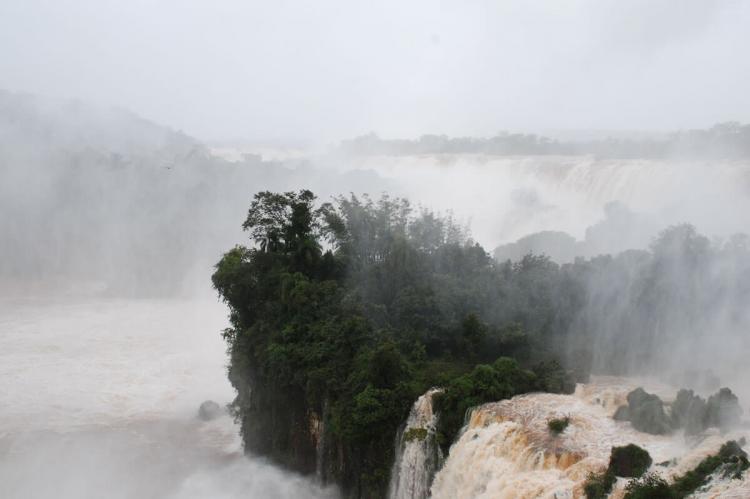 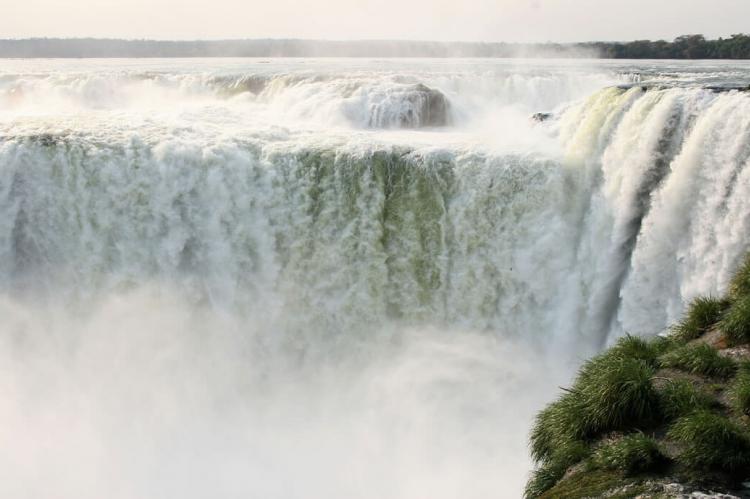 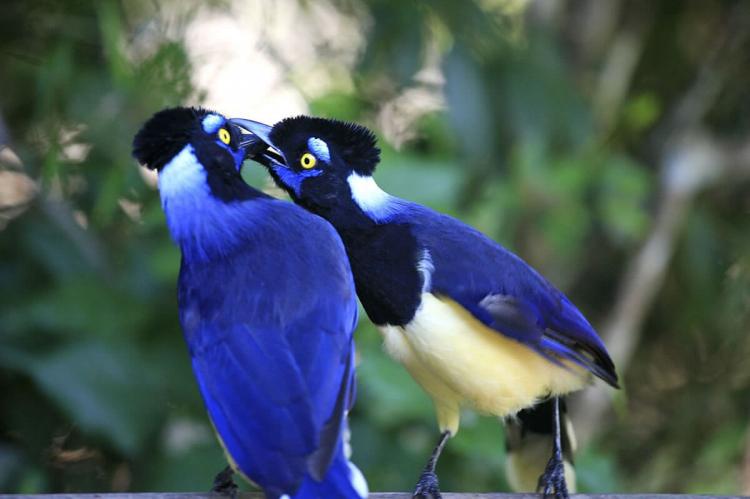 The Iguazú Falls are waterfalls of the Iguazu River on the border of the Argentine province of Misiones and the Brazilian state of Paraná. Shared with Brazil, they are known as the Iguaçu Falls on the Brazilian side of the border.

The river, aptly named after the indigenous term for "great water" forms a large bend in the shape of a horseshoe in the heart of the two parks and constitutes the international border between Argentina and Brazil before it flows into the mighty Parana River.

The Iguazu Falls are located where the Iguazu River tumbles over the edge of the Paraná Plateau, 23 km (14 mi) upriver from the Iguazu's confluence with the Paraná River.

The staircase character of the falls consists of a two-step waterfall formed by three layers of basalt. The steps are 35 and 40 m (115 and 131 ft) in height.

Numerous islands along the 2.7-km-long (1.7 mi) edge divide the falls into many separate waterfalls and cataracts, varying between 60 and 82 m (197 and 269 ft) high. The number of these smaller waterfalls fluctuates from 150 to 300, depending on the water level. About half of the river's flow falls into a long and narrow chasm called the Devil's Throat

To the left of this canyon, another part of the river forms 160-200 individual falls, which merge into a single front during flood stage. The largest falls are named San Martín, Adam and Eva, Penoni, and Bergano.

Iguazú National Park covers approximately 67,000 ha (165,500 acres) in the Misiones Province, located in the northeastern tip of Argentina and bordering the Brazilian state of Parana to the north.

Iguazú National Park, jointly with its sister Iguaçu National Park in Brazil, is among the world’s visually and acoustically most stunning natural sites for its massive waterfalls. It was inscribed by UNESCO in 1984.

In addition to its striking natural beauty and the magnificent liaison between land and water Iguazu National Park and the neighboring property constitute a significant remnant of the Atlantic Forest, one of the most threatened global conservation priorities.

This forest biome historically covering large parts of the Brazilian coast and extending into northern Argentina and Uruguay, as well as Eastern Paraguay, is known for its extreme habitat and species diversity, as well as its high degree of endemism.

Around 2000 plant species, including some 80 tree species have been suggested to occur in the property along with around 400 bird species, including the elusive Harpy Eagle. The parks are also home to some several wild cat species and rare species such as the broad-snouted Caiman.

Iguazú National Park has a long conservation history dating back to the early 20th Century and was declared a national park in 1934 illustrating the longstanding recognition of its quality.

Jointly with contiguous Iguaçu National Park in Brazil, which was inscribed on the World Heritage List in 1986, it constitutes one of the most significant remnants of the so-called Interior Atlantic Forest.

Today, the parks are mostly surrounded by a landscape that has been strongly altered due to heavy logging, both historically and into the present, the intensification and expansion of both industrial and small-scale agriculture, plantation forestry for pulp and paper and rural settlements.