Chavín de Huántar takes its name from the culture that developed between 1500 and 300 B.C. in this high valley of the Peruvian Andes. Chavin is one of the earliest and best known pre-Columbian sites and represents an important expression of the construction techniques of its time. 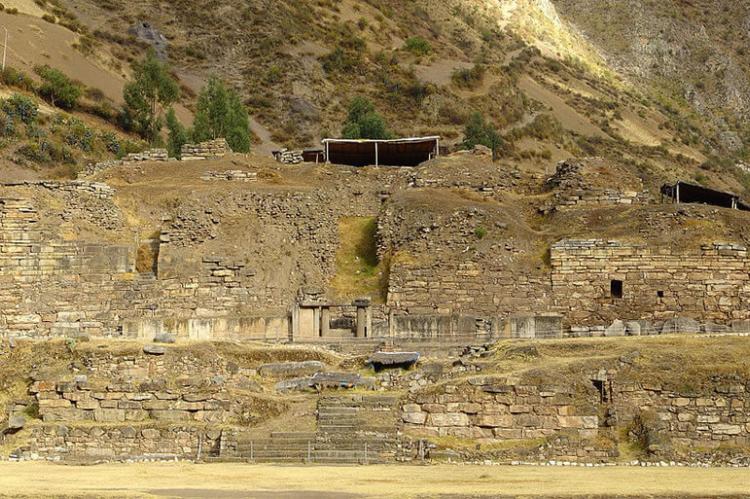 Chavín de Huántar is an archaeological site in Peru, located in the Ancash Region, 250 km (160 mi) north of Lima, at an elevation of 3,180 m (10,430 ft). The site lies east of the Cordillera Blanca, at the start of the Conchucos Valley.

Chavin is one of the earliest and best known pre-Columbian sites and represents an important expression of the decorative arts and construction techniques of its time. Its appearance is striking, with the complex of terraces and squares, surrounded by structures of dressed stone and the mainly zoomorphic ornamentation.

The archaeological site takes its name from the culture that developed between 1500 and 300 B.C. in this high valley of the Peruvian Andes. The site contains ruins and artifacts constructed as early as 1200 BCE and occupied by later cultures until around 400–500 BCE by the Chavín, a major pre-Inca culture.

The city was a ceremonial and pilgrimage center for the Andean religious world and hosted people from different latitudes, distances and languages. This former place of worship is one of the earliest and best-known pre-Columbian sites.

The city became an important center of ideological, cultural and religious convergence and dissemination around a cult spread over a wide territory of the Andes; as far as the north, central and south coasts, the northern highlands and high jungle of Peru.

The ceremonial and cultural nature of the site is evident in its architectural, technological and symbolic creation, which is characterized by coated quarried stone buildings and artificial terraces around plazas, containing an internal gallery system with an intricate network of vents and drains unprecedented in South America.

The buildings and plazas were decorated with lush anthropomorphic and zoomorphic symbolic iconography of extraordinary aesthetic synthesis, carved in bas-relief on tombstones, columns, beams and monolithic stone sculptures.

The Chavin Lanzón, the Raimondi Stela, the Tello Obelisk, the Falconidae Portico, the Circular Plaza and the tenon heads, among others, are evidence of the outstanding and monumental Chavin lithic art. All of these features make the archaeological site a unique monument of universal significance.

Findings at Chavín de Huántar indicate that social instability and upheaval began to occur between 500 and 300 BCE, at the same time that the larger Chavín civilization began to decline. Large ceremonial sites were abandoned, some unfinished, and were replaced by villages and agricultural land..