Situated off the Colombian Pacific coast, the island of Gorgona once hosted a notorious prison. Today, it is a National Natural Park of Colombia, designated in order to preserve its endemic species, the richly varied wildlife of the tropical forest and the coral reefs offshore. 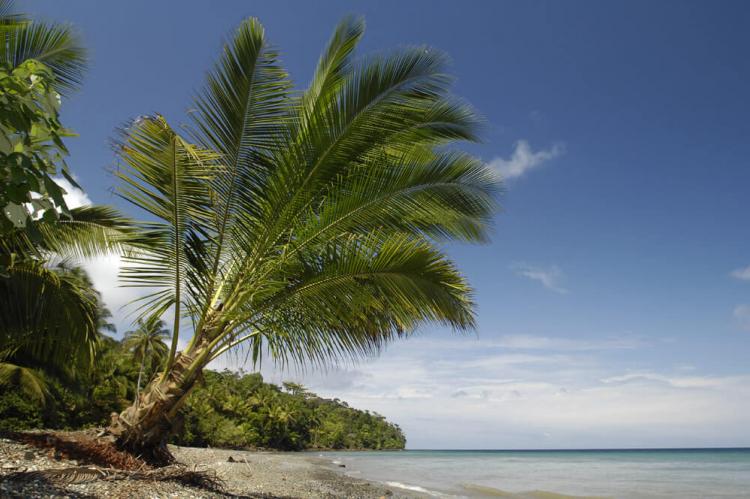 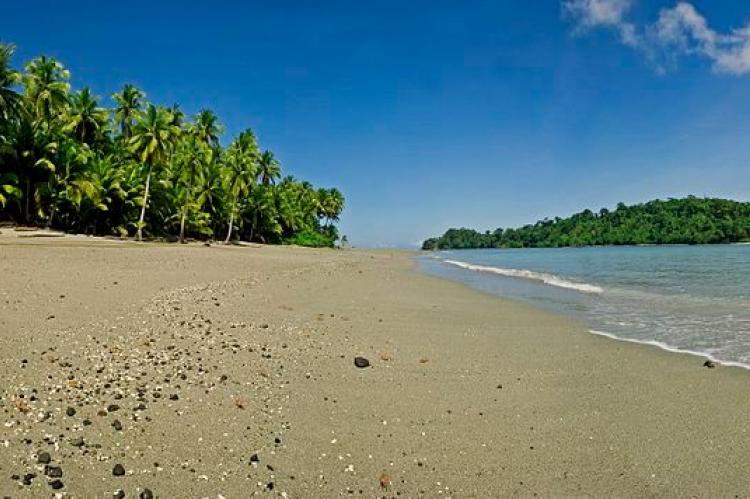 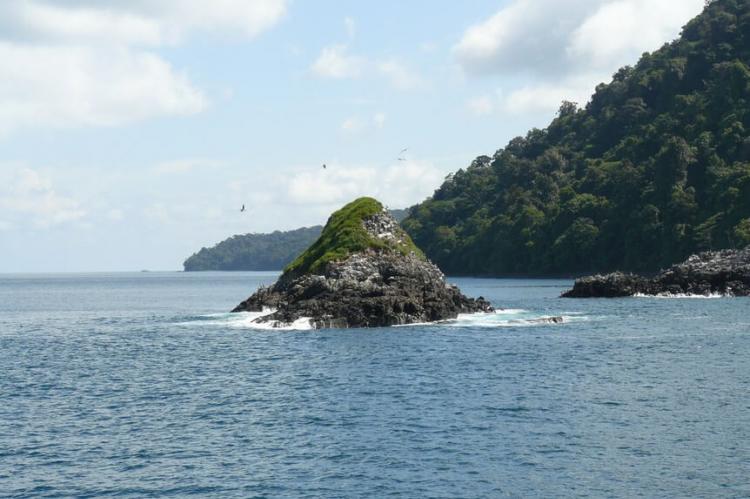 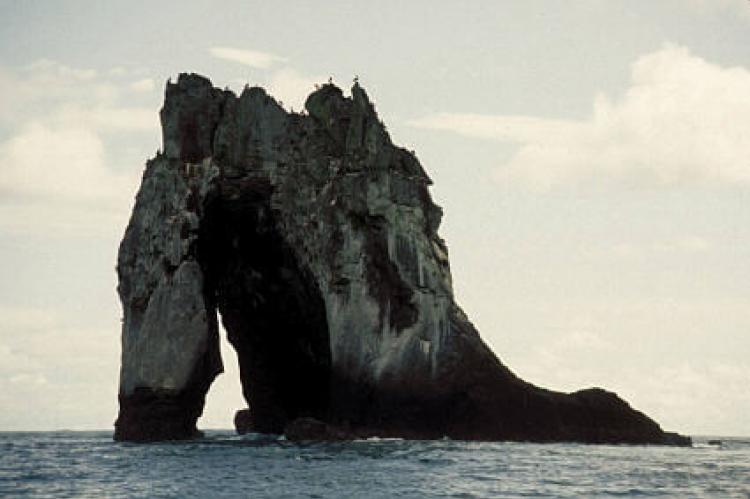 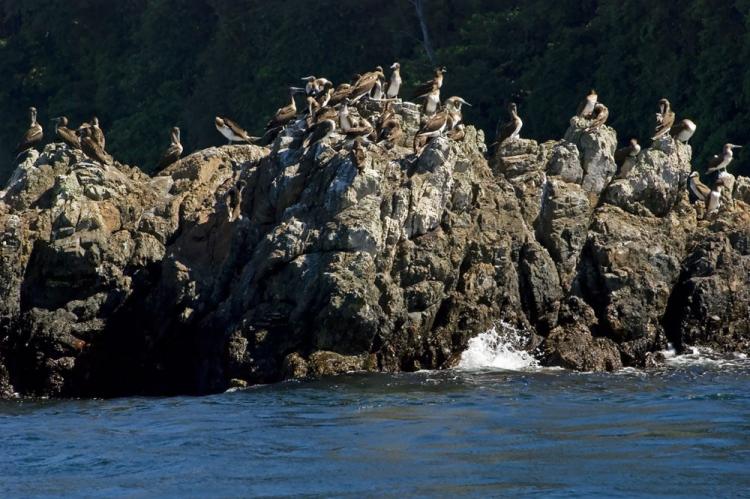 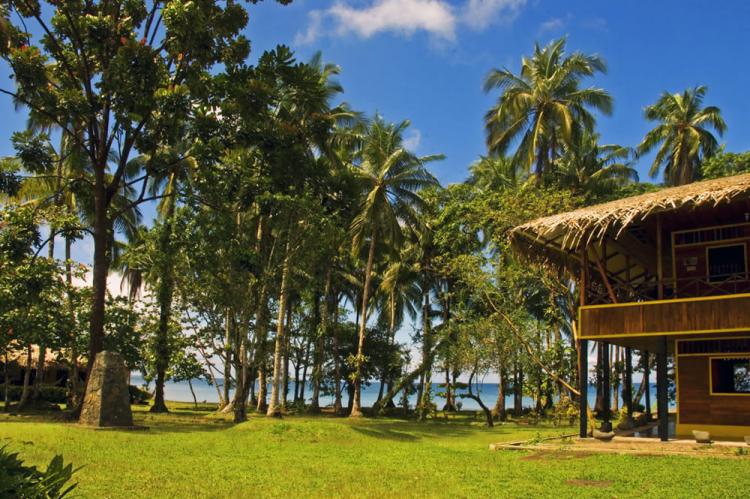 The island of Gorgona is situated approximately 28 km (17 mi) off the Colombian Pacific coast. The island is 9 km (5.6 mi) long and 2.5 km (1.6 mi) wide, with a total area of 26 sq km (10 sq mi). The only permanent population are the staff that is involved in the administration and preservation of the National Park.

Gorgona is separated from the South American continent by a 270 m (890 ft) deep underwater depression. The terrain of Gorgona is mountainous with the highest peak, Cerro La Trinidad, at a height of 338 m (1,109 ft). A humid, dense jungle covers the center of the island.

Southwest of Gorgona, there is a much smaller island called Gorgonilla which has an area of 49 ha (121 acres). Gorgona and Gorgonilla are separated by the Tasca strait, a distance of approximately 400 m (1,300 ft).

Several rock islets are found southwest of Gorgonilla, of which the largest is called "El Viudo" (the Widower). There are other rock islets located at the northern tip of Gorgona called Rocas del Horno (Oven Rocks). They are separated from Gorgona by Bocas de Horno (Oven mouths). These rocks rise up almost vertically out of the ocean.

Gorgona is recognized throughout the world for the abundantly rich settings it offers for diving. The oceanographic characteristics of its waters (temperature, salinity and transparency) are conducive to the birth of coral and rocky reefs, shelter and food for a great diversity of species.

Established as a Colombian Natural Natural Park in 1984, Gorgona is today often referred to as “Science Island” because of all the research carried out here.

The indigenous Kuna or Cuna of Urabá (Colombia) and San Blas (Panama), have the tradition of being the first settlers of the island. They left archaeological remains dating back to 1300 AD.

Spanish conquistadors first visited Gorgona in 1524 when it was discovered by Diego de Almagro. He named it San Felipe. In 1527, Francisco Pizarro, during his second expedition to Peru, took shelter on the the island while awaiting the arrival of provisions and preparing for a continuation of his efforts to conquer Peru.

Pizarro, who considered the island an "inferno", gave it the name Gorgona after losing many of his men to bites from the great number of snakes that inhabit the island. He compared them to Gorgons, female monsters from Greek mythology.

During the first half of the 20th century, Gorgona remained mostly uninhabited. In 1959 the island was turned into a penal colony. It became a state high security prison housing Colombia's more violent criminals, generally those convicted of murder and rape.

Gorgona became known as Colombia's Alcatraz Island due to the fact that it was surrounded by shark-infested waters, presumably making escape impossible. Gorgona functioned as a prison from 1959 until 1984, when scientists, environmentalists and human rights defenders led a campaign to close the prison.

The former prison buildings are in the process of being reclaimed by the jungle, having now being covered by dense vegetation, but a portion can still be seen.

The island was established as Gorgona Natural National Park in 1984, in order to preserve its endemic species, the richly varied wildlife of the tropical forest and the coral reefs offshore. The park covers a total maritime area of 620 sq km (240 sq mi).

Thanks to the frequent rains and high humidity, Gorgona has a rich hydrographic system that includes a large amount of water currents flowing towards the ocean. Most of these are located on the eastern side of the island.

Around 25 streams remain active all year round and 75 during the rainy season. There are also two lakes on the island: La Cabrera and Tunapurí.

Gorgona island has an average temperature of 26 °C (79 °F). With an average 90% humidity, intense rainfalls and misty days are frequent; with a calculated annual rainfall of approximately 7,000 mm (275 in).

The island's dense tropical rain forest has been isolated for thousands of years from the mainland and gives shelter to some unique species including the endemic blue anole (Anolis gorgonae). This species is in danger of extinction because of predation from the introduced western basilisk (Basiliscus galeritus), a large species of lizard in the family Corytophanidae.

Gorgona is famous for its snakes. There are three known venomous snakes including the much-feared Bothrops asper and two species of coral snake: Micrurus dumerili and Micrurus mipartitus.

Terrestrial mammals include the introduced white-headed capuchin, brown-throated sloth, Gorgona spiny rat and the agouti rodent. Over a dozen species of bats can also be found on the island.

There are few species of terrestrial birds on the island, probably due to the large number of reptile predators. The most common include endemic subspecies of black-crowned antshrike (Thamnophilus atrinucha gorgonae), bananaquit (Coereba flaveola gorgonae) and red-legged honeycreeper (Cyanerpes cyaneus gigas).

The most common water birds found on or near the island are the blue-footed booby, brown pelican and magnificent frigatebird. The brown booby breeding population nesting here is small but it is the most important breeding territory for Sula leucogaster etesiaca in the world.

The island is well known for the yearly passage of the humpback whale and their newborn from August to October, during their southward migration. Also found in the waters surround the island are the hammerhead shark, whitetip reef shark, sea turtle, whale shark and moray eel.