The Juan Fernández Archipelago is a sparsely inhabited group of islands in the Pacific Ocean, off the coast of Chile. The protected areas include the islands of Robinson Crusoe, Alexander Selkirk and Santa Clara as well as all of the smaller islets in the area. 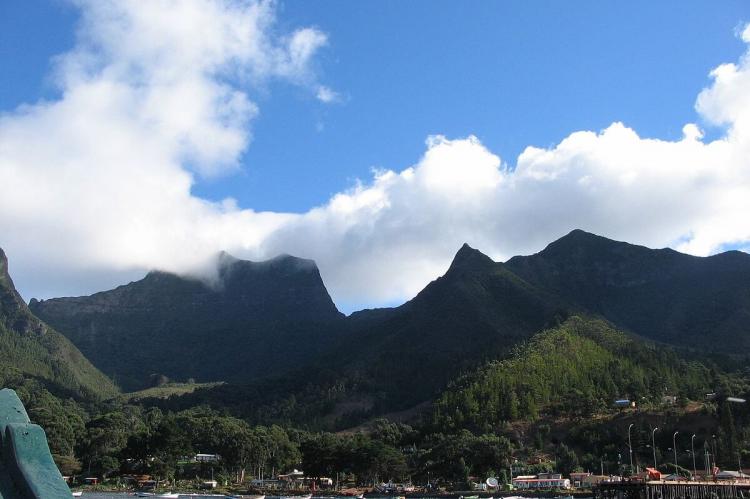 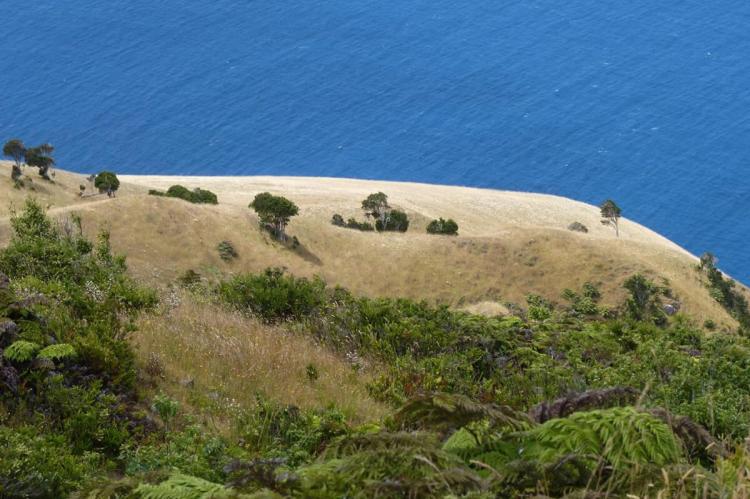 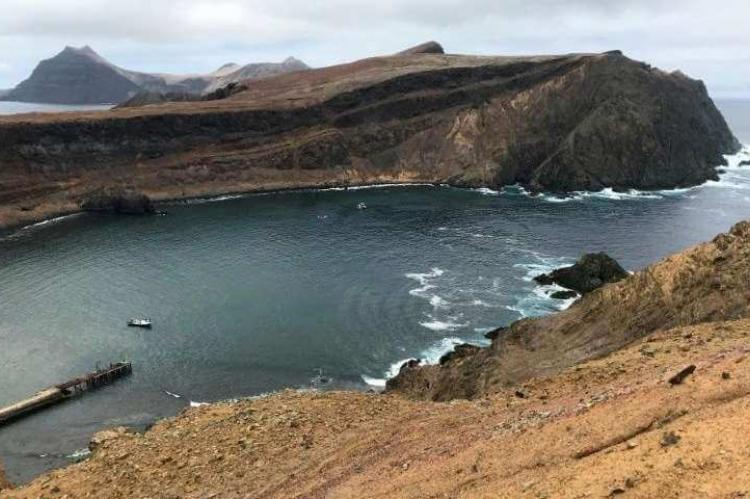 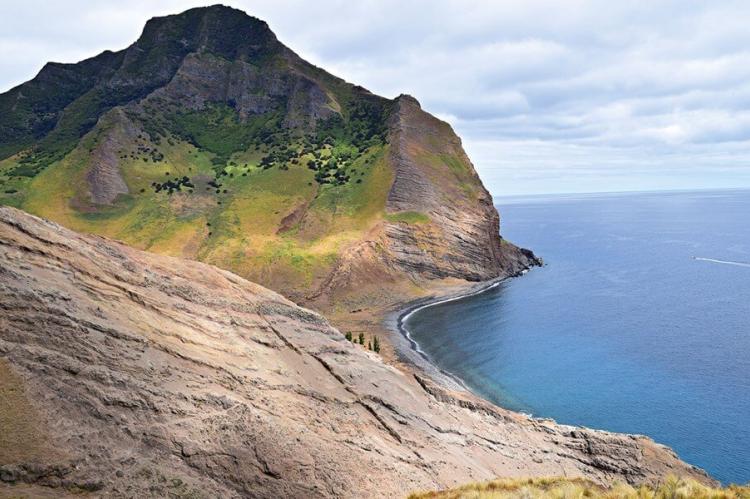 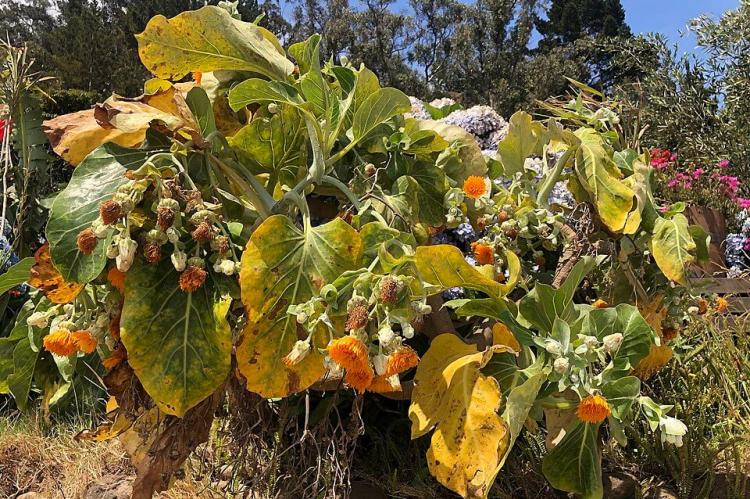 The Juan Fernández Islands (Archipiélago Juan Fernández) are a sparsely inhabited group of islands located in the South Pacific, approximately 670 km (416 mi) from South America, off the coast of Chile.

The archipelago is made up of three main volcanic islands: Robinson Crusoe, Alejandro Selkirk, Santa Clara and minor islets. The archipelago is part of Chile and administratively belongs to the Valparaíso Region.

The islands are primarily known for having been the home to the marooned sailor Alexander Selkirk for more than four years from 1704, which may have inspired Daniel Defoe's Robinson Crusoe.

Most of the archipelago's present-day inhabitants reside on Robinson Crusoe Island, mainly in the capital — San Juan Bautista — located at Cumberland Bay on the island's north coast.

The islands are volcanic in origin, produced by the movement of the Nazca Plate over the Juan Fernández hotspot. As the plate moved eastward over the hot spot, volcanic eruptions formed the Juan Fernández Ridge before being subducted under the South American continent at the Peru-Chile Trench. The islands occur where the peaks of the submarine ridge have protruded above sea level.

The archipelago was discovered on November 22, 1574 by the Spanish sailor Juan Fernández who was sailing south between Callao and Valparaíso along a route which he also discovered, hundreds of miles west of the coast of Chile which avoided the northerly Humboldt current. He called the islands Más Afuera, Más a Tierra, and Santa Clara.

In the 17th and 18th centuries, the islands were used as a hideout for pirates and became the location of a penal colony. It was during this period that Alexander Selkirk became marooned on the islands.

In the 1740's, they were visited by Commodore Anson's flotilla during his ill-fated venture to the South Seas. The location of the archipelago was fixed by Alessandro Malaspina in 1790; previous charts had differed on the location. British and American whaling vessels were regular visitors to the islands, starting with the London (Captain Joshua Coffin) in 1795.

The islands have a subtropical Mediterranean climate, moderated by the cold Humboldt Current, which flows northward to the east of the islands, and the southeast trade winds.

Rainfall is higher in the winter months, and varies with elevation and exposure; elevations above 500 m (1,640 ft) experience almost daily rainfall, while the western, leeward side of Robinson Crusoe and Santa Clara are quite dry.

The Juan Fernández islands are home to a high percentage of rare and endemic plants and animals, and are recognized as a distinct ecoregion.

The volcanic origin and remote location of the islands meant that the islands' flora and fauna had to reach the archipelago from far across the sea; as a result, the island is home to relatively few plant species and very few animal species.

The closest relatives of the archipelago's plants and animals are found in the Temperate broadleaf and mixed forests ecoregions of southern South America, including the Valdivian temperate rain forests, Magellanic subpolar forests, and Desventuradas Islands.

There are 209 native species of vascular plants in the Juan Fernandez Islands, approximately 150 of which are flowering plants, and 50 are ferns. There are 126 species (62 percent) that are endemic, with 12 endemic genera and one endemic family, Lactoridaceae. Many plants are characteristic of the Antarctic flora, and are related to plants found in southern South America, New Zealand and Australia.

Three endemic species dominate the tall and lower montane forests of the archipelago, Drimys confertifolia on both main islands, Myrceugenia fernandeziana on Robinson Crusoe, and M. schulzei on Alexander Selkirk.

An endemic species of sandalwood, Santalum fernandezianum, was overexploited for its fragrant wood, has not been seen since 1908, and is believed extinct. The Chonta palm (Juania australis) is endangered.

The Juan Fernández Islands have a very limited fauna, with no native land mammals, reptiles, or amphibians. Seventeen land and sea-bird species breed on the islands. The island has three endemic bird species, and two endemic subspecies. Introduced fauna by humans include rats and goats.

Robinson Crusoe Island is home to an endemic and endangered hummingbird, the Juan Fernández firecrown (Sephanoides fernandensis). This large hummingbird, about 11 cm (4 in) long, is thought to number only about 500 individuals.

In addition, the Juan Fernandez Islands may still support a third breeding petrel species, De Filippi's Petrel Pterodroma defilippiana , whose only other known breeding grounds are on the Desventuradas Islands.

The Magellanic penguin breeds on Robinson Crusoe Island within the archipelago The endemic Juan-Fernandez spiny lobster (without claws) lives in the marine waters (Jasus frontalis).

The Juan Fernández fur seal (Arctocephalus philippii) also lives on the islands. This species was nearly exterminated in the sixteenth to nineteenth century, but it was rediscovered in 1965.

The island was first named Juan Fernandez Island after Juan Fernández, a Spanish sea captain and explorer who was the first to land there in 1574.

Robinson Crusoe Island is the most populous of the islands in the archipelago, with most of the population living in the town of San Juan Bautista, at Cumberland Bay on the island's north coast.

The island was home to the marooned sailor Alexander Selkirk from 1704 to 1709 and is thought to have inspired novelist Daniel Defoe's fictional Robinson Crusoe in his 1719 novel. To reflect the literary lore associated with the island and attract tourists, the Chilean government renamed the island in 1966.

Robinson Crusoe Island has a mountainous and undulating terrain, formed by ancient lava flows which have built up from numerous volcanic episodes. The highest point on the island is 915 m (3,002 ft) above sea level at El Yunque. Intense erosion has resulted in the formation of steep valleys and ridges.

A narrow peninsula is formed in the southwestern part of the island called Cordón Escarpado. The island of Santa Clara is located just off the southwest coast.

The Juan Fernandez Biosphere Reserve is home to one third of Chile’s endemic birds with an almost equal level of marine resource endemism of close to 25%.

The protected area includes all of the Juan Fernández Islands; including Robinson Crusoe, Alexander Selkirk, and Santa Clara as well as all of the smaller islets in the area.

This volcanic archipelago became a National Park in 1935 and a designated UNESCO Biosphere Reserve in 1977. Two of the islands, Alexander Selkirk and Robinson Crusoe, are named for the sailor and his fictional alter-ego.

The Juan Fernández Archipelago is volcanic in origin, with steep, rugged mountain ranges with deep ravines. There are practically no flat areas. Various types of lava are found, some 400 m (1,300 ft) in depth. Robinson Crusoe Island has a central ridge some 20 km (12.5 ft) long rising 900 m (2,950 ft) above sea level and dividing.

The arid island, its treeless 'prados' and a zone with more humid habitats, Santa Clara Island is dry and uninhabited. Alexander Selkirk Island rises to a high plateau dissected by deep ravines with forest extending up to about 700 m (2,300 ft), and a peak of 1,650 m (5,400 ft).

The vegetation of the islands is characterized by a variety of unusual growth forms with nearly 60% endemism among the vascular species. 146 species of native flowering plants have been recorded, including one endemic family (Lactoridaceae), ten endemic genera and 97 endemic species.

The Juan Fernández Archipelago has a very limited fauna, with no native land mammals, reptiles, or amphibians. Seventeen land and sea bird species breed on the islands. The island has three endemic bird species, and two endemic subspecies.

The islands have a subtropical, temperate Mediterranean climate, but this varies depending on the island and is moderated by the influence of the cold Humboldt Current, which flows northward to the east of the islands, and the southeast trade winds. Temperatures range from 3 °C (37 °F) to 34 °C (93 °F), with an annual mean of 15.4 °C (60 °F). Higher elevations are generally cooler, with occasional frosts on Robinson Crusoe.

Over 510 people (1999) live on Robinson Crusoe Island in the settlements of San Juan Bautista at Cumberland Bay, engaged in fishing, agriculture and cattle raising. Alexander Selkirk Island is occupied by seasonal fishing settlements at Colonia from October to May.

Around 2,000 national and 700 international tourists annually visit the Biosphere Reserve. Tourism has been encouraged and eases economic dependence on the Juan Fernandez lobster.

Erosion caused by livestock grazing is the most serious threat and difficult to control on the steep volcanic terrain. The main goals of the Juan Fernandez Biosphere Reserve are to restore altered areas and develop environmental education, protecting wild populations of native species, and training in horticultural techniques and controlling livestock numbers.