The Scotia Sea is the area of water between the Drake Passage, Tierra del Fuego, South Georgia and the South Sandwich Islands, the South Orkney Islands and the Antarctic Peninsula. The Scotia Arc is an undersea ridge and island arc bordering the Scotia Sea. 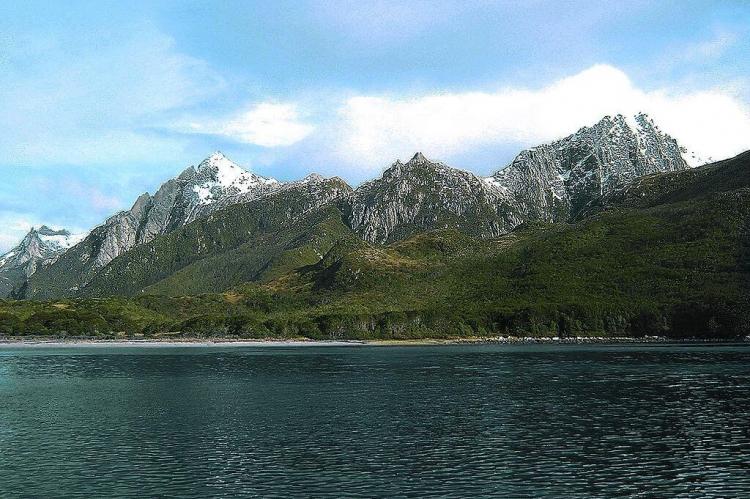 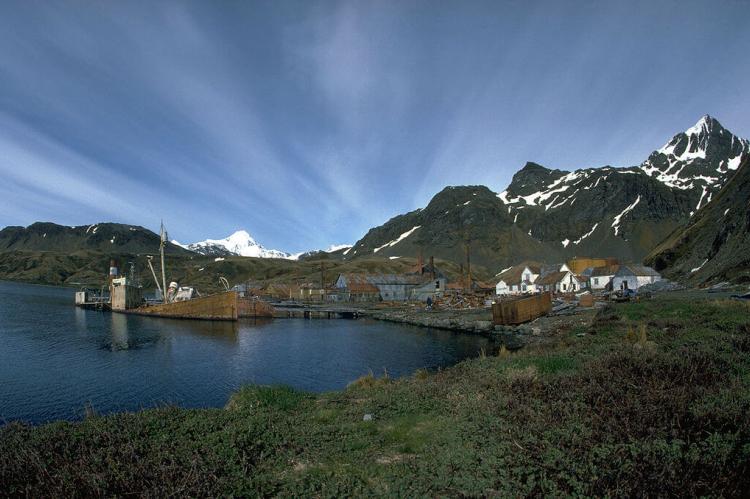 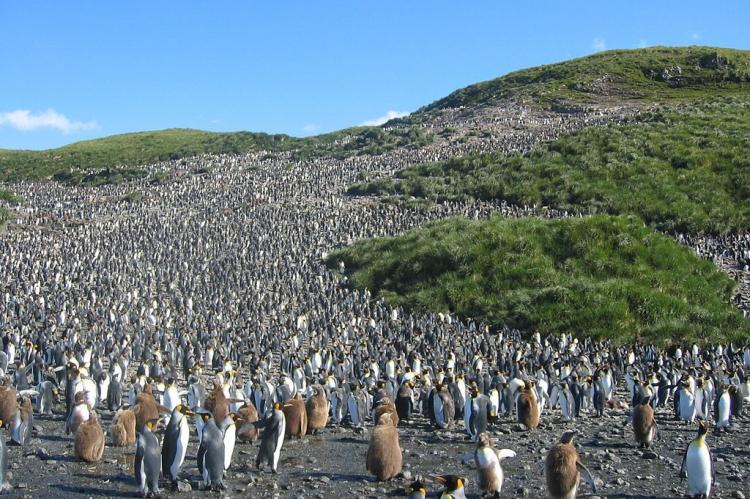 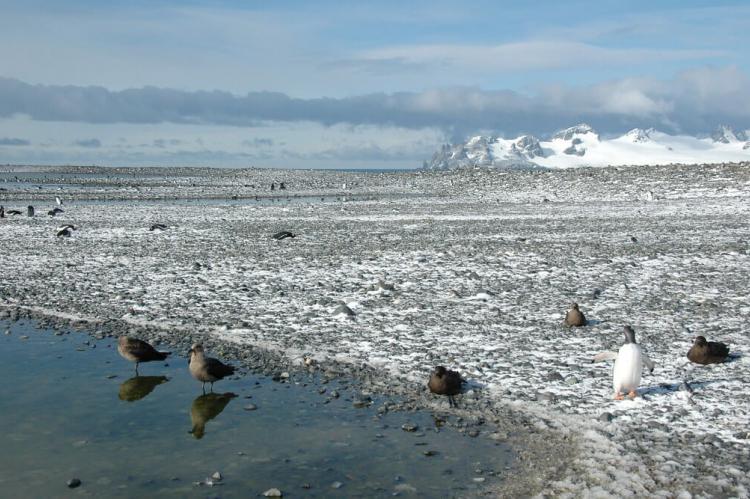 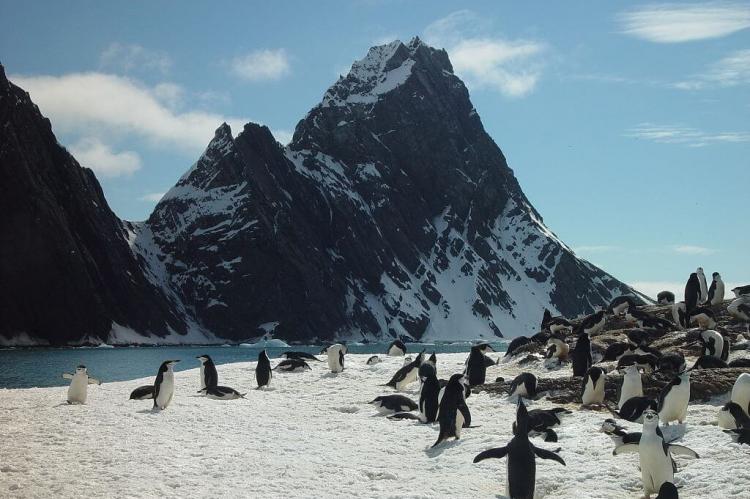 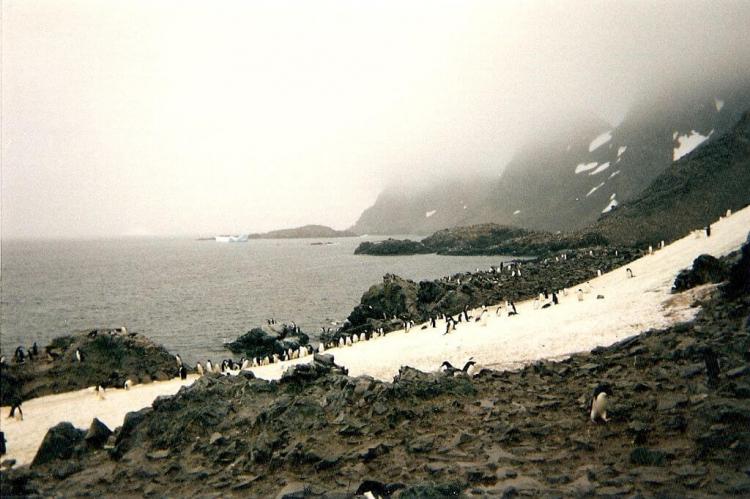 The Scotia Sea is an ocean region of approximately 900,000 sq km (347,500 sq mi) that is located between the South Atlantic Ocean and the Southern Ocean which surrounds Antarctica.

Named after the expedition ship Scotia, which explored the waters between 1902 and 1904, it comprises the area of water between the Drake Passage, Tierra del Fuego, South Georgia and the South Sandwich Islands, the South Orkney Islands and the Antarctic Peninsula.

The Scotia Sea is bounded on the west by the Drake Passage and on the north, east and south by the Scotia Arc, a submarine ridge which sits atop the Scotia Plate. 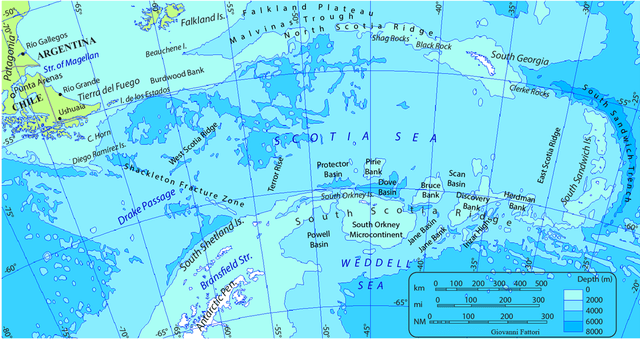 Map of the Scotia Sea including undersea relief, maritime, nearby lands, countries and cities

Formed by continental fragments that once formed a land bridge between South America and Antarctica, the Scotia Arc (also known as the Scotia Ridge) is an undersea ridge and island arc forming the north, east and south border of the Scotia Sea. It also surrounds the small Scotia and South Sandwich tectonic plates.

The Bransfield Strait separates the Scotia Arc from the South Shetland Islands and James Ross Island which flank the tip of the Antarctic Peninsula.

With an active volcanic arc-trench system at its eastern end, the Scotia Arc compares geologically to the similar Lesser Antilles Volcanic Arc in the Caribbean Sea. The Scotia Ridge region was thus given the name "Southern Antilles" by the early geologists Eduard Suess and Otto Nordenskjöld.

The Scotia Arc forms a discontinuous link between South America and Antarctica. Today, it is considered a continuation of the Andes and the antarctic part of the mountain range is called Antarctandes. It is also an important barrier between the Pacific and Atlantic Oceans and therefore for the Antarctic Circumpolar Current. 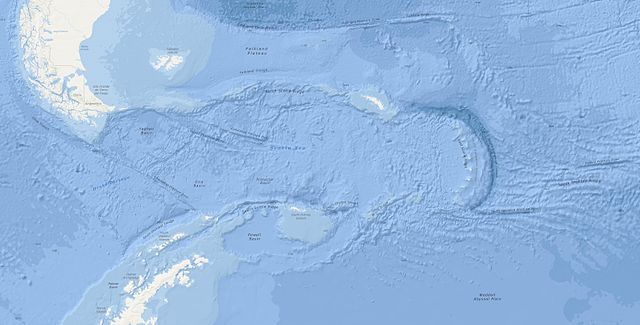 Topographic map of the Scotia Sea and Scotia Arc: NOAA

The islands bordering the Scotia Sea are rocky and partly covered in ice and snow year round. These areas support tundra vegetation consisting of mosses, lichens and algae. Seabirds, penguins and seals feed in the surrounding waters.

Only five species of birds remain on land on the islands and these include an endemic race of the yellow-billed pintail duck (Anas georgica) and the endemic South Georgia pipit (Anthus antarcticus). Other birds include the southern giant petrel, with sizeable colonies on Bird Island.